LAGOS, March 19 (Xinhua) -- Scores of bandits were killed in recent operations by Nigerian troops in the country's northwestern state of Zamfara, said an army spokesman on Friday. 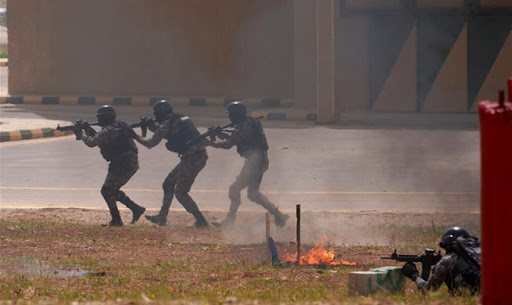 The army spokesman Mohammed Yerima said in a statement on Friday that troops of Operation Hadarin Daji successfully thwarted on Tuesday an attack by gunmen on Kabasa village in Magami local government area of Zamfara, killing "scores" of them while others escaped into the forest with bullet wounds.

Yerima said one soldier was killed and three others sustained various degrees of injuries during the encounter.

"Troops have dominated the general area with aggressive patrols and have continued further exploitation and pursuit of the bandits into the forest," said Yerima.

According to the spokesperson, on the same day, the troops of Operation Hadarin Daji also responded to a distress call that gunmen were attacking Gidan Goga village in Maradun local government area of Zamfara.

"Troops swiftly mobilized to the area and engaged the bandits with superior firepower, killing three while others fled in disarray, some with gunshot wounds," he said.

Nigerian troops have stepped up operations in the northern region which has witnessed a series of attacks by armed groups in recent months.