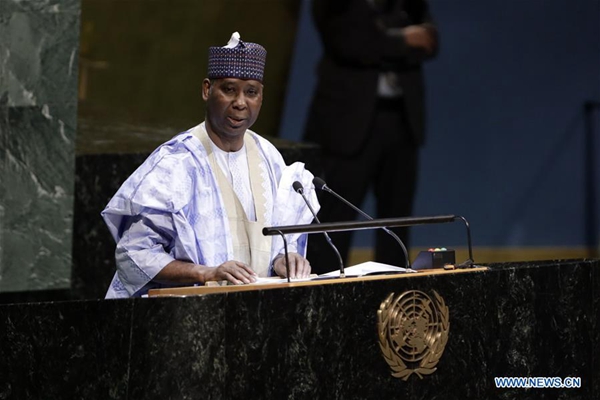 Tijjani Muhammad-Bande, permanent representative of Nigeria to the UN, addresses after he was elected as the President of the 74th session of UN General Assembly at the UN headquarters in New York, June 4, 2019. (Photo: Xinhua)

The United Nations General Assembly (UNGA) on Tuesday picked Tijjani Muhammad-Bande, permanent representative of Nigeria to the UN, to be its next president.

The 193-member General Assembly, one of UN's highest policy-making bodies, will have Muhammad-Bande presiding over its 74th session, which is scheduled to kick off in September.

Muhammad-Bande will be the second Nigerian UNGA president after Joseph Nanven Garba, who held the position between 1989 and 1990.

"The implementation of the existing mandates and the 2030 Agenda with particular focus on peace and security, poverty and education, zero hunger, quality education, climate action, and inclusion will constitute the major priorities of my presidency," Muhammad-Bande said after he was elected by acclamation to the top UNGA post.

"I am committed to promoting partnerships that are needed from all stakeholders to achieve our objectives and ultimately ensure that we do our best to ensure peace and prosperity, particularly for the most vulnerable," he added.

"We must continue to invest in sustaining peace and conflict prevention, given that our organization strives to save succeeding generations from the scourge of war," said the UNGA president-elect.

Speaking at an informal press conference about multilateralism after the election, Muhammad-Bande said that "a lot of problems cannot be solved through national effort alone," adding that "it is important to solve our problems collectively."

Noting that the UN has provided a platform for countries to negotiate, he said that "we just occasionally need to remind ourselves why the organization was created in the first place."

UN Secretary-General Antonio Guterres extended his warm congratulations to Muhammad-Bande on his election, noting that the new UNGA leader brings "many important and admirable qualifications to the job."

"As a Nigerian and an African, you have invaluable insights into the continent's challenges, such as the Sahel and Lake Chad basin, and more broadly into the challenges our world faces across the three pillars of our work, peace, sustainable development and human rights," said Guterres.

The secretary-general recalled that September will see "a crucially important series of meetings," including the Climate Action Summit and the Sustainable Development Goals Summit, and the high-level meetings on universal health coverage, small island developing states and financing for sustainable development, adding that he is looking forward to working with the president-elect in the coming year.

Noting that the president-elect "will be in office as we gear up to commemorate the 75th anniversary of the United Nations," the secretary-general said that it is "an occasion that I hope we can use to reaffirm the value of international cooperation and the vision of the (UN) Charter."

The office of the UNGA changes every year between the five geographic groups: African, Asian, Eastern European, Latin American and Caribbean, and Western European.

In full respect of the established principle of geographical rotation and General Assembly resolution 33/138 of Dec. 19, 1978, the president of the 74th session of the UNGA was to be elected from the African states.

In line with the new process, the president of the 73rd session of the UNGA convened an informal interactive dialogue with the candidate nominated by the Government of the Federal Republic of Nigeria on May 13.

Nigerian President Muhammadu Buhari on Sunday dispatched a delegation to New York to drum up support for the country's candidate in the election.

Muhammad-Bande is a Nigerian political scientist, administrator and career diplomat. He served as vice-president of the General Assembly during its 71st session which began in September 2016.

Muhammad-Bande taught at Usmanu Danfodiyo University, Sokoto, Nigeria, as a graduate assistant in 1980s and rose to the rank of professor in 1998 in the same institution. Between 2004 and 2009, he served as vice-chancellor of the university before being appointed director-general of Nigeria's premier policy institution National Institute for Policy and Strategic Studies, a position he held from 2010 to 2016. Previously, Muhammad-Bande served as the director-general of the African Training and Research Center in Administration for Development in Tangier, Morocco from 2000 to 2004.

He is married with four children and his hobbies include swimming, soccer, field hockey, farming and music.

Outgoing UNGA President Maria Fernanda Espinosa Garces, congratulating Muhammad-Bande on his election, said his various skills and experiences will serve the Assembly well "at a time of great challenges for multilateralism."

She expressed confidence that Muhammad-Bande will bring the strong and creative leadership that the organization requires as it works to become more relevant at a time of rapid global change.

Per tradition, the secretary-general, after the election of the 74th UNGA president, drew lots to determine which delegation would occupy the first seat in the General Assembly Hall during the 74th session. Ghana was selected for the first seat, to be followed in English alphabetical order by all the other countries, including in the Assembly's main committees.

The Assembly also elected, by acclamation, 15 vice-presidents of its plenary bureaus. Also joining the newly elected members as vice-presidents are the five permanent members of the Security Council -- China, France, Russian Federation, United Kingdom and the United States.