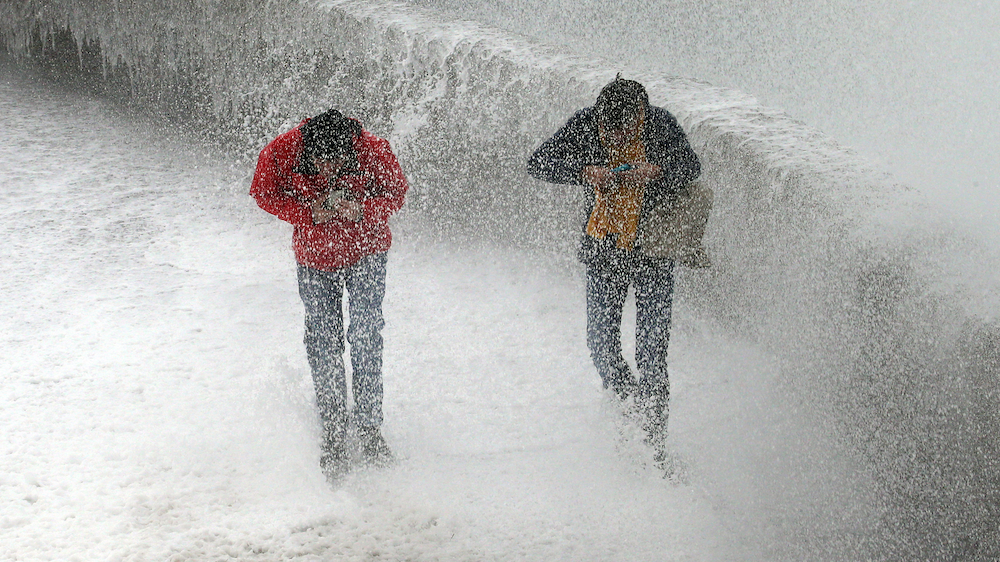 People escape a wave from the Atlantic Ocean, in Biarritz, southwestern France on 22 December 2019 (Photo: AP)

At least nine people are now thought to have died after powerful storms hit Spain, Portugal and France this week, causing widespread damage and floods.

Two storms struck the Iberian Peninsula in quick succession over the past four days, packing high winds and heavy rain.

The arrival of Storm Fabien on Saturday brought a fresh round of high winds and heavy rainfall to the region, just as Storm Elsa, which hit the Iberian Peninsula on Wednesday, began to subside.

In Spain's Galicia region, powerful waves crashed onto a promenade overnight on Sunday, with Spain's civil defense agency saying the latest front could bring winds of up to 140 km per hour (85 mph) and waves of up to nine meters (30 feet), to the country's northwest Atlantic coast.

The number of dead rose to nine on Sunday with the news that a fisherman had been swept off the rocks into the sea in Catalonia.

A 32-year-old South Korean woman died Saturday, a day after being struck on the head by falling debris from a building in central Madrid, the Madrid region's interior minister said Saturday.

Eight Madrid city parks were shut all day on Saturday because of the strong winds.

Emergency services in the southwestern region of Andalusia said a 68-year-old Dutch man who went missing while windsurfing in rough weather in Huelva province Friday had drowned.

Storm Elsa flooded rivers, brought down power lines and disrupted rail and air travel across the region. Storm Fabien has already brought winds of 170 kilometers (105 miles) per hour in Galicia in northwestern Spain.

Spain's national weather office put the entire coast of Galicia and the neighboring region of Asturias on red alert on Saturday - the highest in its four-scale alert scale - due to strong winds and high waves.

In Portugal, extreme weather interrupted train services between the capital Lisbon and the second city Porto after flooding on the rail tracks.

Portugal's civil protection authority said on Saturday the heavy rain and strong winds had felled trees and caused flooding and damage to infrastructure.

More than 250 people were evacuated from their homes in villages in central Portugal due to rising river waters, Portuguese news agency Lusa said.

EDP, the country's largest utility, said on Friday that thousands of people were without electricity due to storm damage.

One man died in Montijo, near Lisbon, on Thursday after a tree fell on his truck, and a second man was killed in Castro Daire, northern Portugal, when his house collapsed, officials said.

Big waves were expected along the Portuguese Atlantic coast on Sunday.

In France, parks and cemeteries were also closed in Bordeaux in the south west region on Saturday while the weather office placed 14 regions in the southwest of the country on orange alert with winds of up to 140 kilometers an hour on the coast.

The French Mediterranean island of Corsica's airports have been closed on Sunday because of the storm. Ferry services to the mainline have already been suspended.

A weakened Storm Elsa was over Britain late on Saturday, causing flooding and travel disruption in parts of the south east of England, but the authorities in France, Portugal and Spain all warned of a fresh threat.

Meanwhile, in Italy, twelve people have been rescued from a large ship off the Italian coast of Sardinia after it hit rocks during bad weather.

The crew were airlifted by helicopter in an operation that also involved two search and rescue boats. The ship was heading to Spain.