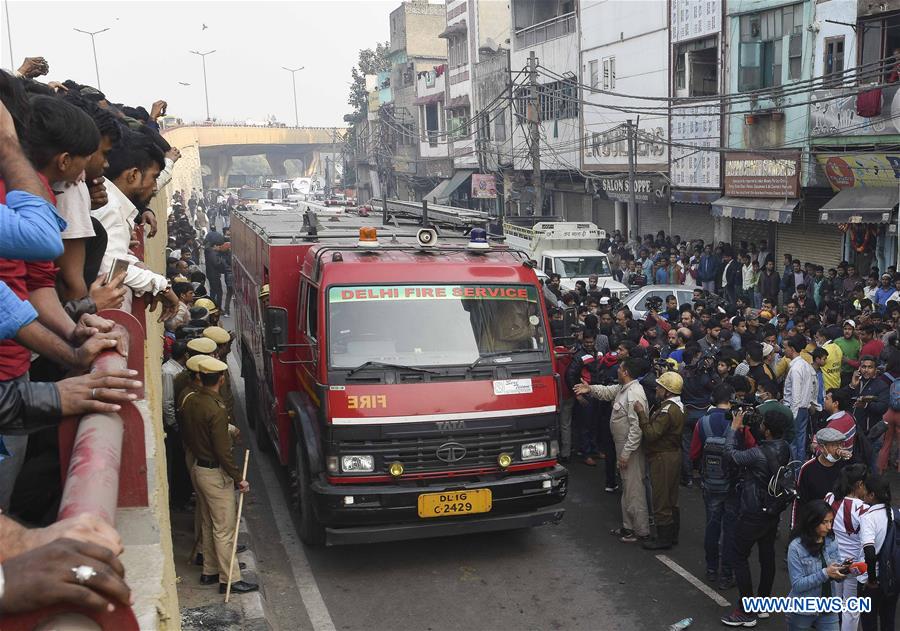 NEW DELHI, Dec. 23 (Xinhua) -- At least nine people, including four women and three children, died in Delhi in a fire that broke out in a residential building early on Monday, confirmed an official in the city's Fire Department.

The four-storey building is situated in Kirari area of northwest Delhi.

Speaking to Xinhua over phone, Assistant Divisional Officer (ADO) of the Delhi Fire Services (DSF) Ajay Kumar said that three people were fully charred to death beyond recognition. The fire was completely doused, and relief and rescue work still was going on, he added.

Three injured people could be rescued from the spot, he said, adding that one of the injured received 15 percent burn injuries, while the rest two suffered from breathlessness as they inhaled smoke and were being treated at a local hospital.

Kumar further said the fire broke out at around midnight.

"Prima facie an electric short-circuit seems to be the reason behind the fire, but final word could be said only after proper investigation by the Delhi Police," he added.

According to the official, the fire broke out on the ground floor of the building which was converted into a clothes-storehouse. The building is built on a plot measuring 50 square yards, added Kumar.

This was the second fire incident in the Indian capital city this month. On Dec. 8 as many as 43 people, mostly labourers, died in a devastating fire in north Delhi's Filmistan area. During the investigation it was revealed that the building was illegally built and running as a commercial unit without proper licenses and fire-fighting equipment.