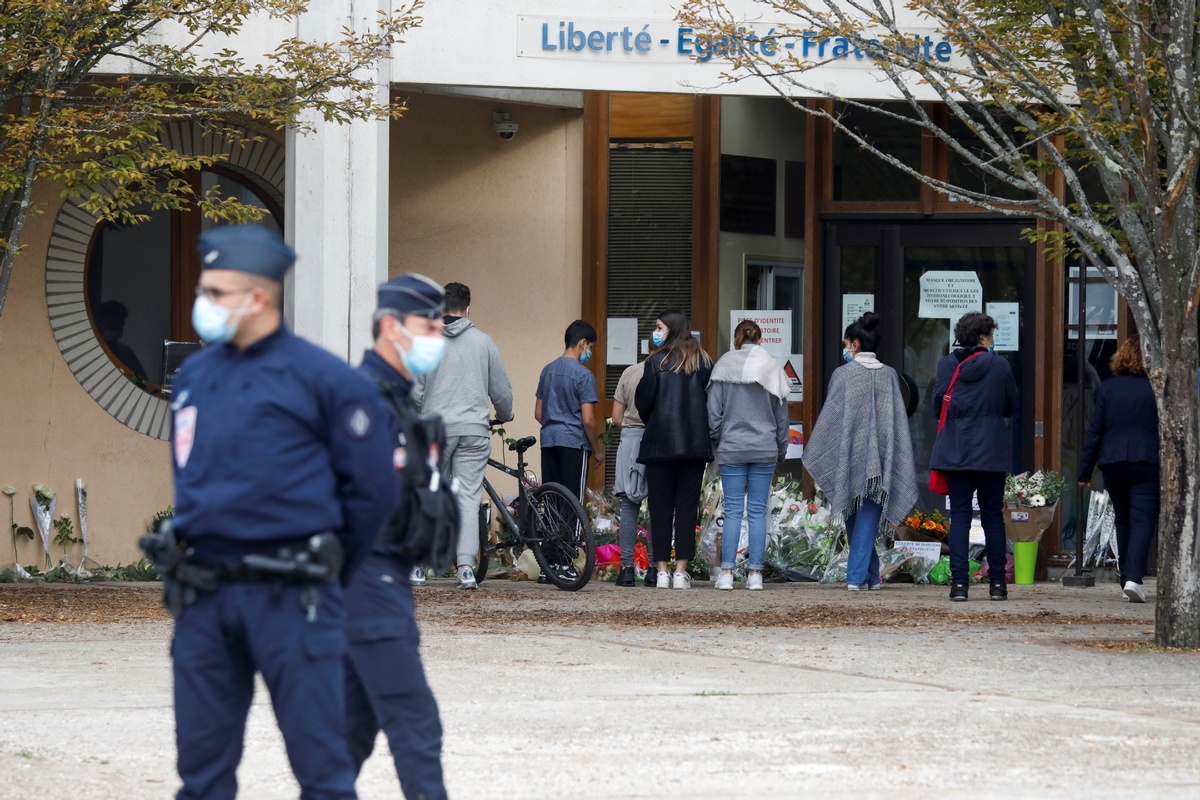 People bring flowers to the Bois d'Aulne college after the attack in the Paris suburb of Conflans St Honorine, France, Oct 17, 2020. [Photo/Agencies]

PARIS - Nine people have been detained in connection with the fatal knife attack targeting a teacher in northwest Paris, as investigators check whether the assailant acted alone or had accomplices, state-run France info radio reported on Saturday.

Four relatives of the suspected attacker -- his parents, grandfather and 17-year old brother -- were arrested in northern France's l'Eure, 100 km from the attack site.

Five others, including a parent of a pupil who disagreed with the teacher's move to show cartoons mocking the Prophet Mohammad in class, were also questioned over their role in the attack.

On Friday afternoon, a decapitated man was found in the street near a middle school in Conflans-Sainte-Honorin, a suburban area of northwest Paris. The victim was a 47-year-old history teacher who had reportedly shown to his students as part of a class on "freedom of expression" caricatures of Mohammad.

The suspected attacker was reportedly an 18-year-old man of Chechen origin and was unknown to police for radicalization. He was spotted by patrol police in an adjacent commune carrying a knife. He reportedly shouted "Allahu Akbar," or "God is Greatest," before the attack. Officers shot him dead after he refused to surrender, local media reported.

A national tribute is to be paid to the teacher, the French presidency said on Saturday. When visiting the attack scene on Friday evening, French President Emmanuel Macron vehemently condemned the "characterized Islamic terrorist attack" and called on the French public to stand together to combat terrorism and obscurantism.

The offices were the scene of an attack in January 2015 that saw 12 people killed, including many of the magazine's staff. Fourteen people are currently on trial over the attack.