Boko Haram members have killed nine farmers and abducted 12 others in a village in the northeastern Nigerian state of Borno, the cradle of the jihadist movement, locals told AFP Tuesday. 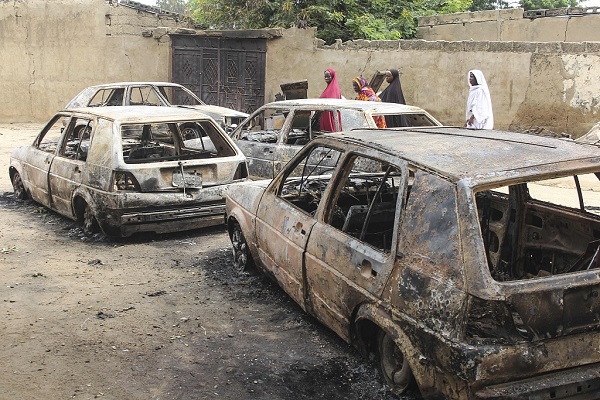 The wreckage of cars damaged by an attack on a market are seen on September 20, 2018, in Amarwa, some 20 kilometres (12 miles) from Borno state capital Maiduguri. (File Photo: VCG)

On Monday, they stormed into fields outside Mammanti village, opening fire on farmers as they worked, killing nine and injuring three others.

"The insurgents took away 12 people, including women, and macheted three people who resisted being abducted," Mammanti.

The jihadists came on bicycles in the afternoon, said Usman Kaka, a farmer who escaped.

"They just opened fire on us and continued to fire as we fled," Kaka said.

"We later returned to find nine people had been killed and three left with machete cuts on their heads for refusing to go with the gunmen," he said.

The attack on Mammanti forced residents to moved to the state capital Maiduguri from where they would commute daily to work on the fields.

Boko Haram has stepped up attacks on farmers and loggers in recent years, accusing them of passing information to the military.

Despite the government's insistence that Boko Haram is near defeat, the group has recently carried out major attacks on military and civilian targets, killing scores.

More than 27,000 people have died since the start of the insurgency in the remote northeast in 2009 and 1.8 million are still homeless.