No breakthrough in French pensions impasse 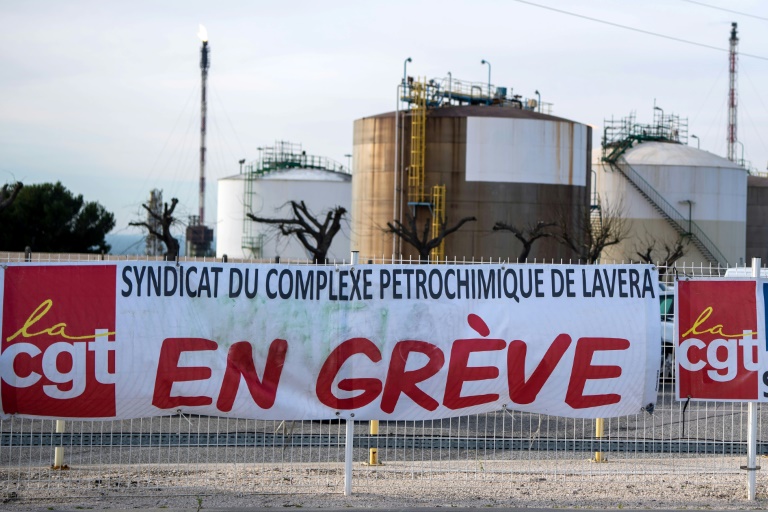 A CGT union banner reading "On Strike" Tuesday at a blocked oil refinery in Martigues, southern France, as part of protests over a pension reform. (Photo: AFP)

Talks between the French government and unions aimed at ending a 34-day transport strike failed Tuesday to break the deadlock over a planned pensions overhaul, one of the most hotly contested reforms launched by President Emmanuel Macron.

Macron's push for sweeping changes to the pension system has unleashed the longest transport strike in France in decades, causing weeks of travel chaos in Paris particularly.

As the standoff expanded to oil refineries, raising fears of petrol shortages, Prime Minister Edouard Philippe said that both sides needed to "budge a little."

While insisting the reforms would not be withdrawn, he made conciliatory noises about the government's proposals to extend the minimum age for receiving a full pension to 64 from 62.

The proposal, which aims to get the French to work longer, has prompted an outcry, including from the more moderate unions with which the government is hoping to do a deal.

"The pivot age (64) must be removed from the bill," said Laurent Berger, the leader of the moderate CFDT union, France's largest, giving the government an ultimatum to rescind the proposal by Friday.

Philippe said that if unions could come up with a better way of ensuring that the pension system remains solvent, "I will take it."

But the hardline CGT union, the biggest at state rail operator SNCF, continued to demand that the government scrap the reforms outright.

"The only overture we want to hear is, 'We're stopping everything'," CGT leader Philippe Martinez told France Inter radio.

On Tuesday, the strike hit oil refineries following calls by the CGT for a blockade of petrol shipments.

The government said five of the country's eight refineries were experiencing "temporary delivery difficulties" but the CGT insisted all eight were affected.

As the standoff continues, public support for the strike, which remained high throughout the first month, has begun to fall.

An Ifop poll gave it just 44 percent backing, down seven points from the previous survey on December 19-20.

The reform would eliminate 42 separate pension schemes that offer early retirement and other advantages, mainly to public-sector workers, in favour of a single system.

The CGT and FO unions have called for a new day of mass walkouts on Thursday, which could see schools shut and public transport even more impacted than usual.

Train operator SNCF says it has lost more than 600 million euros ($670 million) in ticket sales since the strike began on December 5.

The head of the Paris chamber of trades and crafts said retail sales in the capital were down by 30 to 40 percent.

As the weeks pass, the number of striking rail and metro workers has tapered off, partly due to lost pay.

"For now, we are gritting our teeth," Eric Challal, a striking customer service agent at Gare du Nord station in Paris, told AFP.

The strike is the longest continuous stoppage on French railways since the national rail service was created in the 1930s.

Macron made the pensions overhaul a key plank of his 2017 election campaign, saying a single, points-based system would be fairer, in particular for women and low earners.

The government has already made a series of concessions to the police, military, rail workers and Paris Opera employees, allowing them to continue to retire early or to keep their separate benefits for several years to come.

But most salaried workers born in 1975 or later would be impacted by the new system, in which people would earn points based on lifetime earnings.

Currently, most pensions are calculated on a worker's 25 best years of earnings -- public workers, however, get payouts based on their last six months.