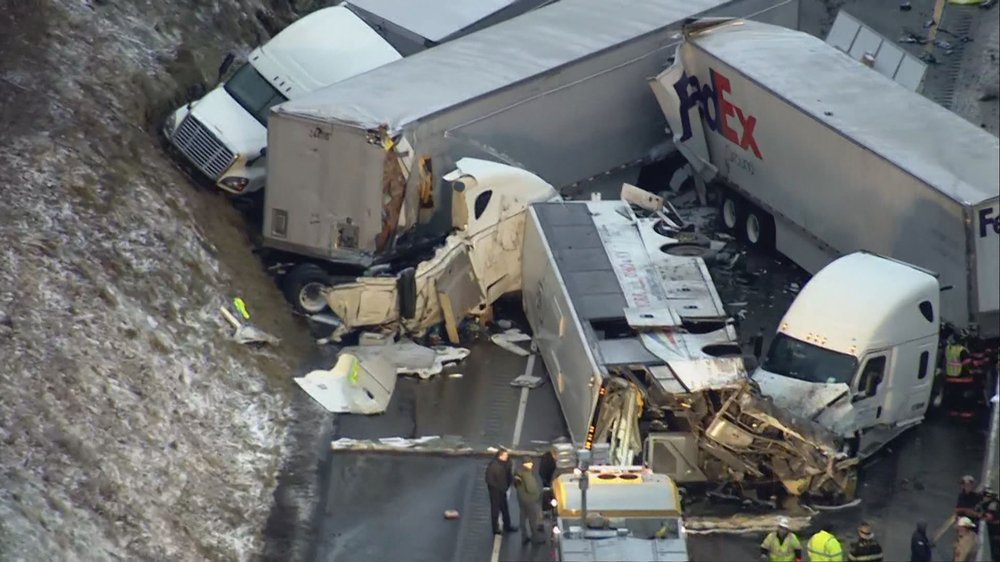 This image from video provided by KDKA TV shows the scene near Greensburg, Pa. along the Pennsylvania Turnpike of a crash early Sunday, Jan. 5, 2020 that involved multiple vehicles. (Photo via AP)

WASHINGTON, Jan. 5 (Xinhua) -- No Chinese nationals have been reported killed in a multi-vehicle crash that occurred in the U.S. state of Pennsylvania on Sunday morning, said the Chinese Consulate General in New York.

The crash, which happened at approximately 3:33 a.m. local time (0833 GMT) on the Pennsylvania Turnpike in Mount Pleasant Township, Westmoreland County, left five people dead and 57 hospitalized, according to U.S. authorities.

In a press release, the Chinese consulate general said it has not received any reports of Chinese nationals killed in the incident after it contacted local police and hospitals.

Among the injured, there are five overseas Chinese and Chinese studying in the United States, according to the release.

The consulate general said it has got in touch with four of them, who are all in stable condition. The other reportedly left with family.

The consulate general added it will stay in contact with relevant parties concerning the incident and provide necessary assistance for Chinese nationals concerned.

Pennsylvania State Police said in a press release that the crash involved a tour bus, three tractor trailers loaded with parcels and one private passenger vehicle.

"A tour bus was traveling on a downhill curve and struck an embankment. Commercial vehicles traveling behind, then struck the tour bus," the release said.

Pennsylvania Governor Tom Wolf tweeted that he was saddened to learn of the fatal pileup crash and that he was keeping victims and their families in his prayers.

The Red Cross is assisting the patients and their families at the hospitals.

The National Transportation Safety Board tweeted it was investigating the incident.