No COVID-19 testing at home yet but quicker options coming 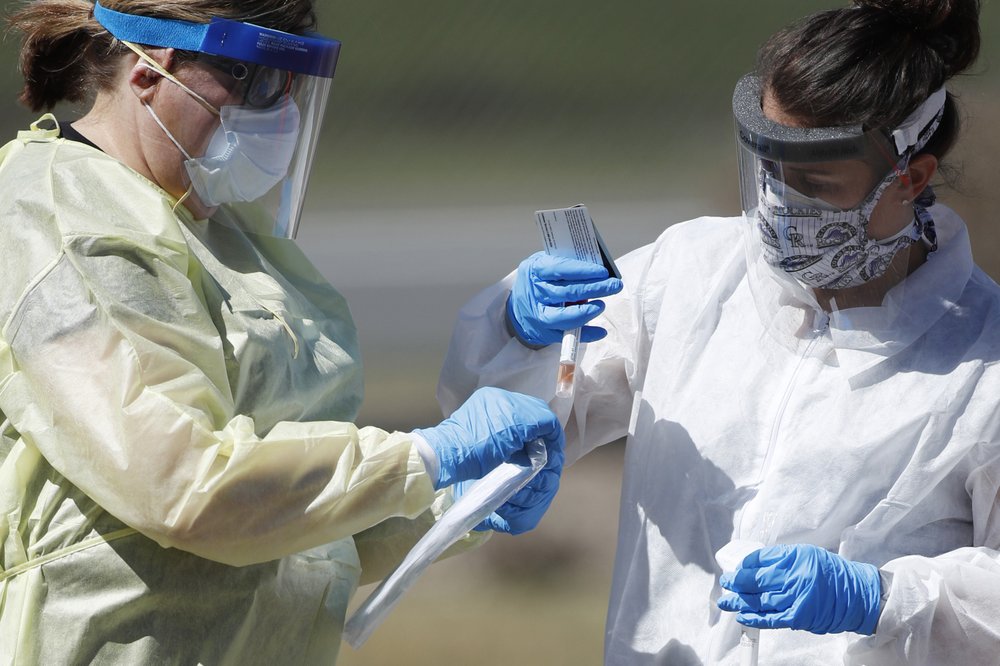 Medical technicians handle a vial containing a nasal swab at a drive-thru testing site in Wheat Ridge, Colorado, as a statewide stay-at-home order remains in effect in an effort to reduce the spread of the COVID-19 coronavirus, March 30, 2020. (Photo: AP)

Home testing for the new coronavirus may sound like a good idea, but US regulators say it’s still too risky.

They’ve stopped companies that quickly launched home-testing kits until they can show their products can accurately detect the virus.

For now, the only way Americans can get tested is at hospitals, clinics or drive-thru sites, with a doctor’s order.

After a botched rollout, testing in the US has ramped up thanks to high-volume testing machines and new rapid tests. Last week, federal officials said total tests topped 1.4 million, and labs are processing nearly 100,000 tests daily. That’s the threshold many experts say is needed to track the virus.

Still, testing continues to be constrained by shortages of medical supplies like gloves, masks, and swabs. And the widespread drive-thru testing proposed for parking lots at chains like Walmart, Walgreens, and Target has barely gotten off the ground.

Meanwhile, the Food and Drug Administration is aggressively pushing new options onto the market.

Genetic tests are the gold standard for detecting COVID-19 infections. New, quicker ones are replacing the original laboratory tests that have to be manually mixed and developed.

The idea behind both tests is the same: chemical solutions are used to isolate the virus from the patient sample, grab its genetic material and then reproduce it millions of times until it’s detectable with a computer.

New rapid tests such as the one by Abbott Laboratories automate the process, cutting the time from four to six hours to about 15 minutes.

“Essentially all of the reactions are squeezed into a little cartridge, so it’s a very nice, self-contained system,” said Dr. Bobbi Pritt, lab director at the Mayo Clinic in Rochester, Minnesota

The cartridges from Abbott and other companies run on small, portable electronic machines found in thousands of US hospitals, clinics, and doctor’s offices. That’s expected to increase testing beyond large universities, government, and commercial labs. Abbott said it plans to begin shipping 50,000 tests per day this month. The US officials said they’d go first to remote areas with less access to labs.

For now, only health care professionals can order a coronavirus test. Under current guidelines, priority is given to people with COVID-19 symptoms who fall into several high-risk groups, including hospitalized patients, health care workers and the elderly.

“If you’re not sick, you don’t need to be tested,” has been the mantra for weeks.

DON’T TRY THIS AT HOME

Accurately testing for coronavirus involves several steps, including carefully swabbing the nose or throat to collect a sample, placing it in a sterile tube, storing it below 46 degrees Fahrenheit and then shipping it to a lab within three days.

Health officials warn a number of things could go wrong if consumers try to swab, store and ship their own samples, potentially resulting in testing errors and undetected infections.

The FDA is talking to companies working on at-home kits, but they’ll be required to show that their results are comparable to those of people under professional care, agency spokesman Jeremy Kahn said in a statement.

Many of the proposed at-home tests aren’t like home pregnancy tests — they won’t provide instant results. The samples still need to go to a lab.

After several companies began shipping test kits last month, the FDA quickly intervened. No home tests have been approved and the products sent to US consumers were frauds, regulators said.

On March 20, the company announced plans to ship 10,000 testing kits to customers for $181 each. Within 24 hours, the FDA warning went out and Nurx’s plan was off.

Simpler, cheaper blood tests could also have a role in tracking the virus — and possibly expanding testing to the home.

The FDA is permitting companies to launch certain types of finger-prick tests that can detect whether people may have recently been infected.

Instead of detecting the virus itself, these tests detect proteins called antibodies that the immune system generates to fight COVID-19.

Public health experts hope that mass screening with antibody tests could eventually help track how the virus spreads and who might have built up immunity.

“We have this massive epidemic on our hands and if we really want to control it through testing we need to have it more readily available and on a repeated basis — potentially every week to know who is truly positive and negative,” said Harvard University’s Dr. Michael Mina.

Because the blood test is easy to perform and can be developed in 15 minutes — without laboratory equipment — some companies think it could become a viable home-testing option.

Scanwell Health is seeking approval for a home test using one developed by Chinese manufacturer Innovita and deployed by the Chinese government.

People who meet criteria through an online questionnaire would receive a test kit in the mail, take a blood sample and scan the test with a smartphone app. Next is an online consultation with a health professional who will deliver and interpret the results.

“The entire testing process happens within the home— nothing needs to be shipped back,” said Scanwell executive Dr. Jack Jeng.