The battle to be Britain's next prime minister enters its final straight on Wednesday with both candidates hardening their positions on Brexit, putting the future government on a collision course with Brussels. 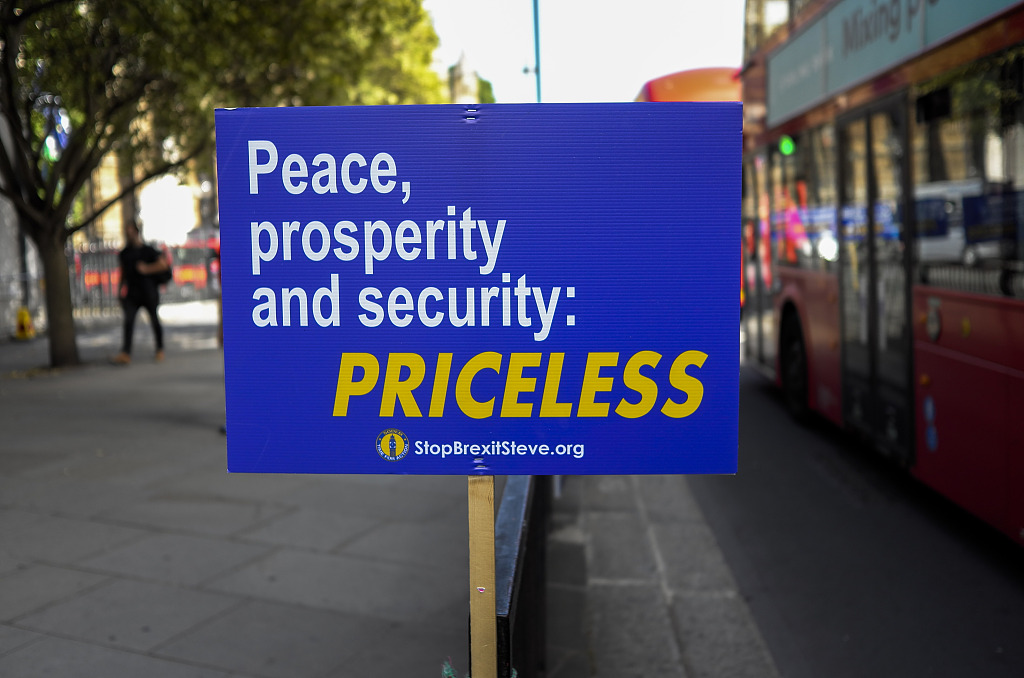 Anti Brexit Placards are pictured outside the houses of Parliament in London on July 11, 2019. (Photo: VCG)

Ex-London Mayor Boris Johnson, the favourite to replace Theresa May, and foreign secretary Jeremy Hunt, are now both referring to Britain's departure with no overall deal in place as a realistic prospect.

The business community and many lawmakers fear dire economic consequences from a no-deal Brexit which would lead to immediate trade tariffs for certain sectors including the automotive industry.

Johnson and Hunt are taking part in a final question-and-answer session later on Wednesday before the result of the vote by Conservative Party members is announced on July 23 and the new prime minister is installed on July 24.

Britain has twice delayed its scheduled departure from the European Union after 46 years of membership and May's failure to get parliament to vote for her deal with Brussels ultimately forced her to resign.

The two candidates have vowed to scrap a "backstop" provision in the draft deal that was insisted on by Brussels to keep the Irish border open.

Their latest attacks on the measure during a debate on Monday prompting a plunge in the value of the British pound.

The currency fell again Wednesday to its lowest level against the US dollar in over two years.

"The tougher stance from both Boris Johnson and Jeremy Hunt in terms of their rhetoric on Brexit is clearly weighing on the pound," said market analyst Neil Wilson.

"Make no mistake, this decline in the pound is down to traders pricing in a higher chance of a no-deal exit."

The backstop has proved a key stumbling block in the Brexit process.

The measure would keep open the post-Brexit border between British-ruled Northern Ireland and EU member the Republic of Ireland whatever the outcome of negotiations over the future relationship between London and Brussels.

Johnson announced early in his campaign that he would not sign up to it and would pursue a no-deal Brexit if required, leading his opponent to eventually follow suit.

"The backstop, as it is, is dead. We've got to find a new way," Hunt said at the pair's final head-to-head debate Monday, ahead of the announcement of the winner of the Tory party leadership battle Tuesday.

Britain's new prime minister is expected to be confirmed by Queen Elizabeth II the following day.