British government efforts to minimise border chaos should the UK leave the EU without a negotiated deal face "significant risks" that are largely outside its control, an audit said Wednesday. 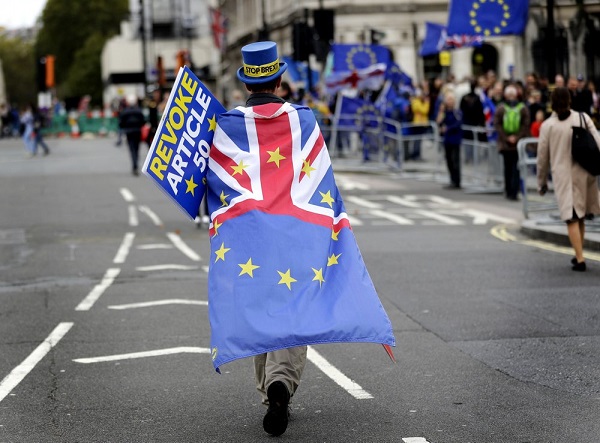 The government's own worst-case scenario assumes trade flows across the Channel slowing by 45 to 65 percent and taking up to a year to recover in full.

Prime Minister Boris Johnson has created a task force to make sure these do not cause food and medicine shipment disruptions that his government fears could spark riots on the street.

But "despite their efforts, significant risks remain which may have consequences for the public and businesses", NOA head Gareth Davies said in the office's updated preparedness report.

"The most significant risks to the smooth operation of the border remain and resolving them is now, to some extent, out of government's control," the report said.

Britain conducts most of its trade with the 27 EU countries through a handful of ports -- the one in southeast England's Dover running to Calais in France being the most signficant.

Britain's current membership in the EU ensures the free movement of goods. Lorries are waved through once they roll off ferries on both sides.

But Johnson has threatened to take Britain out of the bloc on October 31 even if negotiators fail to reach a settlement in Brussels that establishes new customs rules.

"In the event of a no-deal exit, the government has decided to prioritise security and safety; flow of people and goods; and then compliance activity, including the collection of revenue," the audit said.

But it noted that "business readiness" remain a risk.

Private companies would need to fill out complex new forms and follow international trade procedures for which many appear unprepared.

Many businesses have reported delaying expensive "no-deal Brexit" preparations because the deadline has been extended twice before -- and might be once again.

The other two main problems are "EU member states imposing controls, and arrangements for the Northern Ireland and Ireland land border," the audit said.

Negotiators have been unable to find an acceptable compromise for keeping the frontier between EU member Ireland and Britain's Northern Ireland free-flowing after Brexit.

An open border is a crucial element of the 1998 Good Friday Agreement that ended decades of deadly violence in Northern Ireland.