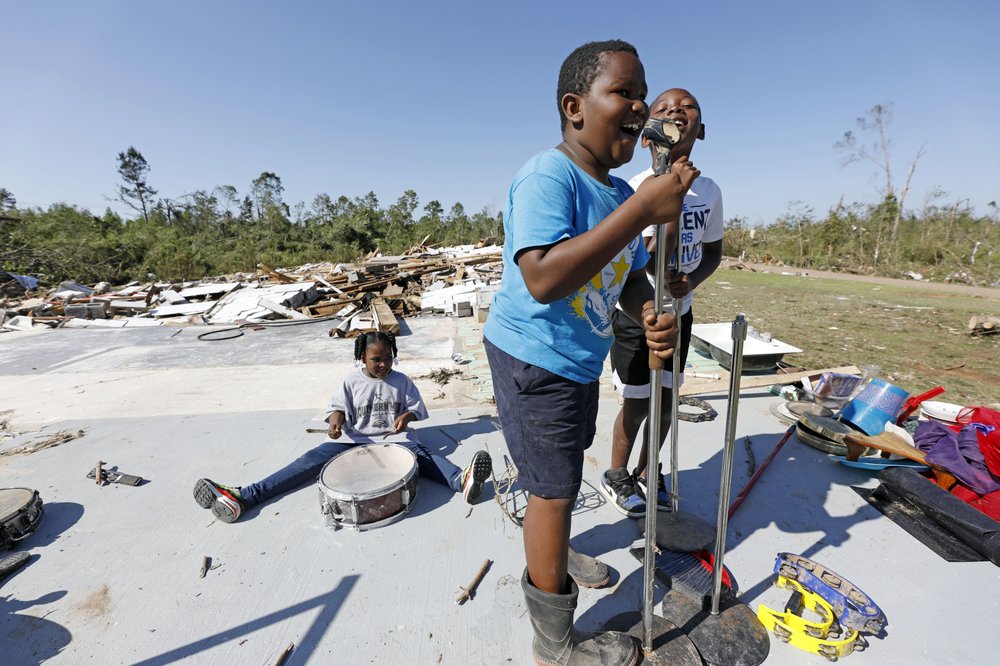 Kaden Poole, 10, foreground and his cousin Bralyn Washington, 9, sing a hymn while Ca'Loni Booth, 6, bangs away at what remains of the drum set on the slab that was James Hill Church in Prentiss, Miss., Tuesday, April 14, 2020. (Photo: AP)

For people who lost homes to the deadly tornadoes that rampaged across the South, there are no comforting hugs from volunteers or handshakes from politicians. For homeless families, there are no Red Cross shelters, only hotel rooms.

These and other changes reflect how disaster response has been affected by the coronavirus pandemic: Workers are still trying to provide all the help they can, but from a distance.

Within hours of the tornado onslaught, which began Sunday and killed more than 30 people, church groups were out in damaged communities, and Southern Baptist volunteers were told to avoid holding hands with people as they prayed, said Sam Porter, director of disaster relief for the nearly 15 million-member denomination. Hugs also are out.

“You’re talking about a very hard change in procedures,” Porter said Tuesday. “It’s agonizing. Jesus touched people all through his ministry. He created us as emotional beings. But we are trying to comply with the guidelines.”

About 550 people in four states were staying in hotel rooms funded by the Red Cross since mass shelters were not an option, said Brad Kieserman, a vice president of the organization.

People are being fed catered meals delivered to the hotels instead of through a large kitchen, he said, and workers are wearing masks, gloves and other gear when dealing with people affected by the storms. Other agencies are making similar provisions, he said.

“How ironic is it that the very thing that may unify people and unify communities is the condition in which we have to remain 6 feet apart,” Kieserman said.

The death toll from the outbreak rose to at least 34 as officials said a 12th person had died in Mississippi. There, Gov. Tate Reeves, who toured damaged areas, said the pandemic was making a bad situation worse.

“The fact that the coronaviruses exist is complicating the recovery from the tornado, while the tornadoes are complicating our efforts to make sure that we do everything in our power to stop the spread of the virus,” Reeves said during a stop in tiny Soso. “It is it is exceptionally complicated, and it’s tough on all of us.”

About 40 miles away in Prentiss, around 15 people wearing masks helped clean up amid the rubble of James Hill Church, which took a direct hit from a tornado. Pastor Sean Coney said breathing through cloth made the work more difficult, “but you can’t be selifsh” and risk spreading the virus.

“As difficult as it may be, you have to do it,” Coney said.

A twister left shingles, insulation and other debris strewn across Chattanooga, Tennessee. Almost every official on a tour of storm damage wore a protective mask, and some wore gloves. Instead of hugs and handshakes, Gov. Bill Lee and Mayor Andy Berke offered elbow bumps while talking to affected residents.

“We need money! We need that stimulus check now!” a person in a passing pickup truck yelled out to Lee as he visited with people cleaning around their home.

The storms claimed lives in at least six states, and the National Weather Service said preliminary assessments found evidence of at least 27 twisters. The strongest confirmed so far was an EF-4 tornado that devastated southeastern Mississippi with winds as strong as 170 mph (273 kph).

Hundreds of homes and businesses were damaged or destroyed across the region, and heavy rains caused flooding in some areas. Nashville, Tennessee, broke a 71-year-old record by receiving 2.23 inches (5.66 centimeters) of rain in a day, the weather service said. A day later, on Tuesday morning, the city saw snow flurries.

Damage occurred up the East Coast, with a flurry of tornado warnings issued in Delaware after storms left the Southeast.

With the economy already faltering because of business shutdowns and job losses linked to the pandemic, the storms hit the state’s $2.9 billion poultry industry. At least 90 poultry houses were damaged or destroyed, many near the city of Collins, the Mississippi State University Extension Service said.

“Although some houses were between flocks and empty, many of these houses had chickens in them,” poultry specialist Tom Tabler said in a statement. “Some would have been chicks just a few days old, while others would have been flocks nearly ready for harvest.”