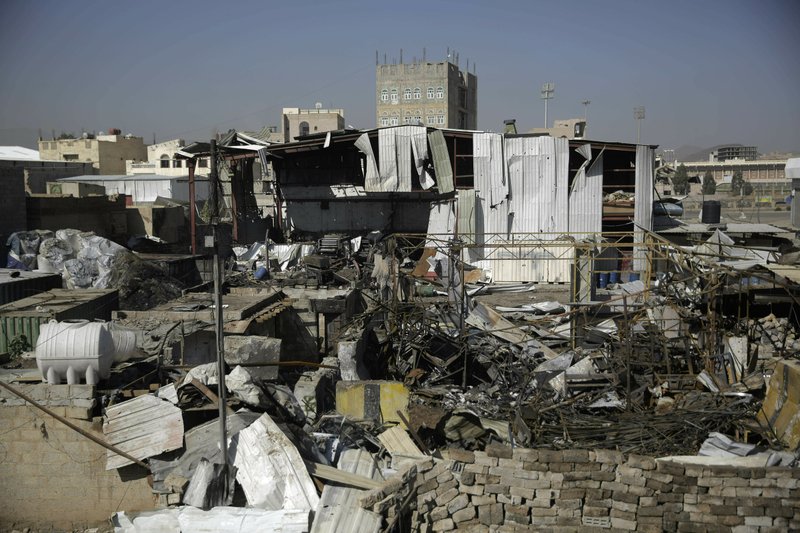 FILE - This April 10, 2019, file photo shows a view of the site of an airstrike by Saudi-led coalition in Sanaa, Yemen. (Photo: AP)

UNITED NATIONS, Jan. 16 (Xinhua) -- The top UN envoy for Yemen, Martin Griffiths, on Thursday breathed a sigh of relief over the fact that Yemen emerged from the recent Gulf crisis unscathed.

"Since I last spoke to this council (on Dec. 12), our region has been going through a crisis, the consequences of which have threatened the gains we have been observing in Yemen. Fortunately, the immediate crisis seems to be over," Griffiths told the Security Council in a briefing.

He was referring to the extraordinary tension at the beginning of the year between the United States and Iran after the U.S. killing of Qassem Soleimani, the commander of the Quds Force of Iran's Islamic Revolution Guards Corps. In retaliation, Iran launched more than a dozen missiles at two military bases housing U.S. and coalition forces in Iraq.

"I venture to say that through the actions of many people, Yemen has been kept safe from such crisis for now. This achievement... is based on a consensus that Yemen must not be affected by regional tensions," he said.

"Most importantly, in this time of crisis, we have seen no major acts of military provocation in Yemen. This is remarkable. Indeed, it has been one of the quietest weeks of the war in Yemen since the war began (in 2015)."

In the past few weeks, apart from one airstrike, there was very limited military movement on the ground and there were no drone or missile attacks on neighboring states, he noted. "So I hope it is not premature to say that Yemen has emerged at this time unscathed."

This achievement has not come by chance. Yemeni leaders and leaders of the region have deliberately exercised restraint and withheld from acts of provocation, said Griffiths, the UN secretary-general's special envoy for Yemen.

The de-escalation is no small thing, and the fact that it has been sustained even during a period of regional crisis is notable, he said. "These efforts should not be judged by whether they achieve a perfect ceasefire, but by whether the parties' energies are directed thereto, away from war. However, experience also tells us that military de-escalation cannot be sustained without political progress between the parties."

Despite an unsatisfactory record of implementation of the December 2018 Stockholm Agreement, the United Nations and the parties remain committed and as active as ever to implement the commitments, he said.

Although violence continues in the southern districts of the Hodeidah governorate, the relative calm at the front lines in Hodeidah city shows that the measures to enhance the de-escalation measures are working. "This is something we can build on," said Griffiths.

There has been considerable progress with regard to the entry of fuel ships in Hodeidah and the collection of revenues, he said.

Griffiths also sees the possibility of the start of "mercy flights" negotiated by the World Health Organization (WHO) with the Yemeni government and Houthi rebels over many months.

These flights will transport patients who need medical attention unavailable in Yemen to agreed locations abroad.

"In recent weeks, the WHO has benefited from an extraordinary array of diplomatic support to make these flights happen. We are now very close to seeing the first flight move 30 patients who are waiting in Sanaa for their treatment," he said.

Griffiths expressed his intention to convene the prisoner exchange committee, which was created under the Stockholm Agreement, in the coming days. He was encouraged by the release of six Saudi detainees by Houthi rebels on Jan. 1.

All the positive developments support the urgent search for a political solution and the end of the conflict in Yemen. That pursuit is not dependent on the success of any of them but reinforced by the success of all of them.

"With each positive step, we are brought closer to formally launching political consultations between the government of Yemen and Ansar Allah," said Griffiths, using the official name of the Houthi movement. "And indeed the significance and meaning of these initiatives that I have alluded to only become real in the context of the political solution to end the conflict."

"Yemen has been brushed by potential tragedy from regional tensions and, so far, appears to have emerged unscathed. This is evidence of the leaders' desire to keep Yemen safe from such tensions, but it's a fragile safety and one that needs our diligent and continuing attention if we are able to produce that promise to the people of Yemen that this year, they may see the peace they so evidently deserve," he said.