No plan B for growing Italian economy other than a prosperous relationship with China: former Italian official
By Li Qiang | People's Daily app
10:14, November 16, 2022

A prosperous relationship with China is essential for the sustainability of Italian growth, and “there’s no alternative,” said Michele Geraci, former undersecretary of state at the Italian Ministry of Economic Development. 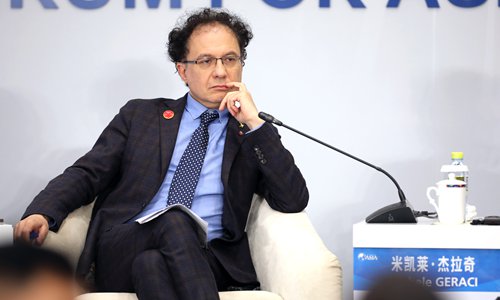 “During my public speeches when discussing the growing importance of China and Asia in the world, I always show a time series chart with China’s contribution to world GDP, starting two thousand years ago,” he said. “The audience immediately understands that this is not China or Asia rising. It is simply China and Asia getting back where they have always been, at the top, except for the last 200 years.”

“I think every head of government and policy maker should have this chart hung on the wall,” Geraci told the People’s Daily. “Many concerns or even worries put in that historical context would be easier to understand. They may not like it, but they will have to accept it. Geopolitical tensions may ease from a better mutual understanding of history.”

On November 4, German Chancellor Olaf Scholz led a delegation of senior business executives to Beijing. He was the first European leader to visit China after the 20th National Congress of the Communist Party of China. The trip, however, was made amidst skepticism and even opposition from Europe, Geraci observed.

Italy is an export-driven economy. Over the last 20 years, since the introduction of the euro, the Italian economy has grown on average less than one percent per year, basically flat. “But even this not so stellar performance has been due to a large growth in exports that compensated for weak performance of consumption and investment. Therefore, for us, trade is the only engine of economic stability. And with EU economies in trouble, the only source of growth of exports comes from China and the rest of Asia,” explained Geraci.

“German Chancellor Olaf Scholz has fully understood this concept, but other members of his government have not,” he said. “Here in Rome, I am working 24/7 to ensure that my friends in the government also understand this concept in the interest of Italy.”

Chinese President Xi Jinping arrived in Bali, Indonesia, on Monday for the G20 Summit, which runs from Tuesday to Wednesday under the theme “Recover Together, Recover Stronger.” On the sidelines, Xi met his US counterpart Joe Biden and held candid, in-depth exchange of views on bilateral ties as well as global issues.

China pledged to reform and build a global governance system that is inclusive and mutually beneficial to all to coordinate better cooperation for development and trade. Geraci said the issue of global governance and mutual benefit is crucial but is also a reason for geopolitical tensions.

“The US and China have philosophically different approaches to international governance,” he said. “The US believes that hegemony, both military and economic, is a necessity for the development of its own economy. They believe that they are inseparable parts of a dual approach. If one is missing, the other will be too and that would cause damage to their own society.”

“China instead believes in a shared approach, call it multipolar, that does not seek hegemony but cooperation,” he said.

It’s important for leaders to have bilateral closed-door meetings, where issues can be discussed, and a personal relationship can develop, he noted.