No plan for formal meeting between Trump, Saudi crown prince at G20 summit

US National security adviser John Bolton said on Tuesday that US President Donald Trump and Saudi Crown Prince Mohammed bin Salman are not expected to hold a formal bilateral meeting during the Group of 20 (G20) summit in Argentina. 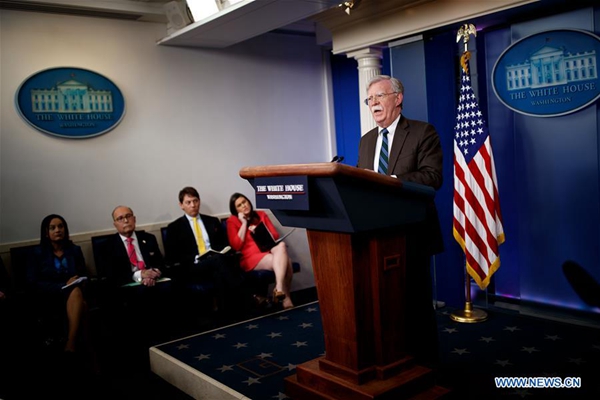 US National Security Advisor John Bolton speaks at a press briefing at the White House in Washington D.C., the United States, on Nov. 27, 2018. (Photo: Xinhua)

In a press briefing at the White House, Bolton, when asked to confirm whether Trump will meet with the Saudi leader, said that Trump's "bilateral schedule is full to overflowing at this point."

However, he did not exclude the possibility of the two leaders' informal meeting.

Bolton also said that Trump, during his stay in the South American nation, is expected to meet with the presidents of Argentina, South Korea, Turkey, Russia as well as Japanese Prime Minister Shinzo Abe.

Trump's meeting with Abe "will transform at some point during that meeting into a trilateral meeting" with Indian Prime Minister Narendra Modi, Bolton added.

Also at the press briefing, White House spokesperson Sarah Sanders said that Trump's "participation in the G20 summit is a key opportunity to reiterate his commitment to domestic and global economic growth and prosperity, cement relations with other world leaders and advance a global economic system that is based on fair economic competition and free, fair and reciprocal trade."

Speaking of the prospect of US-Saudi leaders' meeting, Sanders said she would not rule out any interaction, adding that Trump will also meet with German Chancellor Angela Merkel.

The Guardian reported earlier on Tuesday that the White House is preventing the CIA director, Gina Haspel, or any other intelligence official, from briefing the Senate on the death of a Saudi journalist and The Washington Post columnist, Jamal Khashoggi.

US Secretary of State Mike Pompeo and Defense Secretary James Mattis were due to give a briefing on the US-Saudi relations to the Senate on Wednesday, ahead of a vote that could possibly cut off US support for Riyadh's military operation in Yemen.

US media reported earlier that the briefing would also focus on the Saudi role in the death of Khashoggi, and whether to impose further sanctions on the kingdom.

After releasing the results of its initial investigation, the Saudi Public Prosecution announced that 18 Saudis were arrested for their alleged connections with the killing.

The US Congress has urged a thorough investigation into the murder of Khashoggi, and threatened to take more actions against Saudi Arabia if those responsible were not held accountable. However, the Trump administration has been reluctant to further punish the Saudi government, citing alliance significance and Saudi Arabia's purchase of US military equipment.

The US Treasury imposed sanctions on 17 individuals over their alleged roles in the killing of Khashoggi earlier this month, following US State Department's decision in late October to revoke 21 Saudi suspects' visas.