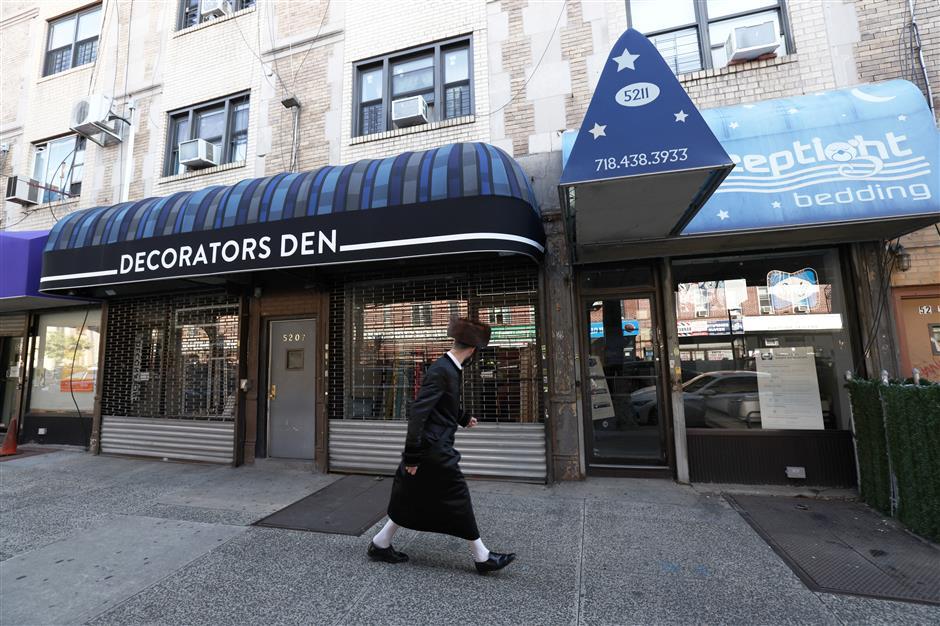 A man walks past a closed business in the Borough Park neighborhood of Brooklyn on October 7, 2020, in New York City. (Photo: Xinhua)

Non-essential businesses in the areas of severe outbreak of coronavirus in New York City will close for a minimum of 14 days beginning Thursday, said Mayor Bill de Blasio on Wednesday.

In these areas in South Brooklyn, Central Queens and Far Rockaway, which are called "red zones" due to their pandemic severity, schools are already closed, and the closure of non-essential businesses the next few weeks will be critical to stop this outbreak in its tracks, de Blasio tweeted.

"We know this is hard. We know we're asking families, small business owners and every New Yorker who calls these clusters home to make a huge sacrifice. But this is about protecting the health of our entire city. The faster this shutdown happens, the sooner it's over," said the mayor.

"It will take all of us working together to fight back against the clusters," he added.

The shutdown comes after the mayor announced on Sunday to close all the non-essential businesses in nine Zip Codes that have seen about 3 percent positivity of coronavirus tests for seven consecutive days.

The public and non-public schools in these Zip Codes were closed on Tuesday, though some of them, especially the private ones, had a different voice.

New York State governor Andrew Cuomo on Monday objected to the closure of the non-essential businesses in the Zip Codes, but agreed with the decision to close the schools for weeks.

The governor has not yet responded to the mayor's announcement on Wednesday, only tweeting that "In the hotspot Zip codes (of New York State) the positivity rate (of COVID-19 test) is 5.1 percent. We are taking quick action to respond to the clusters & stop the spread."

According to the Center for Systems Science and Engineering at Johns Hopkins University, the US coronavirus death toll stood at 211,532 as of Wednesday afternoon, and the number of confirmed cases reached 7,538,550. New York remains one of the worst-hit states in the country.