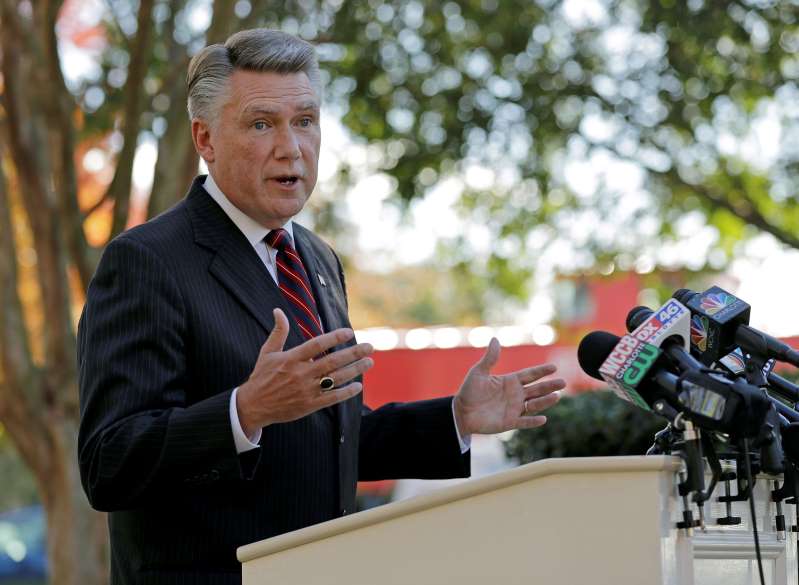 In this Nov. 7, 2018 file photo Republican Mark Harris speaks to the media during a news conference in Matthews, N.C. (Photo: AP)

The dissolution of North Carolina's elections board Friday injected further uncertainty into a still-undecided congressional race as the Democratic governor sought an interim panel to investigate ballot fraud allegations while Republicans argued he doesn't have the power to do so.

Democratic Gov. Roy Cooper announced he would appoint an interim Board of Elections after a three-judge state court panel ruled Thursday that the current board should disband at noon Friday. Cooper's move would fill the gap — and allow the board to proceed with a Jan. 11 evidentiary hearing about the 9th District congressional race — until a new law governing the statewide elections panel can take effect Jan. 31.

But the chairman of the state GOP, Robin Hayes, argued that Cooper's proposal was an "illegal sham" and said no Republicans would participate, complicating Cooper's efforts.

The state Elections Board has refused to certify the race between Republican Mark Harris and Democrat Dan McCready while it investigates absentee ballot irregularities in the district in the south-central part of the state. Harris holds a slim lead in unofficial results, but election officials are looking into criminal allegations against an operative hired by the Harris campaign.

Friday's standoff was set in motion by the latest ruling from a state court that previously had found the elections board's makeup unconstitutional after the Republican-controlled legislature altered the board in 2016. The court had ruled earlier this year to allow the board to remain in place until Friday while it investigates the congressional race. The latest ruling came as lawmakers enacted a new law Thursday to largely restore the board to how it operated before 2016.

Cooper started the process of rebuilding the elections board Friday by informing the state Democratic and Republican parties that he plans to create an interim panel with five members of the current elections board, unless he receives different picks from the state parties. The interim board would last until the new law takes effect Jan. 31.

He said he would appoint both Democrats and Republicans to comply with pre-2016 state elections law he says is temporarily back in force.

"All of these members have election law experience and an awareness of the circumstances around the allegations involved in the Ninth Congressional District election. They have all cleared ethics and conflicts checks and new members would require extra time to have that process completed," Cooper said in his letter to state party heads.

But Hayes said the dissolving board's four GOP members "will not accept appointments to an unconstitutional, illegal sham Roy Cooper creation." Republicans instead will withhold GOP nominees until the new law takes effect, he said.

Also Friday, Harris asked the elections board to certify him the winner before it dissolved so he could be seated in Congress when it convenes Wednesday. The outgoing board turned down his request.

Democrats, who are scheduled to take over leadership of the U.S. House next week, have said they won't swear Harris in to the seat until North Carolina elections officials resolve questions surrounding his contest. The U.S. Constitution states that the House is the judge of the elections of its members and the final arbiter of contests.

The elections board reorganization threatened to delay the Jan. 11 hearing. Lawyers for Harris and McCready had a Monday deadline to submit requests to the elections board for people they wanted to have compelled to appear and testify at next month's hearing. But if the current elections board is disbanded without a new one to replace it, the board chairman or vice chairman who could issue the requested subpoenas wouldn't exist.

Last week, elections board chairman Josh Malcolm said in an affidavit to the three-judge panel that investigative staffers — who can continue working through any reorganization — had collected more than 182,000 pages of materials in response to 12 subpoenas.

Malcolm said Friday that the elections board issued "numerous additional subpoenas" before disbanding. In a letter to Harris' attorney, Malcolm wrote that the GOP candidate had turned over only about 400 pages of subpoenaed documents and had yet to produce another 140,000 documents. Harris also had so far failed to arrange a requested interview with agency staffers, Malcolm said.

The judicial panel's ruling came the same day the Republican-led General Assembly ended a two-year power struggle with Cooper over elections board control. In 2016, the legislature voted to upend a law that for a century had given the governor and his or her political party the majority on local and state boards that oversee elections. Cooper sued and eventually won.

The legislation passed into law Thursday largely returns elections, ethics enforcement and lobbyist reporting to how they were before Republican lawmakers changed them in late 2016.