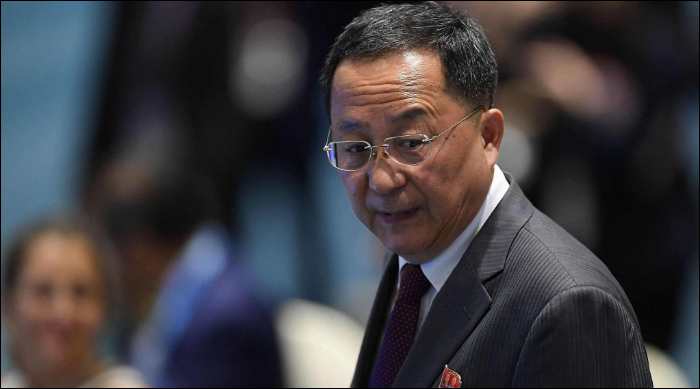 The Democratic People's Republic of Korea (DPRK) says it is determined to uphold the joint declaration made with the US in Singapore in June.

The country's foreign minister, Ri Yong Ho said that it's important for both sides to take "simultaneous actions and phased steps" at the Association of Southeast Asian Nations (ASEAN) Regional Forum in Singapore.

"We have initiated goodwill measures of, inter alia, a moratorium on nuclear tests and rocket launch tests and dismantling of nuclear test ground," Ri said.

"However, the United States, instead of responding to these measures, is raising its voice louder for maintaining the sanctions against the DPRK and showing the attitude to retreat even from declaring the end of the war, a very basic and primary step for providing peace on the Korean Peninsula."

"The DPRK stands firm in its determination and commitment for implementing the DPRK-US Joint Statement in a responsible and good-faith manner,” said Ri. "What is alarming, however, is the insistent moves manifested within the US to go back to the old, far from its leader's intention."

He said he hoped the international community could take more constructive measures to help it meet its goals.

Ri and US Secretary of State Mike Pompeo shook hands and exchanged words and smiles during a group photo session at the forum.

Pompeo pressed Southeast Asian nations at regional meetings in Singapore this week to maintain sanctions on the DPRK but said he was optimistic that the deal to end its nuclear program would be implemented.

The US State Department spokeswoman Heather Nauert told reporters traveling with Pompeo that the US delegation delivered a letter from President Donald Trump for DPRK leader Kim Jong Un to Ri at a security forum in Singapore.