○ North Korea officially opens up a cosmetic factory to the media for the first time.
○ North Korean scientists figure their brand is running neck and neck with Chanel by four main metrics, and superior in safety, said the factory's chief engineer.
○ Russia placed its first order this month, and the cosmetics are being exported to other nations. 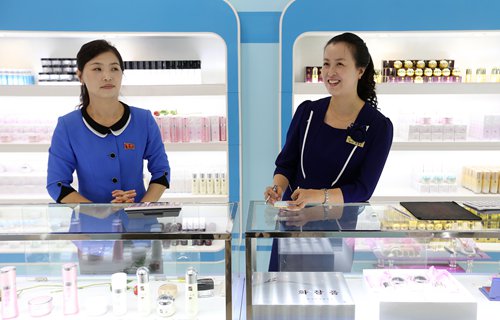 Wandering on the streets of Pyongyang, it is not hard to notice that women in the capital city of North Korea care about their dress and appearance a lot despite the country's underdeveloped economy.
Local residents believe that cosmetic products in North Korea are gentle, simple and elegant, just like women in this country.
Global Times reporters visited the Pyongyang Cosmetics Factory on September 8, uncovering the beauty secrets of North Korean women.
It is also the first time that North Korean authorities opened up about the domestic cosmetic industry to the media.
Beloved leader
Located in the Pyongchon-guyok district of downtown Pyongyang, the Pyongyang Cosmetics Factory's best-known brand is Unhasu, one of the two main brands in the country.
Driving a car into a factory yard surrounded by manufacturing workshops, the first impression left to this reporter is quietness and tidiness. Surprisingly the place is free from the smell of chemicals. 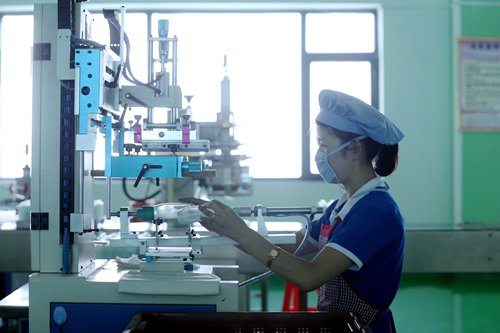 A worker tests the products in the Pyongyang Cosmetics Factory on September 8. Photo: Cui Meng/GT

Like other factories in North Korea, there is a small museum attached to the factory exhibiting photos and items showcasing the three North Korean leaders' visits to the factory and the glorious history of the factory in past decades.
North Korean leader Kim Jong-un visited the factory twice from 2015 to 2017, instructing the factory to produce "world's best cosmetics" to rival internationally renowned cosmetics brands.
An LED screen displays the comparison results between Unhasu and several leading cosmetics brands around the world including Shiseido and Chanel on the four indexes stability, safety, sensation and effect.
"Our beloved leader sent us 138 kinds of cosmetic products from different world-famous brands, and we have made a detailed analysis," Lee Seon-hee, the chief engineer of the cosmetics factory, told the Global Times.
"We developed our own products on the basis of the analysis. As you can see, our products have caught up with or even surpassed these international brands in terms of nutrition constituents," Lee said proudly.
As the LED screen shows, moisturizing creams from Unhasu and Chanel are running neck and neck over three indexes, and Unhasu even beats Chanel on safety.
Lee explained to the Global Times that many of their cosmetics contain abundant extracts from plants and animals that grow or live in North Korea, and this is the reason why the products of the Pyongyang Cosmetics Factory are safer compared with competitors' products.
"People use cosmetics to stay young. Therefore, we got a grip on the research and development of anti-aging products with sheer medicinal materials that boast natural effects, and the extraction is also done in our factory with high-tech equipment," Lee told the Global Times. 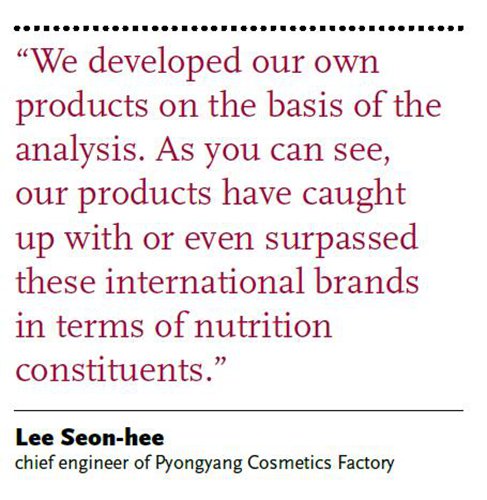 The second floor is a manufacturing workshop for Unhasu lotion, where production line management has been automated. In order to prevent contamination, the entire production area is absolutely isolated from the outside, with only few workers patrolling along the production line in contamination suits complete with respirators.
It looks like a big international top-class factory.
"Our beloved leader paid visits to this cosmetics factory on February 4, 2015 and October 27, 2017, and provided us precious maxims. Under his leadership, we have seen a significant improvement in 'combat power,' as a result, the production capacity in our factory increased sixfold, and our number of product categories also proliferated by several times," Lee told the Global Times.
"Our priority is to meet the domestic demand for cosmetics, and we are striving constantly to ensure the quality of our products overtakes other international brands and make sure our people get access to cosmetics of higher quality," said Lee.
"By then, the quality of our products will be recognized by the world. If other countries want to place an order, we can also fulfill their demands as we have adequate production capacity," she said.
On a globe placed in the exhibition hall, several small red flags were pinned on some countries including Russia, Iran, Cyprus and Australia.
Lee explained to the Global Times that the marked countries are the export destinations their cosmetics will be shipped to in the near future.
"We got an order from Russia this month, and that's why we are stepping up manufacturing," said Lee. But the chief engineer refused to reveal detailed information about the order, saying that it is a business secret.
Word of mouth
The Pyongyang Cosmetics Factory says it produces more than 300 kinds of products with reasonable prices ranging from a couple of dollars to around a hundred dollars.
A saleswoman said the anti-aging cream that Lee mentioned earlier was priced at 89,500 won ($90).
"On average 10 sets of the anti-aging products can be sold a day, and 300 can be sold in a month. Many people come to us because the superb quality (of our cosmetics) is spread by word of mouth."
It is true that word of mouth is the way people in North Korea to get to know a brand. This reporter has never seen any television commercial advertisements during his stationing in Pyongyang.
Likewise, the Pyongyang Cosmetics Factory has never advertised on television. Nonetheless, the saleswoman said they have some advertising videos on the screens hanging over the sales counters, and broadcast advertisements as well.
The factory has a diagnostic room for skin tests for consumers and gives accurate suggestions on skin-care products.
When asked about whether the government would allocate cosmetics, the saleswoman gave a nimble answer.
"This is a store run by the cosmetics factory," she said. "But many people still come to us because we priced our products at a rather low level." 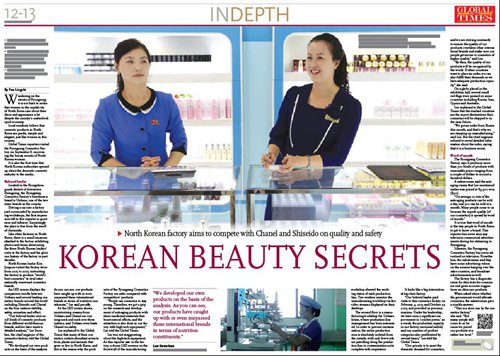