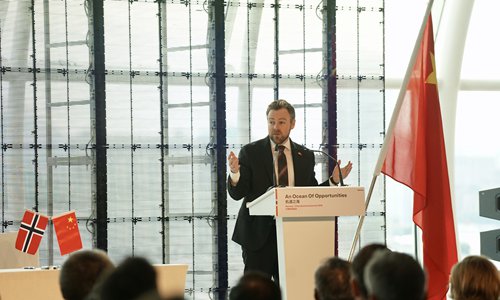 The Norwegian minister of trade and industry called for cooperation with China in protecting the ocean at a business summit in the cruise terminal of Shanghai on Thursday.

A father of two children, Torbjørn Røe Isaksen told attendees, "we're all in the same boat."

He urged people worldwide to join hands to save the ocean and create a sustainable ocean economics for future generations.

"The oceans are vital for life on Earth," he said. "They provide the oxygen, the food. They temper the climate and produce clear energy. The oceans make life on Earth possible."

About 480 billion plastic bottles are produced worldwide annually, and it is predicted that the amount of ocean plastic will surpass that of ocean fish within a decade, according to reports.

King Harald V and Queen Sonja of Norway attended the summit as part of their ongoing state visit to China.

After opening the Norway-China summit, the royal couple attended a press conference.

Asked about China's major achievement since reform and opening-up, Queen Sonja told the Global Times, "That must be to help 700 million people out of poverty. That's one of the main things that you have reached during the 40 years."