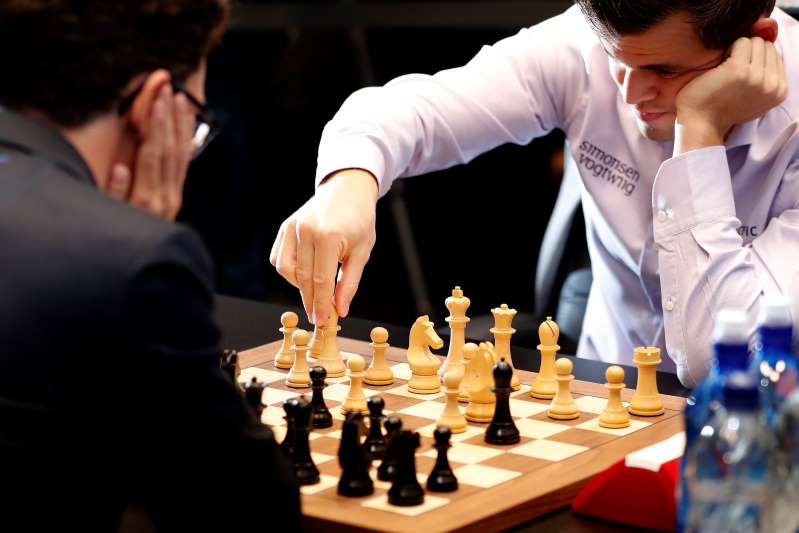 After their three-week match ended in 12 draws, Carlsen wrapped up the victory quickly with three straight wins to build an unassailable lead in the best-of-four rapid format.

"I felt like I had a really good day at work today," the 27-year-old Carlsen said. "Everything kind of went perfectly."

Caruana, 26, was trying to become the first American since Bobby Fischer in 1972 to become the chess world champion but lost a rook-and-pawn endgame in the first game and then had to take big risks in the next two while trying to make up the deficit. Carlsen won the second after sacrificing a piece for an unstoppable attack and then managed to promote a pawn to a second queen in the third for a massive material advantage.

"I was hoping to play my best chess today but I didn't even come close to that," said Caruana, who was born in Miami, raised in Brooklyn and lives in St. Louis. "I felt a lot of pressure but I don't think I had added pressure because I was the first American challenger in a long time. I think the match naturally comes with a lot of pressure."

The tiebreakers were played with 25 minutes for each player per game, while the 12 previous classical-style games lasted up to seven hours each.

It's the third time Carlsen has successfully defended his title after winning it from Viswanathan Anand of India in 2013. By dominating the tiebreakers, the Norwegian justified his decision to offer a draw in the 12th classical game on Monday despite having a superior position — refusing to take the risk of going for a win and staking his title on his ability to outplay Caruana in speed chess.

That draw offer had been harshly criticized by other top grandmasters, including chess legend Garry Kasparov, who called it "shocking." Another former world champion, Vladimir Kramnik, said it was "absurd."

But Carlsen said he had no regrets.

"Based on my chances today it was correct. As for the opinions of Garry and Vlad, they're entitled to their stupid opinions, that's all I can say," Carlsen said. "I understand that that's not the mindset that everybody wants, but that's what I felt gave me the best chance of winning the match."