Not all details in GOP memo help undercut Mueller probe 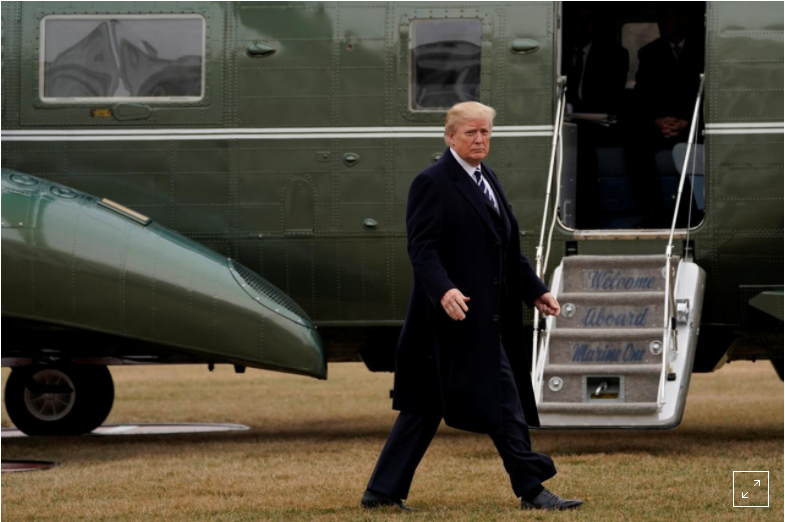 US President Donald Trump walks on South Lawn upon his return to the White House in Washington, U.S., from Greenbrier, WV, February 1, 2018. (Photo: Reuters/Yuri Gripas)

President Donald Trump and his supporters are using a congressional memo alleging FBI surveillance abuse to raise questions about the origins of a federal investigation into his campaign's ties to Russia. But the four-page document includes revelations that might complicate the effort to undermine special counsel Robert Mueller's ongoing probe.

The document contends that the FBI relied excessively on an ex-British spy whose opposition research was funded by Democrats when it applied for a surveillance warrant on a Trump campaign associate. Yet it also says the investigation into potential Trump ties to Russia actually began several months earlier — "triggered," it says, by information involving a separate campaign aide.

The spy who compiled the allegations admitted to having strong anti-Trump sentiments, but he was not a random find for the bureau. Rather, he was a "longtime FBI source" with a credible track record, says the memo from the House intelligence committee's Republican chairman, Rep. Devin Nunes, and his staff.

The warrant authorizing the FBI to monitor the communications of campaign adviser Carter Page? Approved by a judge on four occasions, according to the memo, and signed off on by Trump's hand-picked deputy attorney general, Rod Rosenstein.

Without the underlying materials being made public, the memo only further intensified a partisan battle over how to interpret the actions of the FBI and Justice Department during the early stages of the counterintelligence investigation Mueller later inherited.

"Having decided to cherry-pick, the Nunes team picked a bunch of the wrong cherries for its own narrative," Matthew Waxman, a Columbia University professor and former Bush administration official, wrote in an email.

The memo, released over the objections of the FBI and Justice Department, could well give Trump and Republicans new grounds to challenge the Mueller investigation as politically tainted. Even before its declassification Friday, Trump had been telling confidants he believed the document would validate his concerns that the FBI and Justice Department conspired against him.

The central allegation is that agents and prosecutors, in applying in October 2016 to monitor the communications of campaign adviser Carter Page, concealed from a judge that a former spy whose findings had provided grounds for suspicion had been funded by Hillary Clinton's campaign and the Democratic National Committee.

That omission is important, Republicans say, because a judge should have known that "political actors" were involved in allegations that led the Justice Department to believe Page might be an agent of a foreign power — something he has consistently and strenuously denied.

Research from former spy Christopher Steele, according to the memo, "formed an essential part" of the application to receive the warrant, though It's unclear how much or what information he collected was included in the application, or how much has been corroborated.

Steele's opposition research effort was initially funded by the conservative Washington Free Beacon. It was later picked up by the Clinton campaign and the DNC through a Washington law firm

For one thing, Democrats say, it's misleading to say a judge was not told of the potential political motivations of the people paying for Steele's research.

Beyond that, though, the memo confirms the FBI's counterintelligence investigation into the Trump campaign began in July 2016 — months before the surveillance warrant was even sought — and was "triggered" by information concerning a different campaign aide, George Papadopoulos. Papadopoulos pleaded guilty last year to lying to the FBI and is cooperating with Mueller's investigation.

The timing makes clear that other Trump associates beyond Page, who was part of the election effort for only a short period and was not in the president's inner orbit, had generated law enforcement scrutiny. The memo also omits that Page had been on the FBI's radar just a few years earlier as part of a separate counterintelligence investigation into Russian influence.

Though the memo focuses on Page, intelligence committee Democrats wrote in a response, "this ignores the inconvenient fact that the investigation did not begin with, or arise from Christopher Steele or the dossier, and that the investigation would persist on the basis of wholly independent evidence had Christopher Steele never entered the picture."

Other details in the memo could also challenge Republican claims of bias. The warrant requested in October 2016 was subsequently renewed on three additional occasions, meaning that judges approved it four times. And one of the Justice Department officials who approved it was Rosenstein, a Trump appointee.

Trump, who lambasted the FBI and Justice Department on Twitter, was asked later in the day if he was more likely to fire Rosenstein and if he still had confidence in him. The president simply said, "You figure that one out."

Though the document had been classified, since it deals with warrants obtained from the Foreign Intelligence Surveillance Court, the White House declassified it Friday and sent it to Nunes for immediate release.

The disclosure of the document is extraordinary since it involves details about surveillance of Americans, national security information the government regards as among its most highly classified. Its release is likely to further escalate an intra-government conflict that has divided the White House and Trump's hand-picked law enforcement leaders.

Rosenstein and FBI Director Christopher Wray had personally lobbied against the memo's disclosure, arguing it could set a dangerous precedent.

The memo's release also comes amid an ongoing effort by Trump and congressional Republicans to discredit Mueller's investigation, which focuses not only on whether the Trump campaign coordinated with Russia but also on whether the president sought to obstruct justice.