WORLD Not over yet: New US Syria mission after al-Baghdadi’s death

Not over yet: New US Syria mission after al-Baghdadi’s death 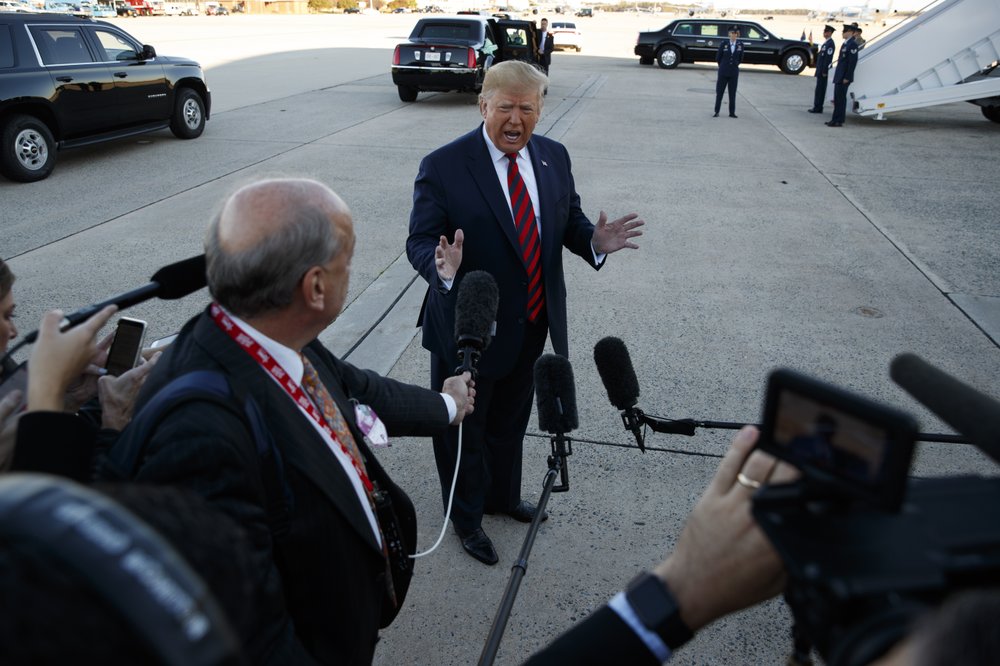 President Donald Trump talks to reporters before boarding Air Force One for a trip to Chicago to attend the International Association of Chiefs of Police Annual Conference and Exposition, Monday, Oct. 28, 2019, in Andrews Air Force Base, Md. (Photo: AP)

Pivoting from the dramatic killing of the Islamic State group’s leader, the Pentagon is increasing US efforts to protect Syria’s oil fields from the extremist group as well as from Syria itself and the country’s Russian allies. It’s a new high-stakes mission even as American troops are withdrawn from other parts of the country.

Defense Secretary Mark Esper says the military’s oil field mission also will ensure income for Syrian Kurds who are counted on by Washington to continue guarding Islamic State prisoners and helping American forces combat remnants of the group — even as President Donald Trump continues to insist all US troops will come home.

“We don’t want to be a policeman in this case,” Trump said Monday, referring to America’s role after Turkey’s incursion in Syria. In the face of Turkey’s early October warning that it would invade and create a “safe zone” on the Syrian side of its border, Trump ordered US forces to step aside, effectively abandoning a Kurdish militia that had partnered with US troops.

Esper and Gen. Mark Milley, chairman of the Joint Chiefs of Staff, spoke at a Pentagon news conference to cheer the successful mission by US special operations forces Saturday that ended with IS leader Abu Bakr al-Baghdadi blowing himself up. Esper called al-Baghdadi’s death a “devastating blow” to an organization that already had lost its hold on a wide swath of territory in Syria and Iraq.

Milley said the US had disposed of al-Baghdadi’s remains “appropriately” and in line with the laws of armed conflict. He also said US forces retrieved unspecified intelligence information from the site, which he described as a place in northwestern Syria where the IS leader had been “staying on a consistent basis.”

A US military dog that was slightly injured in the raid has recovered and is back at work, Milley said.

Esper hinted at uncertainty ahead in Syria, even though the Islamic State has lost its inspirational leader, with the Syrian government exploiting support from Russia and Iran.

A big part of that complexity is the rejiggering of the battlefield since Trump earlier this month ordered a full US troop withdrawal from positions along the Turkish border in northeastern Syria. Even as those troops leave, other US forces are heading to the oil-producing region of eastern Syria, east of the Euphrates River.

Trump recently has proposed hiring an American oil company to begin repairing Syria’s oil infrastructure, which has been devastated by years of war. Repeated US airstrikes against facilities for oil storage, transport, processing and refining starting in 2015 inflicted heavy damage.

Esper said last week that a “mechanized” force would reinforce US positions in the oil region, meaning a force equipped with tanks or Bradley infantry carriers. On Monday he provided no details about the makeup of the force.

He referred to “multiple states and nonstate” forces vying for control of Syrian territory and resources, including the oil. He said that while the main US military mission is to ensure the “enduring defeat” of the Islamic State, that now will include denying oil income for the group.

“The United States will retain control of oil fields in northeast Syria,” Esper said, adding that at the height of al-Baghdadi’s rule, those oil fields provided the bulk of his group’s income.

Esper’s remarks echoed Trump’s focus on the oil. But whose oil is it?

“We’re keeping the oil,” Trump said during a speech to police officers in Chicago. “Remember that, I’ve always said that. Keep the oil. We want to keep the oil — $45 million a month — keep the oil. We’ve secured the oil.”

Esper emphasized that the purpose of securing Syria’s oil region is to deny income to the Islamic State. But a reporter asked whether the mission includes preventing Russian and Syrian government forces from entering that area.

“The short answer is yes, it presently does,” Esper said, “because in that case we want to make sure” the Syrian Kurdish-led militia known as the Syrian Democratic Forces, “does have access to the resources in order to guard the prisons and arm their own troops, in order to assist us with the Defeat-ISIS mission.”

This area has been the scene of unusual confrontations with US forces, such as a one-sided battle in February 2018 in which a pro-Syrian government force reported to be mainly private Russian mercenaries unleashed an artillery barrage near a small US military outpost. As then-Defense Secretary Jim Mattis recounted the episode in congressional testimony two months later, he ordered the attacking force to be “annihilated - and it was” after Russian authorities insisted the attackers were not their troops.

Esper said Monday that he has seen no sign of Syrian or Russian forces challenging US control of the oil fields.

In recent days, however, US officials detected what they considered to be a significant massing of Syrian and Russian forces on the western side of the Euphrates River near Deir el-Zour, a US official said Monday. Russian officials were contacted by phone, and the US was given assurances that the staged forces would not move east, the official said, speaking on condition of anonymity to discuss a sensitive issue.

Jim Jeffrey, the Trump administration’s special envoy for Syria, seemed to refer to this episode when he said last Friday, “We are currently very concerned about certain developments in the south, in the Deir el-Zour area. I’ve talked to my Russian colleague about that and we’re having other contacts with the Russians concerning that situation. We think it is under control now.”

After expelling Islamic State militants from southeastern Syria in 2018, the Kurds seized control of the more profitable oil fields to the south in Deir el-Zour province.

A quiet arrangement has existed between the Kurds and the Syrian government, whereby Damascus buys the surplus through middlemen in a profitable smuggling operation that has continued despite political differences. The Kurdish-led administration sells crude oil to private refiners, who use home-made primitive refineries to process fuel and diesel and sell it back to the Kurdish-led administration.

The oil was always likely to be a bargaining chip by the Kurds to negotiate a deal with the Syrian government, which unsuccessfully tried to reach the oil fields to retake them from IS. With Trump saying he plans to keep forces to secure the oil, it seems the oil will continue to be used for leverage— with Moscow and Damascus.