WORLD Not personal enough: Why climate change has yet to become a top priority

Not personal enough: Why climate change has yet to become a top priority

Spurring ambitious-enough action to stem climate change will require persuading most people that its impacts - from deadlier weather to surging migration - are a direct and imminent threat to themselves, according to a British defense official. 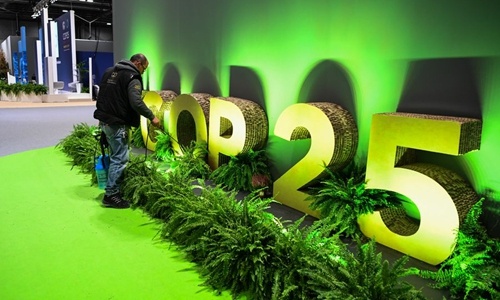 Global warming "is not inconvenient if you're not affected by it at all," said Richard Nugee, head of climate change and sustainability strategy at the Ministry of Defence, during an online event run by London-based think-tank Chatham House this week.

The lack of a sense of personal threat is one reason why "climate change always seems to be No.2" on Britain's list of public concerns, behind other shifting priorities like Brexit - Britain's departure from Europe - and COVID-19, he explained.

"The urgent always overtakes the important. And everything apart from climate change seems to be the urgent," he added. But with the window to cut climate-heating emissions and tame climate risks closing fast, more and more people are likely to be hit soon by anything from worsening floods and storms to economic losses, climate security experts warned. A broad inability to grasp that threat - particularly in many so far less-affected richer nations that generate most of the emissions driving global warming - is a major barrier to climate action, they said.

The coronavirus pandemic has given more people a sense of how quickly a personally painful crisis can emerge, said Mami Mizutori, the UN secretary-general's special representative for disaster risk reduction. What COVID-19 should be making clear is that "prevention saves lives," she added.

Similarly, the pandemic has shown a need to take a broader look at potential risks, including how they may interact, and put strategies in place to deal with them - from flexible financing to clearer communications - before crises arrive.

"COVID[-19] has taught us if you don't have a plan, it's a plan for failure," Mizutori told the online event.

Alice Hill, who led work on climate change threats for the US Department of Homeland Security during former president Barack Obama's administration, said one under-appreciated threat was how far warming could undermine basic planning assumptions.

From infrastructure design to fighting wildfires, producing energy and farming, planetary heating will "affect every system on which humans rely," she warned.