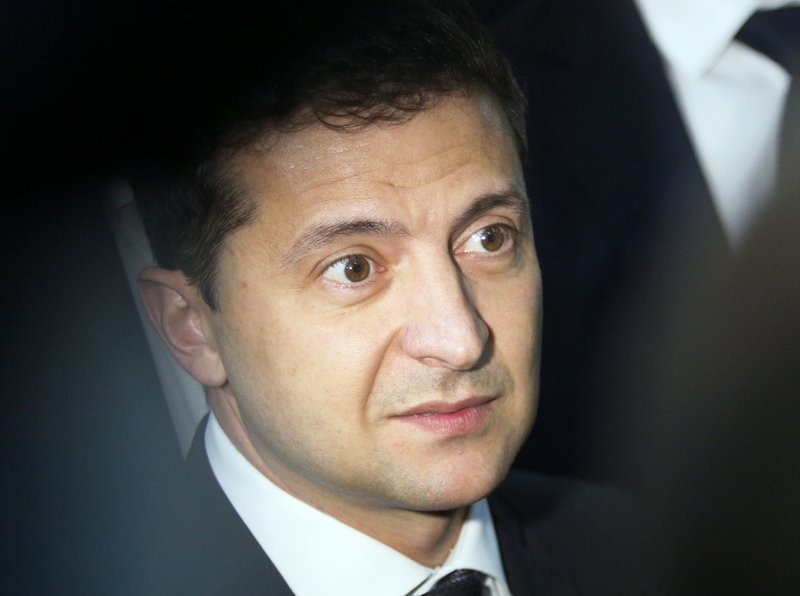 Revelations of how far Zelenskiy’s administration appeared willing to go to please US President Donald Trump are depleting diplomatic capital he needs to end a deadly conflict with Russia , repair the Ukrainian economy and to improve his country’s corrupt reputation.

“Kyiv clearly didn’t win any points from this situation,” Penta Center analyst Volodymyr Fesenko, head of the Ukrainian think tank, said. Ukraine “now has to worry about how not to become a toxic partner that Western leaders turn away from.”

That’s especially important as Zelenskiy prepares for a summit with the leaders of Russia, France and Germany this month to bring peace to eastern Ukraine, where 13,000 people have died in five years of fighting between pro-Moscow separatists and Ukrainian troops.

“Toxic” is a word few Ukrainians would have used a year ago for Zelenskiy, 41, who before he became president was an actor known for a political sitcom, romantic comedies and self-deprecating charm. The political neophyte renewed hope in long-struggling Ukraine and overwhelmingly won an April election.

Zelenskiy has been in a different spotlight since Trump pressured him to investigate the son of former Vice President Joe Biden, a Democratic candidate hoping to challenge Trump next year. A July 25 phone conversation between the two leaders helped trigger a congressional impeachment inquiry.

Zelenskiy has spent the last week denying he caved in to Trump’s request and working to claw back international legitimacy, while also trying to remain in the good graces of the United States.

Ukraine’s chief prosecutor on Friday made what looked like a gesture to satisfy Trump by announcing a review of past cases involving the founder of a gas firm where Biden’s son, Hunter Biden, served on the board.

Zelenskiy’s careful explanation: He was “not involved” in the prosecutor’s decision and any future investigations will be “transparent.” Analysts think the Ukrainian leader is trying to keep his options open.

Ukraine depends on international loans to stay solvent and Russian energy to keep warm as autumn winds blow through Kyiv. The country’s weakness explains in part why Zelenskiy seemed eager to please Trump during the summer phone call

Zelenskiy has said he thought only part of their conversation would be made public. But the damage was done.

No wrongdoing by the Bidens has been found so far. Democrats in Congress have said they think Trump held up military aid to Ukraine to pressure Zelenskiy into digging up dirt on a political rival, which Trump denied.

Zelenskiy had one bright spot this week: a visit from Tom Cruise, who’s considering Kyiv as a film shoot location. The Ukrainian leader showered flattery on the Hollywood star, too.

But what looked like Zelenskiy’s expressed willingness to do Trump’s bidding has provoked criticism at home.

Some Ukrainian politicians voiced concern the president would destroy the good will the country built with both Democrats and Republicans and still needs regardless of who wins the 2020 US presidential election.

“The president’s irresponsible, childish statements throw US bipartisan support into doubt, including both economic and military assistance,” said opposition lawmaker Ivanna Klympush-Tsintsadze, a former Ukrainian government minister who oversaw efforts to integrate with the West.

Zelenskiy remains popular in Ukraine, but some worry attention from the impeachment inquiry could put their head of state on the back foot with Russia, forcing him to cede too much in the upcoming eastern Ukraine peace talks.

The phone call also could come back to haunt Zelenskiy with the summit’s mediators, German Chancellor Angela Merkel and French President Emmanuel Macron.

He suggested Merkel and Macron were softening on the sanctions imposed on Russia over its annexation of Crimea in 2014 and actions in eastern Ukraine.

Zelenskiy later tried to mend matters by saying he was grateful to Merkel and Macron for their help and the conversation with Trump took place during a “difficult period.”

Opposition lawmaker Klympush-Tsintsadze alleged that Russia was responsible for the embarrassment that was “a sad result” of the US-Ukraine scandal.

“It is in Russia’s interests to turn Ukraine into ... a country that does not deserve support, and this in turn creates favorable conditions for lifting sanctions,” she said.

Russia President Vladimir Putin, who also will be at this month’s peace summit, said this week the Kremlin has nothing to do with the call or anything after that led to the inquiry, saying Moscow is only an observer.

Another Ukrainian analyst, Mykhaylo Pashkov of the Razumkov Center public policy think tank, said either way, “There is only one beneficiary from this scandal - Russia.”

“Any crack in relations between Ukraine and the United States is both tactically and strategically extremely beneficial for the Kremlin, which is trying to cut Kyiv off of Washington,” Pashkov said.