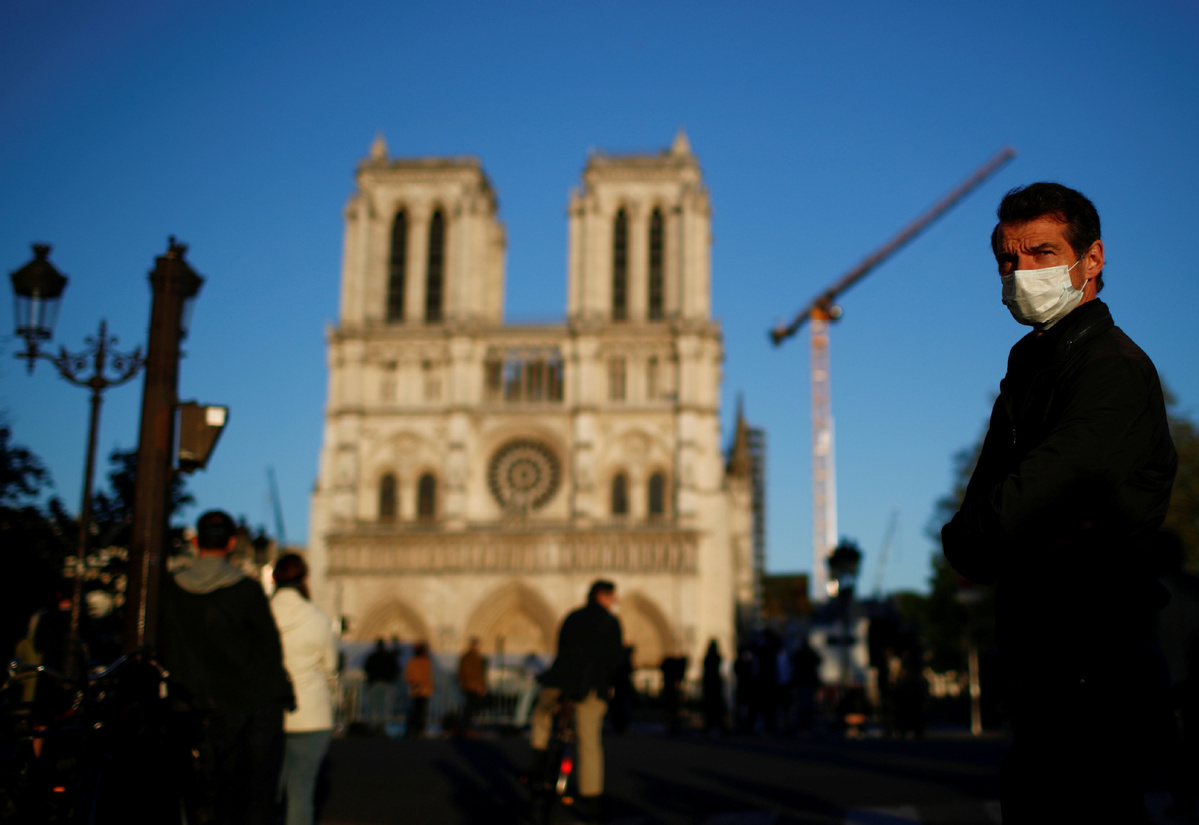 A man wearing a face mask listens to the Notre-Dame de Paris Cathedral's great bell ringing, as a mark of the building's resilience one year after a devastating fire, during the coronavirus disease (COVID-19) outbreak, France, April 15, 2020. (Photo: Agencies)

More than a year after a devastating fire ravaged the Notre Dame cathedral in Paris, its forecourt has reopened after it was cleared of dangerous lead pollution.

Authorities in the city responsible for the conservation and restoration of the building confirmed the site was authorized to reopen after receiving the green light from the regional health agency, known as ARS.

The plaza was closed off shortly after the blaze on April 15 last year that nearly destroyed the 12th-century church. Millions worldwide witnessed the iconic building burning live on television.

Building works to secure Notre Dame were suspended in mid-March due to the novel coronavirus outbreak. French renovation teams still aim to complete the task of finishing a new-look cathedral by 2024, the project leader said on Sunday.

The virus pandemic "has unquestionably delayed the work", said Jean-Louis Georgelin, the army general put in charge of the huge rebuilding program.

Georgelin said the goal remains for it to reopen fully for religious services in April 2024. "There's no reason to believe it cannot be met－we'll have to find a way to catch up," he said.

City officials on Sunday removed the tall metal barriers surrounding the square, offering visitors a closeup look at the gothic monument for the first time in 14 months.

Paris Mayor Anne Hidalgo described the reopening of the forecourt as a form of "renaissance" while on a visit to the area with senior clergy.

"It's almost a form of rebirth today," said Hidalgo. "Notre-Dame is the soul of Paris ... It's a site that doesn't fail to impress you," she said.

French Minister of Culture Franck Riester said the reopening was "a very important moment", adding that it was delayed "because of lead pollution and questions of confinement".

To protect public health, the site will continue to be regularly cleaned, and samples will be taken for monitoring and analysis purposes, Agence France-Presse reported.

The cathedral's facade and arched entrances will remain blocked to visitors as workers prepare to resume the restoration effort after the virus lockdown is lifted.

The fire consumed the cathedral's oak beams and more than 300 metric tons of lead paneling in the roof, emitting toxic lead particles into the air as they melted.

Heavy concentrations of the metal settled on the square and nearby streets that proved particularly difficult to remove, sparking fears that residents could be exposed to poisoning.

Several schools were closed for weeks as workers decontaminated classrooms and playgrounds, and restoration work was halted after authorities demanded face masks and other protective gear for workers.

While the final renovation cost remains uncertain, an appeal for funds has raised close to $1.1 billion.