WORLD Notre Dame fire was a warning bell. But will Europe listen?

Notre Dame fire was a warning bell. But will Europe listen? 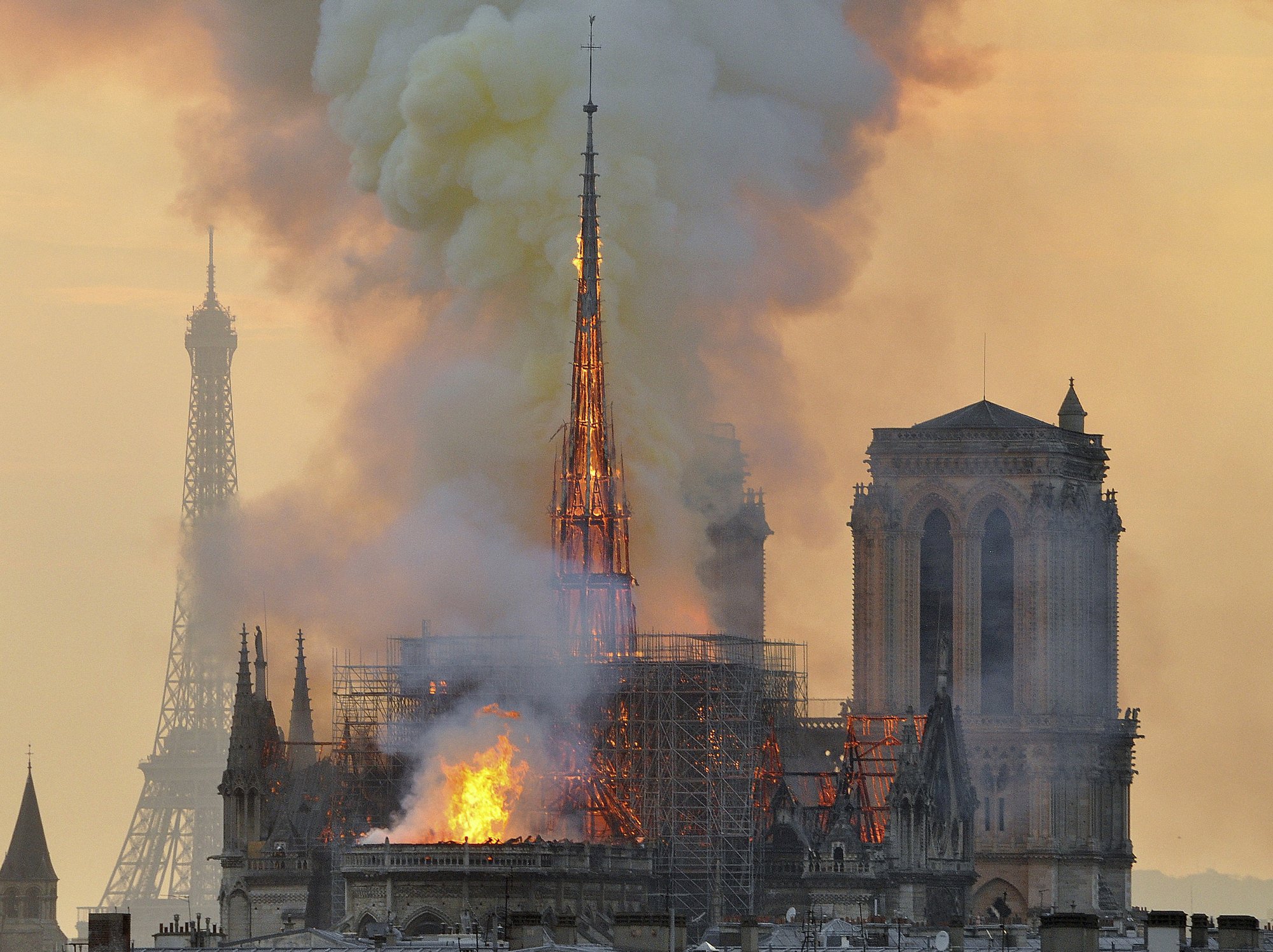 With the Eiffel Tower behind, left, flames and smoke rise from the blaze at Notre Dame Cathedral in Paris that destroyed its spire and its roof but spared its twin medieval bell towers, and prompted a frantic rescue effort to save its most precious artefacts on April 15, 2019. (Photo: AP)

It’s a thin line where the patina of age on Europe’s countless monuments gives way to the onset of neglect. Like with so many loved ones, all is assumed to be fine, until suddenly it’s not.

In the wake of the fire last week that gutted Notre Dame, questions are being raised about the state of thousands of other cathedrals, palaces and village spires that have turned France — as well as Italy, Britain and Spain — into open air museums of Western civilization.

If even an iconic building like Notre Dame could not be protected from devastation, if such a potent symbol of France had to scramble for maintenance funds, that lays bare a culture of apathy that can undermine a shared history as well as the multibillion-dollar tourism industry upon which much of Europe depends.

“We are so used to our outstanding cultural heritage in Europe that we tend to forget that it needs constant care and attention,” Tibor Navracsics, the European Union’s top culture official, told The Associated Press.

Some say the wake-up call, not just for Europe but the whole world, rang in Paris.

Sneska Quaedvlieg-Mihailovicis, head of the Europa Nostra heritage foundation, said it was “as if Notre Dame decided to set itself on fire to ring the alarm bell. As if she wanted to sacrifice herself for the cause.”

Devastating fires have robbed mankind of its knowledge, art and treasures since the famed library of Alexandria in northern Egypt burned down in ancient times. Prior to Notre Dame, the last global warning came when Brazil’s Museu Nacional in Rio de Janeiro, one of the most important cultural institutions in South America, burned down in September.

“Unfortunately, the fire in Notre Dame is just one of many examples,” said Navracsics.

Experts look at the near-endless list of fires at historical sites in Europe and wonder why officials so often don’t learn before it’s too late. Data on such fires is limited, because monuments are so varied. Some were accidents, others arson.

“There are no exact statistics,” said Didier Rykner of France’s La Tribune de l’Art, but added that France sees “several fires every year in historic buildings, which is already way too much.”

A 2015 study by the German engineering giant Siemens showed that Scotland had about 10 damaging fires a year, while England lost at least a dozen listed buildings a year. Germany has seen 70 such buildings destroyed since 2000.

“Every year, there’s lightning or something else that destroys a tower or a roof,” Juan Antonio Herráez, who is in charge of preventive conservation at Spain’s Cultural Heritage institute, told the AP.

In 1985, the tower of Luxembourg’s main cathedral caught fire and burned down. In 2004, a fire in the Duchess Anna Amalia library in Weimar, Germany, caused an estimated 80 million euros ($90 million) in damage. In Italy, the historic La Fenice opera house in Venice was destroyed by fire in 1996, and a year later, that happened at Turin’s Sindone Chapel of the Holy Shroud.

And all too often, fires happen during restoration work.

The Glasgow School of Art’s Mackintosh Building was gutted by fire last year for the second time in four years as it neared the end of a multimillion-pound (dollar) restoration project.

In Spain, the Gran Teatre del Liceu — Barcelona’s opera house — was destroyed almost entirely in 1994 by a fire caused by spark that fell on a curtain during routine repair work.

Experts say what’s lacking is the constant attention and regular maintenance that could help avoid the need for major restoration work, but that costs money. The problem has been exacerbated by the austerity budgets many European nations adopted after the 2008 financial crisis and during Europe’s subsequent debt crisis.

After austerity cuts, Rykner said, “you need some drastic restorations that either you don’t do, or you do them badly or cheaply. And it can lead to fires.”

Herráez wants officials to shift their focus to prevention instead of only reacting to building disasters.

“Reparation or restoration should be seen as the failure in conservation,” he said. “We would be spending money in maintenance but we will be minimizing potential future damages.”

“We should never forget that there’s also a cost to non-action, a lack of maintenance or a lack of prevention,” he said.

The problem is that prevention is practically invisible but grand restorations can be a boon for the politicians cutting the ribbons.

The fire at Notre Dame had barely been doused when two of France’s richest men, rival billionaires, stepped up with flashy, competing donations of hundreds of millions of euros to rebuild the Paris cathedral. Notre Dame donations now stand at over 1 billion euros ($1.12 billion) — or about three years of France’s national restoration budget.

This massive outpouring of donations grates on those who have begged for years for a few thousand euros to restore a local but valuable monument.

“You have seen that, now, the money is not the problem,” said Quaedvlieg-Mihailovicis. “There is a lesson. Could we not invest smaller amounts, and not just for the biggest and the most iconic monuments?”

The EU itself has allotted 4.7 billion euros ($5.28 billion) for restorations in the 2014-2020 financial budget on top of what individual nations do.

As state funding dries up, governments are increasingly looking for private donors to renovate major monuments. In Italy in recent years, Tod’s luxury shoes sponsored the Colosseum face-lift, while the Fendi fashion house helped the Trevi Fountain in Rome and Diesel backed improvements for the Rialto bridge in Venice.

“We do need to invest more, but this is a shared responsibility for governments, businesses and citizens across Europe,” said Navracsics.

Nations will reap the benefits of such spending for years to come. Tourism in Britain and France alone amounts to about 7% of their Gross Domestic Product, good for around 150 billion euros and 170 billion euros (around $170 billion and $190 billion) a year.

Some say world-renowned monuments like Notre Dame are the driving force behind such tourism and deserve more respect.

“Cultural heritage is a gold mine. You cannot exploit it and then just leave the mine and go to another one. It is something you really have to cherish,” said Quaedvlieg-Mihailovicis.