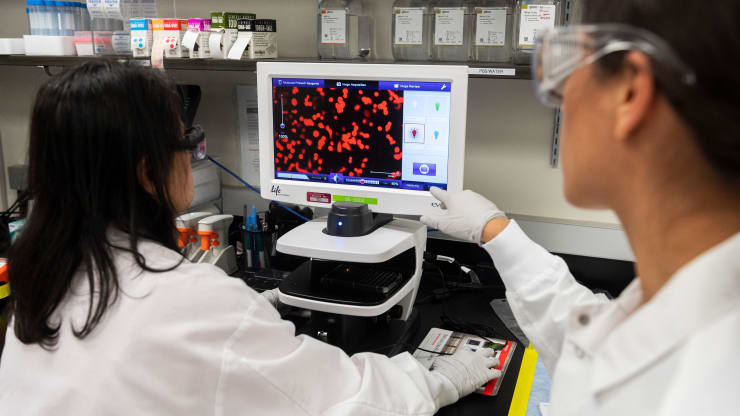 Dr Sonia Macieiewski (R) and Dr Nita Patel, Director of Antibody discovery and Vaccine development, look at a sample of a respiratory virus at Novavax labs in Rockville, Maryland on March 20, 2020, one of the labs developing a vaccine for the coronavirus, COVID-19. (Photo: AFP)

The company said its vaccine candidate, NVX-CoV2373, produced higher levels of the antibodies in healthy volunteers after two doses than those found in recovered COVID-19 patients, raising hopes for its eventual success.

It is reported that the phase one stage of its placebo-controlled trial involved 131 healthy adults aged 18-59 and two dose groups of five and 25 micrograms.

Novavax sated the vaccine was well tolerated with no serious adverse events reported. Side effects included soreness at the site of injection, headache, fatigue and muscle pain. These were classified as mild to moderate, and none were severe.

After the first dose, all subjects who got the vaccine developed antibodies that block SARS-CoV-2's "spike protein," which it uses to latch on to human cells. Meanwhile, most also developed "neutralizing antibodies," which are more potent and prevent viruses from infecting cells.

After a second dose given 28 days later, all participants had the more powerful neutralizing antibodies.

Novavax has not yet shared the detailed findings but said it was submitting the research for publication in a peer-reviewed journal and to medical preprint site medrxiv.org.

The company said it could start a large pivotal Phase III trial as soon as late September, and on a conference call added that it could produce one billion to two billion doses of the vaccine in 2021.

Novavax is among several companies across the globe racing to develop a vaccine to quash the pandemic, which has infected more than 18 million people worldwide, killing at least 694,715 as of Tuesday, according to data by Johns Hopkins University.

There are more than 150 vaccines under development globally, according to the World Health Organization (WHO), with at least 25 already in human trials.