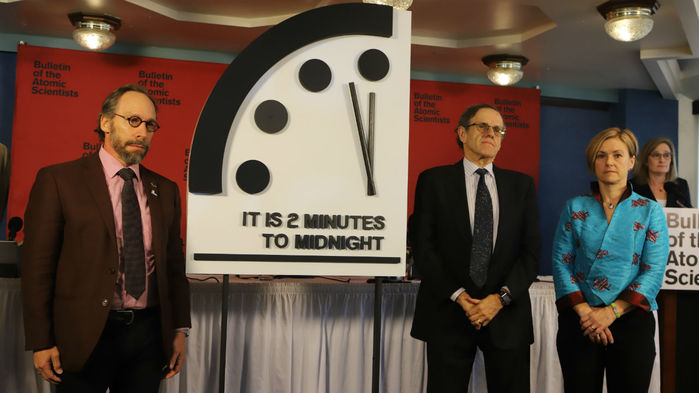 Mounting concerns about the possibility of a nuclear war, along with US President Donald Trump's "unpredictability" have pushed the symbolic "Doomsday Clock" to two minutes before midnight, the Bulletin of Atomic Scientists said Thursday.

The clock -- which serves as a metaphor for how close humanity is to destroying the planet -- was moved forward by 30 seconds, to as near as it has ever been to the hour of the apocalypse.

"In 2017, world leaders failed to respond effectively to the looming threats of nuclear war and climate change, making the world security situation more dangerous than it was a year ago -- and as dangerous as it has been since World War II," said a statement by the group of intellectuals across the fields of international affairs, science, environment and security.

The last time the clock was at two minutes to midnight was in 1953 when the United States and Soviet Union were testing hydrogen bombs.

She described 2017 as "perilous and chaotic," a year in which "we saw reckless language in the nuclear realm heat up already dangerous situations."

She mentioned the series of tests by North Korea, an enhanced commitment to nuclear weapons in China, Pakistan and India, and "unpredictability" embodied by the US president in tweets and statements.

The Doomsday Clock was created in 1947. Its time has changed 20 times since then, ranging from two minutes to midnight in 1953 to 17 minutes before midnight in 1991.

Last year it moved from three minutes before midnight to two-and-a-half minutes.

Meanwhile, "hyperbolic rhetoric and provocative actions by both" the United States and North Korea "have increased the possibility of nuclear war."

Robert Rosner, professor in the Department of Astronomy and Astrophysics and Physics at the University of Chicago, singled out the Trump administration for its "inconsistency," which he said worsens nuclear risks and "constitutes a major challenge for deterrence… and global stability."

"Our allies and adversaries alike are being forced to negotiate a thicket of conflicting policy statements from a US administration weakened in its cadre of foreign policy professionals and unable to develop, coordinate and clearly communicate a coherent foreign much less nuclear policy," Rossner told a press briefing.

He added that the US administration -- which is set to unveil its nuclear policy next week -- "appears likely to increase the types and roles of nuclear weapons in US defense plans and to lower the threshold for nuclear use."

The nuclear ramp-up is not limited to the United States and North Korea.

"We are seeing that all the major weapons states are investing in nuclear arsenals," and these arsenals are "being updated and imbued with enhanced capabilities, said Rossner.

Strained US-Russian relations are also a threat, said Sharon Squassoni, professor of practice at the Institute for International Science and Technology Policy at The George Washington University.

"For the first time in many years, in fact, no US Russian nuclear arms control negotiation are under way," she said.

"Instead we could see a return to a nuclear arms race."

She also singled out Russia for engaging "in provocative and illegal behaviors thought to be part of Cold War history, whether these are egregious violations of state sovereignty in Ukraine, or aggressive military maneuvers on the borders of NATO that could precipitate crises."

Nuclear concerns were not the sole reason for the clock's move toward midnight. Climate change was a leading factor, too.

Since then, carbon dioxide has increased sixfold, and the environment has warmed about one degree Centigrade.

Last year saw extreme heat across the globe, "cataclysmic damage" from hurricanes in the Caribbean, and devastating wildfires, he said.

"And the Arctic ice cap, which we rely on to reflect sunlight and keep the Earth's temperature stable, reached its smallest ever winter maximum."

A global "abuse of information," fueled by reliance on the Internet, is also making solutions harder to reach, said Lawrence Krauss, professor in the School of Earth and Space Exploration and Physics at Arizona State University.

"There has been a loss of trust in political institutions, in the media, in science, and in facts themselves," he said.

"All of which exacerbate the difficulty of dealing with the real problems the world faces."