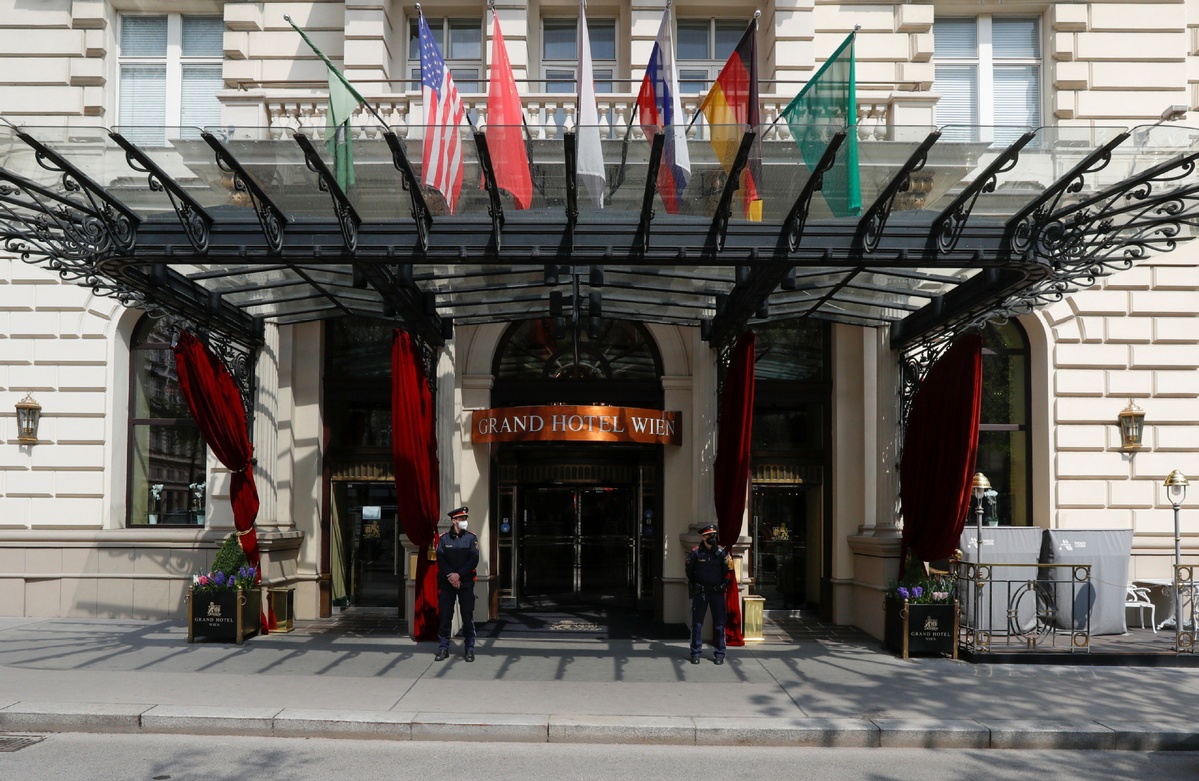 Police stand outside a hotel where a meeting of the Joint Commission of the Joint Comprehensive Plan of Action (JCPOA), or Iran nuclear deal, is held in Vienna, Austria, April 20, 2021. (Photo: Agencies)

A restored nuclear deal between Iran and world powers would not undermine agreements seeking to normalize Israel's ties with Arab nations, analysts said.

High-ranking representatives from China, the United States, the United Kingdom, France, Germany, and Russia－parties to the Joint Comprehensive Plan of Action, commonly known as the Iran nuclear deal established in 2015－are looking to a sixth round of negotiations for a breakthrough in Vienna. They are pinning their hopes on Iran's reentry to the deal with full compliance and the lifting of US sanctions on Iran.

The US ditched the agreement in 2018 and reimposed the sanctions on the Islamic republic.

"Rejoining the US to JCPOA does not destroy the Abraham Accords," said Masoud Mousavi Shafaee, associate professor at the Department of International Relations at Tarbiat Modares University in Teheran.

The core diplomatic goal of the US-brokered Abraham Accords－signed between Israel and the United Arab Emirates, Bahrain, Sudan and Morocco in a series of deals beginning in August last year－is to confer legitimacy on Israel in the region.

Since a restored nuclear deal also implies less enmity between Iran and the US－a direct corollary of the US' desire to curb tensions in the region－this will also cause conflicts to lessen between Iran and other Middle Eastern countries, including Israel, according to Asif Shuja, senior research fellow at the Middle East Institute at the National University of Singapore.

"A restored nuclear deal is unlikely to undo the major gains of the Abraham Accords," Shuja said.

"The normalization of the important Arab countries... is likely to be immune from the subsequent events as the legitimacy, once imparted through this accord, cannot be easily retracted."

Doubts have surrounded the accords after fighting last month broke out between Israel and Palestine; the two sides have agreed to an Egyptian-brokered cease-fire.

"The accords become less anti-Iranian in a way that we can consider it as a diplomatic framework for balancing relations among Israel, Arabs, Iran by the US as a balancer,"Shafaee said.

Despite Israeli Prime Minister Benjamin Netanyahu's efforts to discourage the US from reentering the JCPOA, Shafaee is confident the US and Iran "will reach a deal soon".

But with news of Netanyahu's possible ouster, Shuja said Israel's would-be coalition government may likely have a less hawkish view on its adversaries, and be more amenable to US President Joe Biden's efforts to solve the nuclear problem through diplomatic means.

In May, Chinese envoy to the United Nations Wang Qun urged all parties to the nuclear deal to show political decisiveness in the negotiations.

The talks came under threat until the International Atomic Energy Agency announced that a temporary arrangement reached with Iran in February, allowing the agency to monitor Iran's nuclear activities, had been extended to June 24.