The number of people forcibly displaced due to wars, other violence, and persecution worldwide reached a new high in 2017 to 68.5 million, 2.9 million more than the year before, the UN refugee agency, UNHCR, said Tuesday. 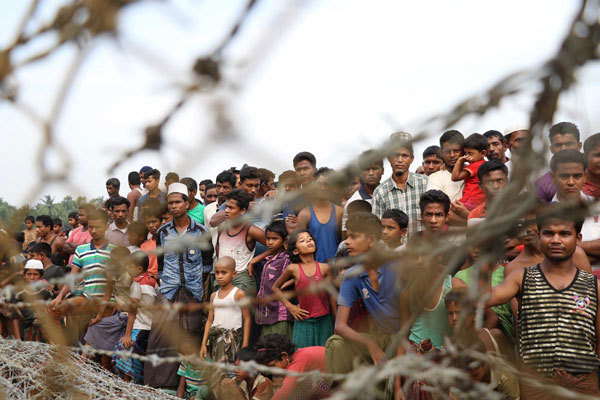 Rohingya refugees from Myanmar in Bangladesh (File photo: China Plus)

It was the fifth straight year of increase and was also the biggest increase UNHCR has seen in a single year.

The displacement was led by the crisis in Democratic Republic of the Congo, South Sudan's war, and the flight into Bangladesh from Myanmar of hundreds of thousands of Rohingya refugees.

Overwhelmingly it is developing countries that are most affected, said UNHCR, asserting that a new global deal on refugees is critical when it released an annual report.

The report was released on the eve of World Refugee Day, which falls on June 20, to commemorate the strength of refugees and to remind governments to work together for them.

This year also marks a key moment for the public to show support for families forced to flee, said UNHCR.

In its annual Global Trends report, UNHCR said 68.5 million people were displaced as of the end of 2017.

Refugees who have fled their countries to escape conflict and persecution accounted for 25.4 million of the total.

There were 16.2 million people displaced during 2017 itself, either for the first time or repeatedly -- indicating a huge number of people on the move and equivalent to 44,500 people displaced each day.

"In short, the world had almost as many forcibly displaced people in 2017 as the population of Thailand. Across all countries, one in every 110 persons is someone displaced," said the report.

"We are at a watershed, where success in managing forced displacement globally requires a new and far more comprehensive approach so that countries and communities aren't left dealing with this alone," said UN High Commissioner for Refugees Filippo Grandi.

"But there is reason for some hope. Fourteen countries are already pioneering a new blueprint for responding to refugee situations and in a matter of months a new Global Compact on Refugees will be ready for adoption by the United Nations General Assembly," he said.