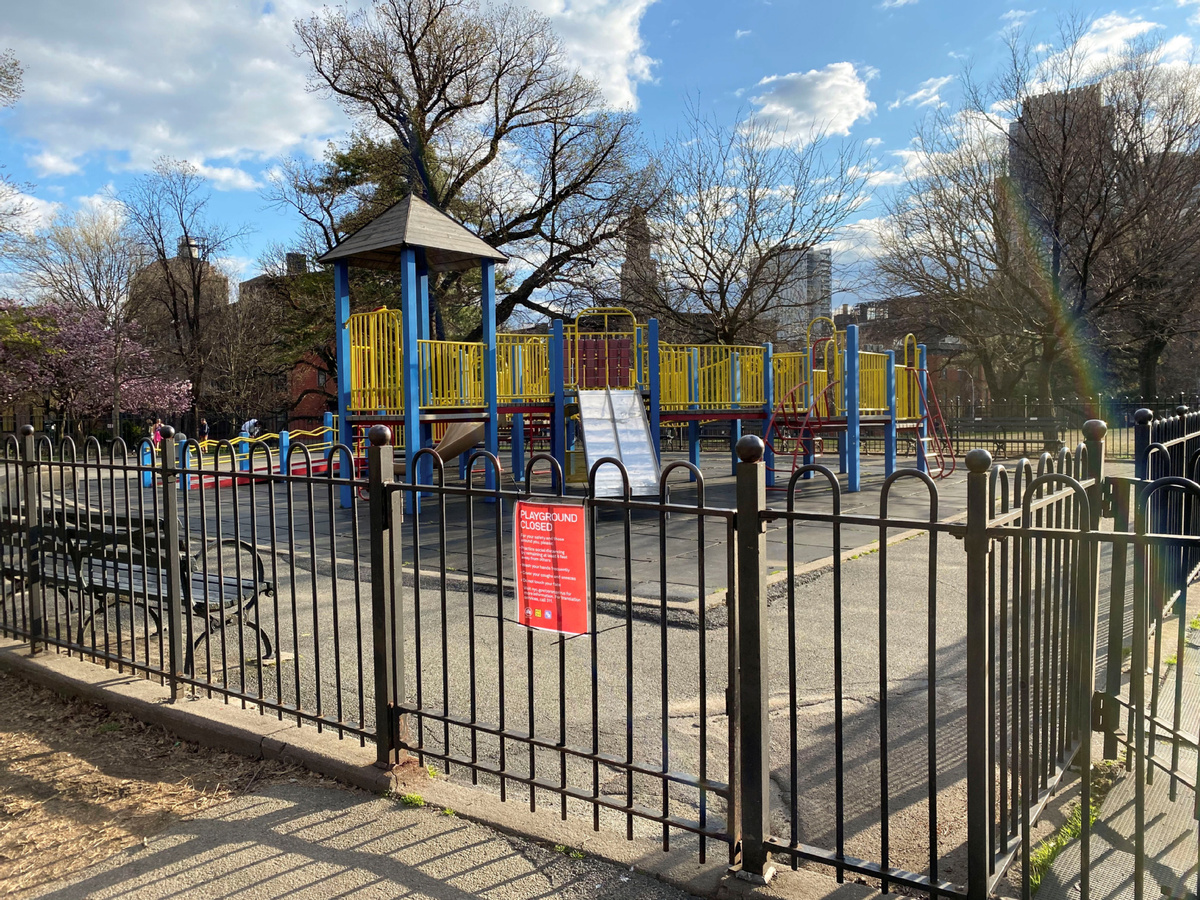 A closed playground is seen in Brooklyn's Fort Greene Park as New York State Governor Andrew Cuomo ordered the closure of all playgrounds, swing sets, basketball courts and similar spaces in New York City as part of the effort to slow the spread of the coronavirus disease (COVID-19), in New York, US, April 1, 2020. [Photo/Agencies]

New York Governor Andrew Cuomo said Monday that deaths and hospitalizations in the state from the coronavirus showed signs of "plateauing" as the death toll in the United States topped 10,000.

In London, British Prime Minister Boris Johnson, 55, who is infected with COVID-19, was moved to an intensive care unit Monday after his condition worsened, his office said.

Trump said he had asked two companies that have dealt with treating "Ebola, AIDS, others" to contact the UK. He also offered his "best wishes to a very good friend of mine, and a friend to our nation," adding that "Americans are all praying for his recovery."

In Japan, where new cases of the virus are rapidly increasing in Tokyo and other cities, Prime Minister Shinzo Abe said Monday that he would declare a state of emergency in seven prefectures that include the country’s largest population centers. Abe also announced an economic stimulus package worth nearly $1 trillion.

The death toll in the US on Monday was 10,783, according to data from Johns Hopkins University, and the number of confirmed cases was above 366,000, more than double that of any other country.

Globally, more than 1.3 million people have been infected by the novel coronavirus as of Monday, according to the university, and at least 74,000 people have died.

But New York, the nation’s coronavirus epicenter, might be seeing a "flattening of the curve", Cuomo said. The state reported 599 new deaths, close to Sunday’s death count of 594 and down from 630 on Saturday.

Cuomo said that the data suggested that the spread of the virus in New York could be plateauing, but emphasized that the state was still facing an emergency.

Across the country in Washington state — where the first death in the US from coronavirus occurred — Governor Jay Inslee announced Sunday that the state will return more than 400 of the 500 ventilators it recently received from the federal government so they can go to New York and other states harder hit by the coronavirus crisis.

But he said it was "unacceptable" that some residents of New York City are still ignoring distancing directives, and he doubled the maximum fine for violating social distancing rules to $1,000.

"Now is not the time to be playing Frisbee in the park with your friends," he said.

Former vice-president Joe Biden spoke with the president on Monday afternoon about the US response to the coronavirus pandemic.

Biden’s deputy campaign manager, Kate Bedingfield, said in a statement that the two "had a good call".

Trump confirmed at Monday’s coronavirus task force news briefing that he had spoken with Biden for "probably 15 minutes" and that the two had "a really wonderful, warm conversation".

"He gave me his point of view, and I fully understood that," Trump said. "And we just had a very friendly conversation."