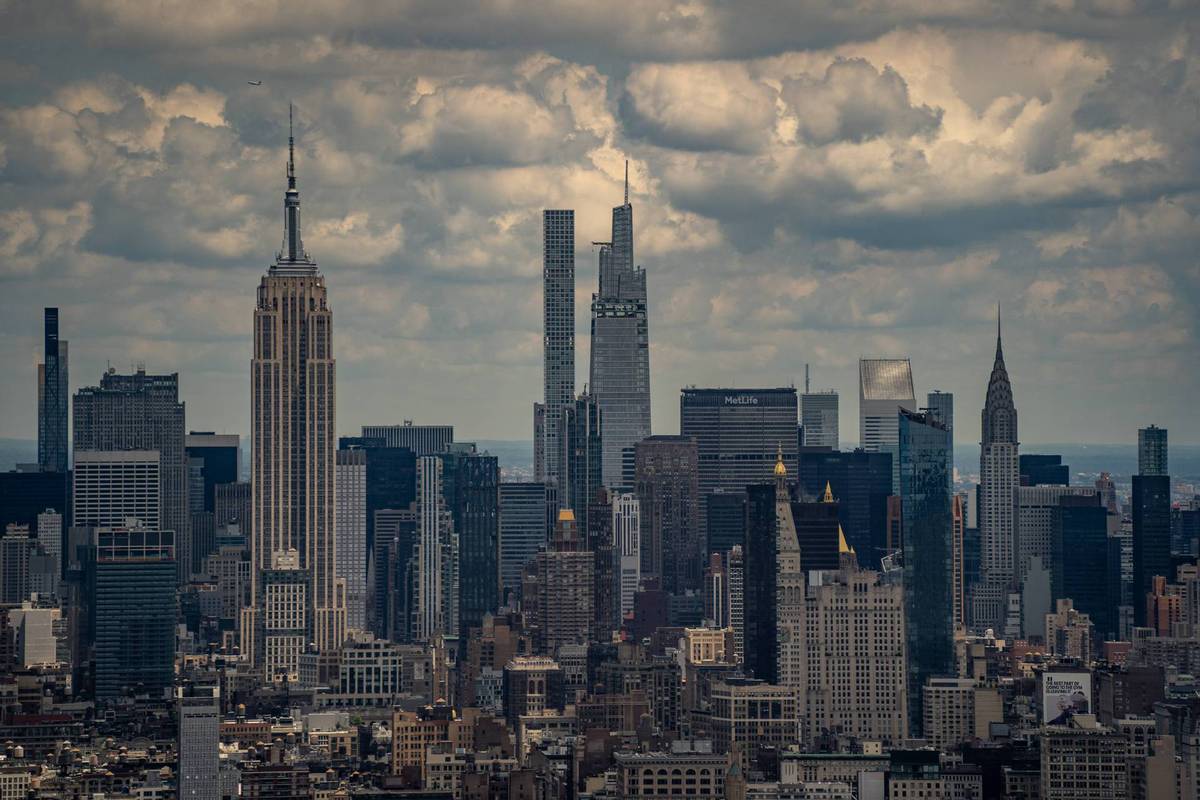 A view from the 64th floor as New York Gov. Andrew Cuomo speaks during a press conference at One World Trade Center on June 15, 2021 in New York City. (Photo: Agencies)

Gov. Andrew Cuomo said Tuesday that 70% of adults in New York have received at least one dose of a coronavirus vaccine, a threshold he said the state would celebrate by easing many of its remaining social distancing rules and shooting off fireworks.

“What does 70% mean? It means that we can now return to life as we know it,” Cuomo told an invitation-only crowd at the World Trade Center in Manhattan.

Effective immediately, he said, the state is lifting rules that required many types of businesses to follow cleaning protocols or take people's temperatures or screen them for recent COVID-19 symptoms.

Businesses will no longer have to follow social distancing rules, or limit how many people they can allow inside based on keeping people 6 feet (2 meters) apart. New York had previously allowed businesses to stop enforcing social distancing and mask rules for vaccinated patrons.

Some rules will remain: New Yorkers, for now, will continue to have to wear masks in schools, subways, large venues, homeless shelters, hospitals, nursing homes, jails and prisons.

Cuomo, a Democrat, said there would be fireworks displays around the state Tuesday. He said in previous days that the fireworks would commemorate the 70% threshold, but said Tuesday the fireworks are to honor essential workers.

New York has, essentially, been at that mark for days. It reached 69.5% of adults vaccinated Saturday, and 69.9% on Monday.

But Cuomo said New York would remember Tuesday, June 15 — also the birthdate of his late father, the former Gov. Mario Cuomo — as the date when New York “rose again.” It's unclear how many more people have to get vaccinated to reach herd immunity, which is when enough people have immunity that the virus has trouble spreading.

It's unclear what that threshold is for the coronavirus, though many experts say it’s 70% or higher. Just half of all 20 million residents, of all ages, in New York are fully vaccinated, according to federal data.

Dr. Anna Bershteyn, professor of population health at New York University Grossman School said the rise of more contagious variants means that as many as 85% of a population will need to be vaccinated for herd immunity.

Still, Dr. Anthony Fauci said in a June 4 interview the nation's priority should be vaccinating as many people as possible “rather than trying to contort ourselves to figure out what that number is."

“It’s the unvaccinated people sharing air in a stuffy space that really is the dangerous situation where a superspreading event can easily happen,” Bershteyn said.

Since Jan. 1 alone, about 1.1 million people have tested positive for the coronavirus in New York, according to state data, but new infections have plummeted this spring.

Over the past seven days, New York has been averaging around 455 new coronavirus cases a day, the lowest recorded level since the pandemic began. Fewer than 620 people were hospitalized statewide, the lowest level since late August.

The pace of vaccinations has also slowed substantially. New York administered nearly 582,000 doses over the past seven days, down from a onetime average of 1 million doses each week.

Professor Bershteyn urged New York officials to focus on communities with the lowest levels of vaccinations, which includes rural counties and parts of New York City.

Only about 30% of the population is vaccinated in Allegany County, a rural area in western New York.

Also Tuesday, health officials announced that nearly 900 people received expired COVID-19 vaccine doses at a vaccination site in Times Square earlier this month. The 899 people who received doses of the Pfizer vaccine at the former NFL Experience building in Times Square between June 5 and June 10 should schedule another Pfizer shot as soon as possible, the New York City Health Department said.