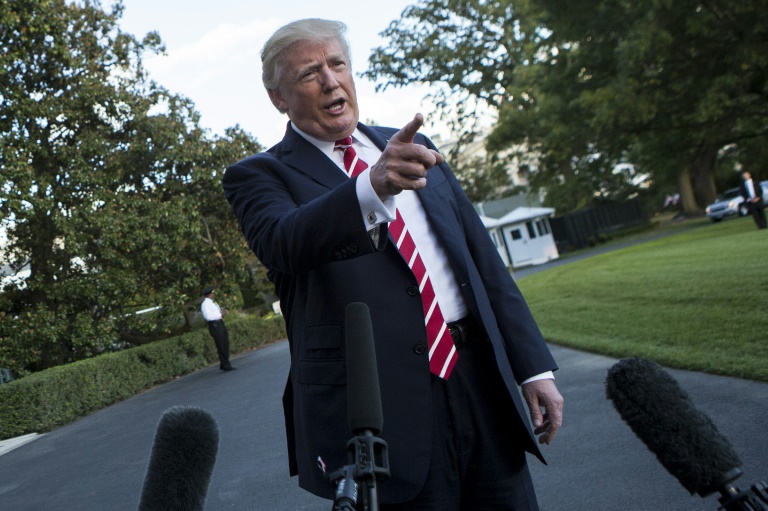 The publisher of the New York Times said Sunday he warned Donald Trump in a White House meeting that the president's escalating attacks on the news media are "dangerous and harmful to our country" and "will lead to violence."

But the meeting with A.G. Sulzberger, publisher of the prestigious newspaper since Jan. 1, appeared to do little to improve Trump's tense and testy relationship with the press.

On Twitter, the president blasted what he called the "anti-Trump haters in the dying newspaper industry," calling them "very unpatriotic!"

The president's meeting with Sulzberger took place July 20, following a request from the White House for what appeared to be a routine get-to-know-you session.

The meeting, which also included Times editorial page editor James Bennet, had remained secret at the White House's request, according to Sulzberger, until Trump tweeted about it early Sunday.

"Had a very good and interesting meeting at the White House with A.G. Sulzberger," Trump said.

"Spent much time talking about the vast amounts of Fake News being put out by the media & how that Fake News has morphed into phrase, 'Enemy of the People.' Sad!"

Sulzberger, in a statement released hours later by the Times, said the president's tweet effectively "put the meeting on the record," and he described what appeared to be an unusually blunt session with the president.

"I told the president directly that I thought that his language was not just divisive but increasingly dangerous," Sulzberger said.

"I told him that although the phrase 'fake news' is untrue and harmful, I am far more concerned about his labeling journalists 'the enemy of the people.' I warned that this inflammatory language is contributing to a rise in threats against journalists and will lead to violence."

With some foreign leaders using Trump's language "to justify sweeping crackdowns on journalists, I warned that it was putting lives at risk."

Sulzberger concluded: "I implored him to reconsider his broader attacks on journalism, which I believe are dangerous and harmful to our country."

Beyond confirming that the meeting took place, the White House has provided no details. But Trump issued a string of four tweets a few hours after reports of the meeting emerged.

"When the media - driven insane by their Trump Derangement Syndrome - reveals internal deliberations of our government, it truly puts the lives of many, not just journalists, at risk! Very unpatriotic!" Trump tweeted.

He added that "the failing New York Times and the Amazon Washington Post do nothing but write bad stories even on very positive achievements."

The Post, which like the Times is a regular target of Trump's complaints, is owned by Amazon founder Jeff Bezos.

When 37-year-old Sulzberger took over leadership of the Times from his father after several years as a reporter and editor, Trump tweeted that the young man's rise gave the paper a "last chance" to prove itself impartial and to report the news "without fear or FAVOR."

But since then, as the Times and other news sources have chronicled Trump's personal and political problems and logged his frequent misstatements, the president has repeatedly lashed back.

He has tweeted scores of times that the Times is "very dishonest," "failing and corrupt," and that it uses "phony and nonexistent sources."

The Times has defended its reporters' work and noted that, far from "failing," it has enjoyed healthy growth, with 2017 revenue of $1.7 billion, up eight percent from the previous year.

Observers say the president has a love/hate relationship with what was his hometown newspaper as he became one of New York's best-known figures, craving coverage but furious when it appeared critical of him.

The exchange comes at a time of high tension between Trump and the news media, with the president regularly denouncing critical news reports as "fake news."

Trump's latest raft of tweets raised doubts that the meeting with Sulzberger had done much to ease those tensions.

As one former Times editor said on social media about the chances of any reconciliation, "don't hold your breath."

If anything, Trump's relations with the press seem recently to have hit a new low.

The White House barred CNN reporter Kaitlan Collins from a press event Wednesday after her persistent questioning at an earlier occasion was deemed "inappropriate."

Olivier Knox, president of the White House Correspondents Association, deplored the action as a "wrong-headed" response to a reporter who, he said, was simply doing her job.

And Sulzberger's warning of violence came only weeks after the June 28 shooting at a newspaper office in Annapolis, Maryland, in which an aggrieved local man shot and killed five of the paper's employees.