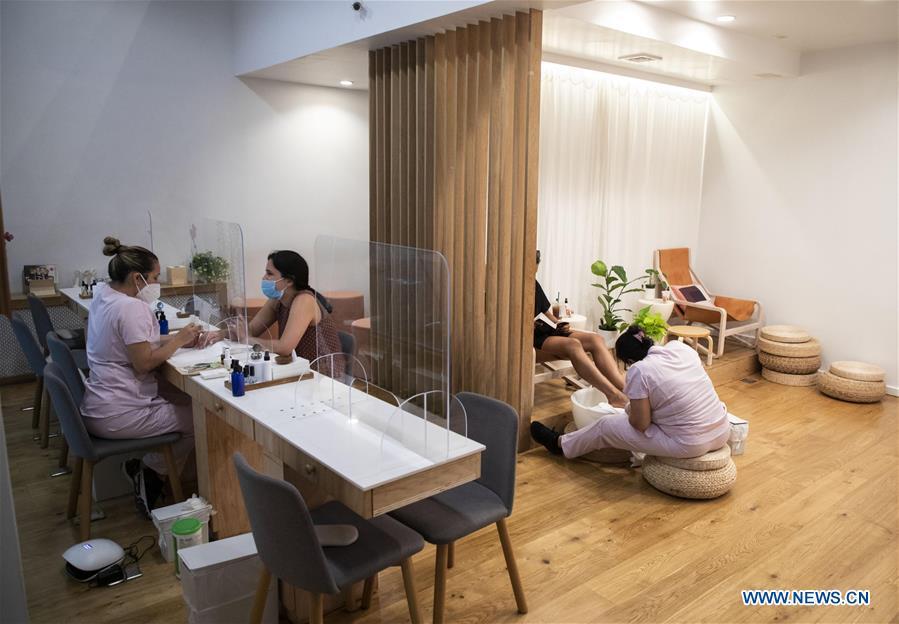 New York City, once the epicenter of the COVID-19 crisis in the United States, entered phase three of reopening on Monday without resuming indoor dining.

Personal care services, such as nail salons and massage parlors, are allowed to reopen after nearly four months of closure.

The salon has also installed wooden boards to keep people apart from each other. All bookings and payments are completed online to reduce direct personal contact as much as possible.

Indoor dining, which was supposed to resume in the phase three reopening in accordance with New York state's plan, was postponed indefinitely in New York City as many other states have seen a surge in COVID-19 cases related to restaurants and bars.

The city has launched an outdoor dining initiative to boost the business of restaurants. Over 20 Open Streets now have Open Restaurants on them, providing dining services on every Friday and weekend throughout the summer.

"Mass transit usage is going up substantially faster than car traffic, and that's in many ways a good thing and a good sign that people are feeling more and more comfortable and ready to engage," said the mayor.

But he still warned people to keep wearing face coverings and socially distancing. "Remembering how important it is to each other, to your family, to yourself, to stay safe," he said.

New York Governor Andrew Cuomo said at his briefing on Monday that casinos and movie theaters statewide will remain closed as the state government continues to review the facts to ensure their safe reopening.

He also said the New York State Department of Health, in consultation with other groups, is finalizing guidance on the possible reopening of schools in September.

Earlier this week, the New York city mayor confirmed that the city's public schools would be open in the fall with safety precautions.

A New York City Department of Education survey released last Thursday found that 75 percent of NYC parents wanted their children to return to school in September.

Schools will have deep cleaning daily, and face coverings and social distancing will be mandated. Handwashing stations and hand sanitizer will be seen all over school buildings, said the mayor.