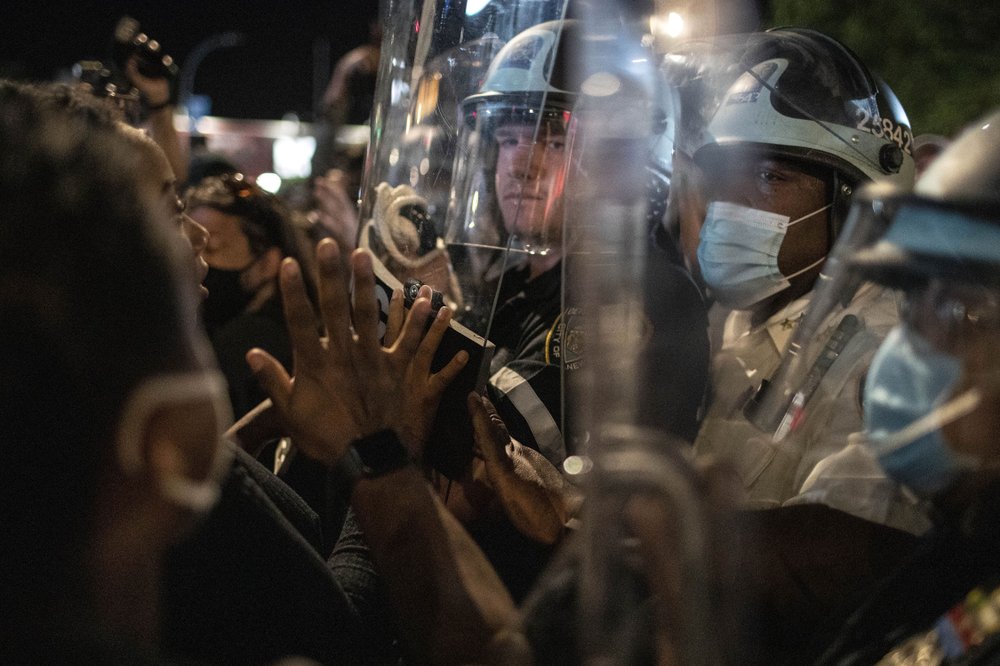 Police hold off protesters during a solidarity rally for George Floyd, May 31, 2020.  (Photo: AP)

Mayor Bill de Blasio, a Democrat, had previously rejected imposing a curfew, as many other cities across the U.S. have done to try to curb violence that erupted amid demonstrations over Floyd’s May 25 death, police brutality and racial injustice.

But de Blasio said Monday he was talking with Police Commissioner Dermot Shea and Gov. Andrew Cuomo about the idea. The mayor emphasized that no decision had been made on a curfew, and “there are advantages and disadvantages.”

“The problem is: People need to listen to a curfew, and that’s not going to happen. If people think it will, they don’t understand what’s going on,” Shea said on NBC’s “Today.”

Cuomo, also a Democrat, said he’d talk with de Blasio but cautioned that curfews were “not a silver bullet.”

“I’m not at that point, but I know something has to be done,” the governor said at a news briefing.

A 21-year-old man was shot in the neighborhood around 12:30 a.m. and was taken to a hospital, police said. They said his injuries were not life-threatening. 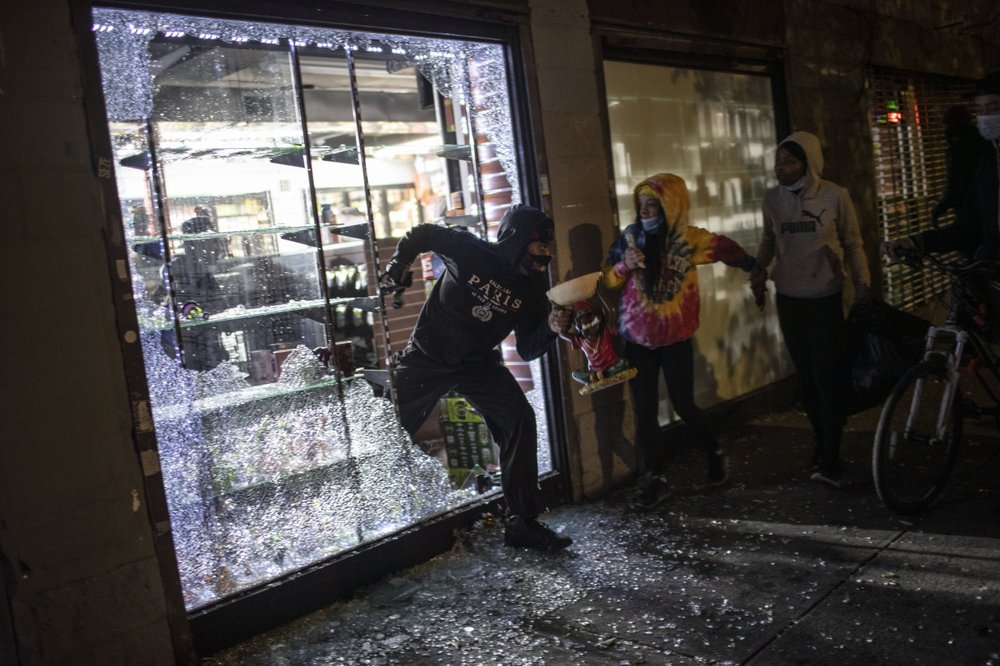 People run out of a smoke shop with smoking instruments after breaking in as police arrive on June 1, 2020, in New York. Protests were held throughout the city over the death of George Floyd, a black man in police custody in Minneapolis who died after being restrained by police officers on Memorial Day. (Photo: AP Photo)

Groups of people poured down the sidewalks in Soho and other neighborhoods including Union Square, breaking into Rolex, Kate Spade and Prada boutiques and electronics stores that have been shuttered for over two months because of the coronavirus.

“People are doing this so next time, before they think about trying to kill another black person, they’re going to be like, ’Damn, we don’t want them out here doing this ... again,’” New York City resident Sean Jones said as he watched the destruction.

On Monday morning, police were visible on some of SoHo’s hardest-hit streets, and the smell of freshly cut plywood wafted as stores boarded up.

“It’s disturbing because I’m 100% behind the protesters and against police brutality and bad cops killing people of color whenever they fricking want to, but this is a different story,” said Ruby Packard, a teacher and longtime SoHo resident.

“There are people using this as a reason to create chaos and be violent,” she added.

Sunday was the third night in a row of mainly peaceful daytime demonstrations, chaotic nights, hotspots of violence and arrests, with the mayor’s daughter among those arrested over the weekend.

An arrest report obtained by the New York Post said Chiara de Blasio, 25, refused to leave a Manhattan street that officers were clearing Saturday because people were throwing things. Chiara de Blasio, who is black, was later given a court summons and released.

Her father said Monday that he didn’t learn of her arrest until media reports emerged Sunday. He said his daughter told him she didn’t do anything wrong.

“She was very clear that she believed she was following the instructions of police officers and doing what they were asking... absolutely, she was abundantly clear she was peacefully protesting, not doing anything that would provoke a negative response,” he said at a media briefing, adding that he admired her for peacefully “trying to change something that she thought was unjust.”

Thousands of people have taken to the streets around the nation to express outrage over Floyd’s death and other killings of black people, particularly by police. Floyd, who was black, died after a white Minneapolis police officer pressed his knee on Floyd’s neck. 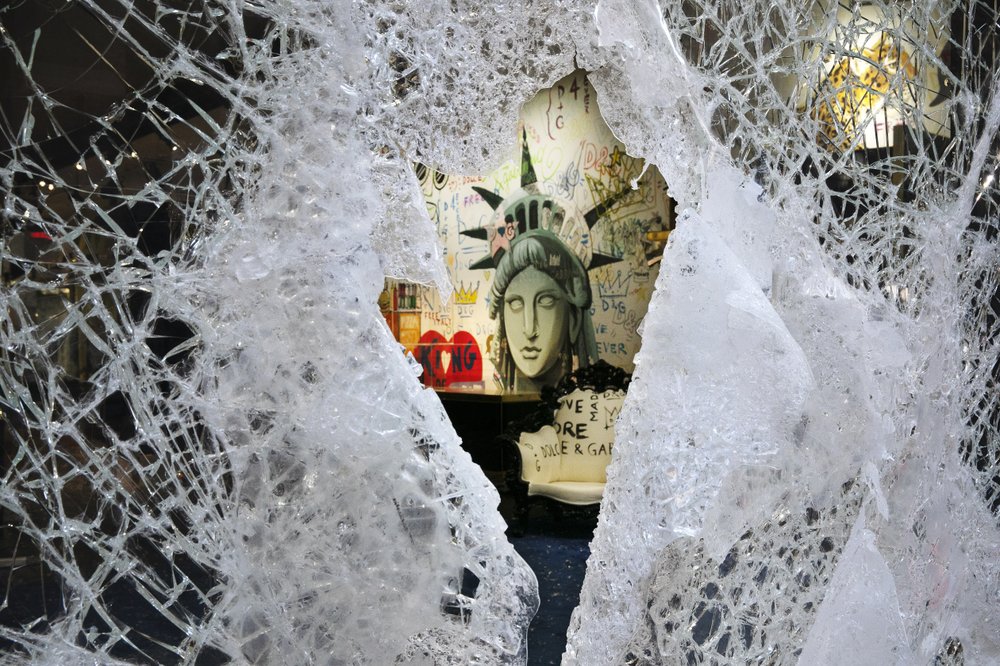 A Statue of Liberty painting is seen through a smashed Dolce and Gabbana store window, June 1, 2020, in the SoHo neighbourhood of New York. Protesters broke into the store Sunday night in reaction to George Floyd's death while in police custody on May 25 in Minneapolis. (Photo: AP)

On Sunday, New York City police made some gestures of solidarity with marchers during the day. Some officers knelt with protesters in an intersection as an organizer called out the names of people killed by police.

But the police department has come under criticism for confrontations with demonstrators over the weekend. Shea said the department is investigating officers’ behavior in about six incidents, including one in which two police vehicles plowed through a group of protesters Saturday in Brooklyn.

De Blasio, who said Saturday that the officers acted while under attack, shifted his tone Monday, saying, “it is still not acceptable for our officers to ever drive into a crowd.”

On Sunday, video posted to social media showed a police officer pulling a gun and pointing it at demonstrators on a debris-littered Manhattan street. The officer holds the gun up for about five seconds, people to hurry away, and then a supervisor comes over and ushers the officer away.

De Blasio called for the department to strip the officer of his gun and badge immediately, though the mayor noted that he didn’t know all the circumstances surrounding the moment captured on video.

“It is not the place of an officer to pull a gun on a crowd knowing that there are peaceful protesters in that crowd,” de Blasio said.

Cuomo said some police officers had exacerbated tensions with “disturbing” actions, but he also argued that violence and store break-ins hurt protesters’ cause by giving critics fuel to dismiss them as criminals.

“Last night was bad for everyone. It was bad for business owners. It was bad for the police. It’s bad for the community,” he said at a news briefing. “And it accomplishes nothing, because we’re losing the moment and we’re not even making the political point that the protesters want to make, which is a good point.”

“It has been counterproductive for New York City in many ways” amid its battle with the coronavirus and its social and economic fallout, he said.