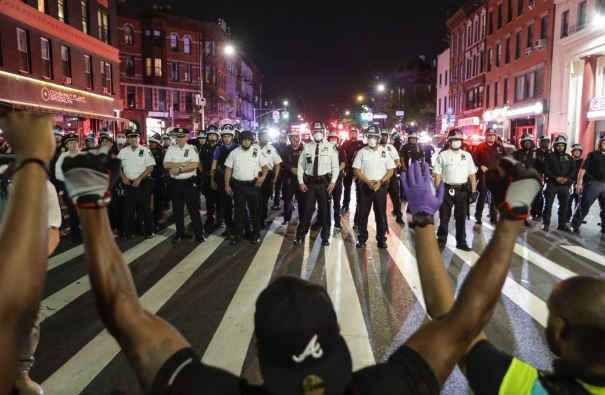 Protesters take a knee on Flatbush Avenue in front of New York City police officers during a solidarity rally for George Floyd, Thursday, June 4, 2020, in the Brooklyn borough of New York. (Photo: AP)

The latest night of protests in New York over the death of George Floyd was largely peaceful, Mayor Bill de Blasio said Friday, while promising further reform of a police department that has faced criticism for the harsh tactics used by some officers enforcing this week’s 8 p.m. curfew.

De Blasio said the city curfew would continue through Sunday, as planned, despite some signs that the city was calming and it might no longer be necessary. “We are talking about three more nights to go, which is not a long time in the scheme of things,” he said.

Alluding to instances of police enforcing the curfew aggressively, de Blasio promised unspecified police reform during the remaining year and a half of his administration.

“You will see those results, and you’ll judge for yourself as all New Yorkers do,” he said.

Protesters again stayed on the streets past 8 p.m. on Thursday in defiance of the curfew, but de Blasio noted that most of the demonstrations were peaceful and said that, in contrast to the smash-and-grab and destruction that took place earlier in the week, “there were few or no attacks on property.”

But several videos posted to Twitter on Thursday night showed police aggressively confronting peaceful protesters — often resulting in arrest — in the Bronx and elsewhere. In some places, police watched but didn’t immediately move in, or made orderly arrests without the batons and riot gear of previous nights.

De Blasio said reports of police misconduct would be investigated. “In each and every case, there must be a full investigation and where discipline is warranted it must be speedy,” he said.

More protests were planned around the city and around the nation on Friday over the death of Floyd, a black man who died May 25 in Minneapolis after a white police officer pressed a knee into Floyd’s neck.

De Blasio was booed and heckled at the service, where even some speakers took shots at the mayor, criticizing his management of the NYPD and response to the coronavirus pandemic.

The mayor tweeted early Friday that he had spoken to NYPD Commissioner Dermot Shea after seeing a video of a delivery worker arrested. De Blasio reiterated at his briefing that “any essential worker doing their job is exempted from the curfew.”

De Blasio noted that journalists, like food delivery workers, are exempted from the curfew. “There is no circumstance in which a member of the news media should ever be arrested by the NYPD or any other police organization,” he said.

De Blasio had previous condemned police for roughing up journalists, including two from the AP who were shoved, cursed at and told to go home by officers Tuesday night.