NYC mayor takes heat after lashing out at Jewish funeral 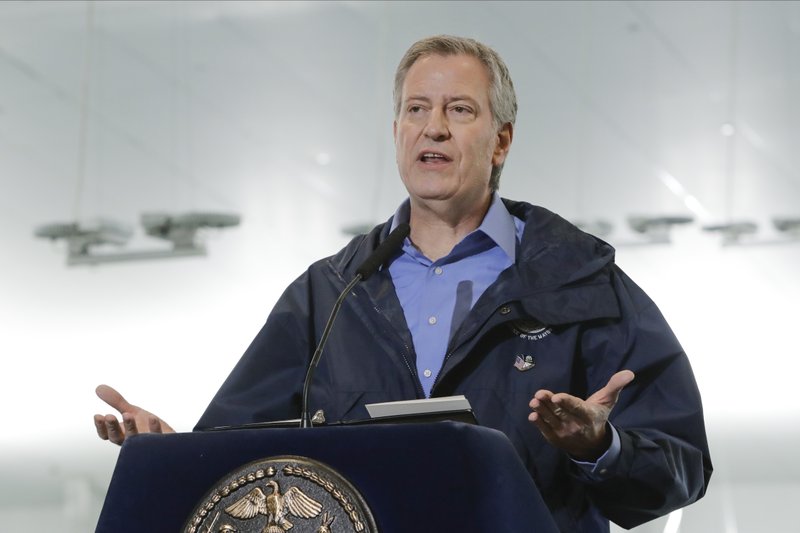 In this March 31, 2020 file photo, New York City Mayor Bill de Blasio speaks at the USTA Indoor Training Center where a 350-bed temporary hospital will be built in New York. De Blasio oversaw the dispersal of a large, tightly packed Hasidic Jewish funeral and lashed out at the mourners who had gathered in defiance of social distancing rules. He tweeted Tuesday, April 28, that his message to the Jewish community “and all communities” is that the time for warnings has passed. (Photo: AP)

Here are the latest coronavirus-related developments in New York:

De Blasio oversaw the dispersal of a large, tightly packed Hasidic Jewish funeral Tuesday night and lashed out at the mourners who had gathered in defiance of social distancing rules intended to curb the spread of the coronavirus.

“My message to the Jewish community, and all communities, is this simple: the time for warnings has passed,” de Blasio tweeted after police dispersed the funeral in the Williamsburg section of Brooklyn.

In another tweet, de Blasio called the large gathering, the latest in a string of ultra-Orthodox funerals to be broken up by police, “absolutely unacceptable.”

“What I saw WILL NOT be tolerated so long as we are fighting the Coronavirus,” he wrote.

Images posted on social media show hundreds of people on the street for the funeral of a rabbi who had died of COVID-19. Some mourners wore face coverings.

There were no arrests, but Police Commissioner Dermot Shea said Wednesday that a dozen summonses were issued citing social distancing violations and refusal to disperse.

Shea said that mourners who defy the state’s ban are not only risking giving the virus to each other, but potentially also exposing officers who have to respond for crowd control.

“You are putting my cops’ lives at risk, and it’s unacceptable,” Shea said.

Critics, however, assailed de Blasio for the language in his tweet chiding “the Jewish community” for the actions of members of one sect.

“I agree with the Mayor that social distancing is vitally important — and last night’s gathering was not appropriate,” Lauder said in a statement. “But to blame the entire Jewish community is the type of stereotyping that is dangerous and unacceptable at any time, and particularly pernicious while the world is gripped in fear and the worst among us are looking for scapegoats.”

Anti-Defamation League CEO Jonathan Greenblatt tweeted that generalizing about the whole Jewish population of New York City “is outrageous especially when so many are scapegoating Jews.”

Others noted the crowds that gathered earlier Tuesday to watch a flyover by the Navy’s Blue Angels and the Air Force’s Thunderbirds to honor health-care workers.

“Only bigots have a problem when a few 100 Hasidim do what thousands of people in the same city have done the same day (not social distance).” the Orthodox Jewish Public Affairs Council tweeted.

De Blasio said Wednesday that he was sorry if his words hurt anyone’s feelings but he didn’t regret calling out what he characterized as a dangerous violation of social distancing rules.

“If you saw anger and frustration, you’re right. I spoke out of real distress,” the mayor said. “It’s not like people gathering in the park. This was thousands of people,” he said. “What I saw, I have not seen anywhere else.”

Adherence to social distancing guidelines has been a challenge in some Orthodox Jewish communities, where trust in secular authorities is low.

Leaders of several U.S. Orthodox organizations issued a statement last month urging people to heed social distancing rules after the Fire Department had to break up a large Orthodox wedding in Brooklyn.

“The decline has been slow at best and still disgustingly high,” Cuomo said Wednesday.

The virus has claimed just over 18,000 lives statewide since the outbreak began last month, according to state figures. The state total doesn’t include more than 5,300 New York City deaths that were attributed to the virus on death certificates but weren’t confirmed by a lab test.

Cuomo said virus-related hospitalization rates continue to tick down. But the number of new hospital admissions is holding at around 950 people a day.

The coronavirus causes mild symptoms in many, but it can cause serious illness or death for some, particularly older adults and those with certain health conditions.

De Blasio announced Wednesday that antibody testing to show whether a person was previously infected with the coronavirus will be offered to 150,000 health care workers and first responders under a partnership with the federal Department of Health and Human Services. The testing will begin next week and will take place at the front-line workers’ workplaces, the mayor said.

“Anyone who has been infected and came through obviously had the ability to beat this disease,” de Blasio said. “Knowing you’ve been exposed to it is powerful information.”

A towering collage of hundreds of multi-colored face masks sent to New York to help fight the outbreak was unveiled by Cuomo at his daily briefing.

Five days after highlighting the generosity of a retired Kansas farmer who donated a mask, Cuomo said thousands more have come in from across the country.

The mix of masks included homemade coverings decorated with little hand prints, stripes and tie-dyed patterns. One read “I Love NY.” Cuomo called it a “self-portrait of America.”

“This is just people’s way of saying we care and we want to help,” he said. “This is what this country’s about. And this is what America’s about.”

Many of New York City’s suburbs have also been hit hard by the outbreak. In some, there have been more fatalities per capita than in Manhattan.

In cities around the world, public transportation systems are key to getting workers back on the job. Yet methods of getting around will have to be re-imagined for the coronavirus era.

New York City’s arts community — dancers, actors, visual artists and designers, who never made much income to start with — is especially suffering, imperiling New York City as a creative capital.