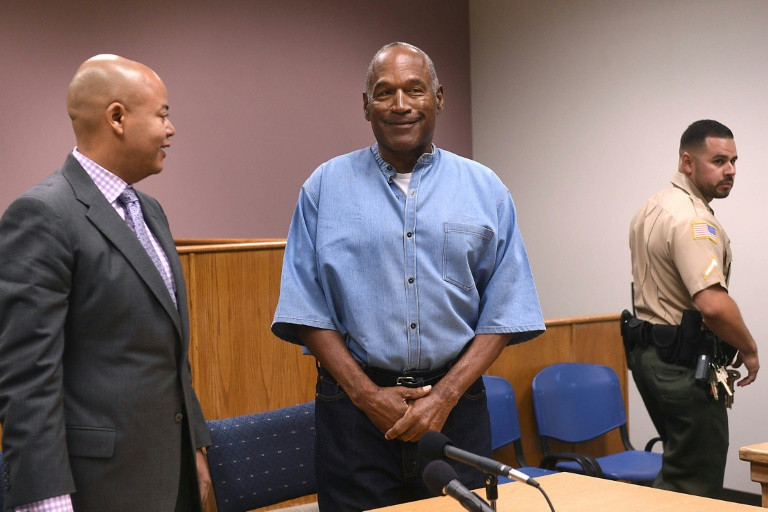 In 2006, O.J. Simpson sat down for a wide-ranging, no-holds-barred interview in which he gave a gripping "hypothetical" account of the brutal murder of his ex-wife and her friend.

For over a decade, the tapes of the infamous exchange with radio host and publisher Judith Regan were considered lost but have re-emerged, says Fox, which is finally airing the footage on Sunday.

The former football star, 70, offers a detailed and disturbing version of what might have happened on June 12, 1994, when Nicole Brown Simpson and Ron Goldman were found stabbed to death.

Under the pretext that his account is fictional, he describes grabbing a knife as he confronted his ex-wife at her home in Los Angeles but says he then blacked out and remembers only seeing everything "covered in blood."

"Forget everything you think you know about that night because I know the facts better than anyone. This is one story the whole world got wrong," says Simpson, who never took the stand during his trial.

Award-winning journalist Soledad O'Brien will front "O.J. Simpson: The Lost Confession?" lining up a panel of experts to discuss the footage.

"We're taking you inside the mind of O.J. Simpson, where nobody has ever been," Terry Wrong, executive producer of the two-hour special, told journalists in a teleconference.

Simpson was famously acquitted in 1995 of the grisly murders of Brown Simpson, 35, and Goldman, a 25-year-old waiter, in a case that transfixed the country and became known as the "Trial of the Century."

The former running back and Hollywood actor's acquittal after a nine-month trial was greeted with disbelief by many Americans, with opinion on the black athlete's guilt divided sharply along racial lines.

Simpson was subsequently found liable for the deaths in a 1997 civil suit and ordered to pay damages totaling $33.5 million.

Nine years later, HarperCollins -- owned by Fox's parent company -- announced the publication of "If I Did It," in which Simpson would describe how the real murderer would have committed the killings.

The publishing giant canceled amid a public backlash and the rights switched to the Goldman family, who published their own version in 2007 with their added comments.

They used a new cover that hugely reduced the size of the "If" compared with the other words and added "Confessions of the Killer" to the title.

The interview with Regan, who had been overseeing the book's publication, was supposed to promote sales but the victims' families objected and it was mothballed.

It is not clear how the tapes were suddenly discovered after all these years, leading CNN to suggest they may have been kept back as a "counter-programming stunt" to undermine ABC's "American Idol" premiere.

Wrong suggested "forgotten," "ignored" or "relegated" might be better ways to describe the material than "lost" but added that they "weren't in anybody's consciousness" when their existence was first flagged up.

AFP has seen the original raw footage of the interview, in which Regan asks Simpson -- "knowing that it's hypothetical" -- to walk her through what "might have happened" on the night of the murders.

Simpson, who is initially hesitant, recounts how he and a new friend named Charlie went to Brown Simpson's condo in the palatial Brentwood neighborhood.

The pair entered the back gate, he adds, where Simpson got into a shouting match with Goldman, who had just arrived, and Brown Simpson, who had come outside.

Simpson said he kept a knife in the car "for the crazies" and added that Charlie had followed Goldman, carrying the knife.

"As things got heated, I just remember Nicole fell and hurt herself. This guy got into a karate thing and I said, 'Well, you think you can kick my ass?'

"I remember I grabbed the knife -- I do remember that portion, taking the knife from Charlie."

Simpson says he can't go on any further, but he is persuaded to continue and repeats virtually word for word what he has just said.

"And to be honest, after that, I don't remember, except I'm standing there and there's all kinds of stuff around. Blood and stuff," he adds.

Regan reminds Simpson that he wrote in the book that he "had never seen so much blood" and that he was "covered" in it.

"I didn't think anybody could be murdered the way they were without everybody covered in blood. We've all seen the grisly pictures after," he says.

"Everything was covered, would have been covered in blood... It was horrible. It was absolutely horrible."