By HENG WEILI and ANDREW COHEN in New York | chinadaily.com.cn 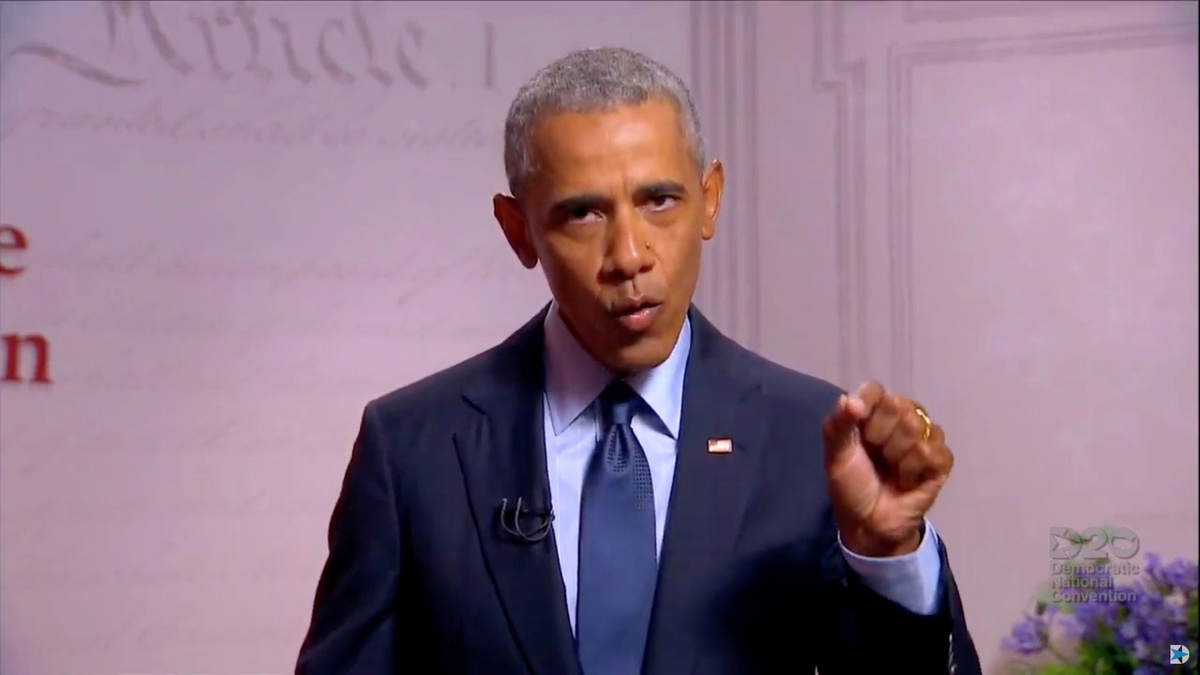 Former US President Barack Obama speaks by video feed during the virtual 2020 Democratic National Convention as participants from across the country are hosted over video links from the originally planned site of the convention in Milwaukee, Wisconsin, US August 19, 2020. 2020. (Photo: Agencies)

"Donald Trump hasn't grown into the job because he can't. And the consequences of that failure are severe. 170,000 Americans dead. Millions of jobs gone. Our worst impulses unleashed, our proud reputation around the world badly diminished, and our democratic institutions threatened like never before," Obama said from the Museum of the American Revolution in Philadelphia on the third night of the virtual Democratic National Convention (DNC).

The DNC released highlights of the prominent speeches before they were aired, starting at 10 pm EDT on the major television networks. Also speaking Wednesday were Senator Kamala Harris of California, Biden's running mate, and former secretary of state Hillary Clinton.

Obama, 59, a two-term president who has remained enormously popular with Democrats, was given the final speaking spot of the evening but relinquished it to Harris, ABC News reported.

Obama said that Trump has "shown no interest in putting in the work; no interest in finding common ground; no interest in using the awesome power of his office to help anyone but himself and his friends; no interest in treating the presidency as anything but one more reality show that he can use to get the attention he craves".

"Twelve years ago, when I began my search for a vice-president, I didn't know I'd end up finding a brother," Obama said. "Joe and I came from different places and different generations. But what I quickly came to admire about him is his resilience, born of too much struggle; his empathy, born of too much grief."

Trump, not hesitant to weigh in during the DNC, pinned this line on his Twitter page: "Welcome, Barack and Crooked Hillary. See you on the field of battle!"

Harris, the daughter of Jamaican and Asian Indian immigrants, is the first woman of color to serve on a major political party ticket.

She said she is committed to "a vision of our nation as a beloved community — where all are welcome, no matter what we look like, where we come from, or who we love. A country where we may not agree on every detail, but we are united by the fundamental belief that every human being is of infinite worth, deserving of compassion, dignity and respect.

"A country where we look out for one another, where we rise and fall as one, where we face our challenges, and celebrate our triumphs. Together. Today, that country feels distant. Donald Trump's failure of leadership has cost lives and livelihoods.

"We're at an inflection point. The constant chaos leaves us adrift," continued Harris, 55, who also once served as California's attorney general and herself was a Democratic primary presidential candidate. "The incompetence makes us feel afraid. The callousness makes us feel alone. It's a lot. And here's the thing: We can do better and deserve so much more.

Hillary Clinton, who lost to Trump in a bitter contest in 2016, said: "For four years, people have said to me, 'I didn't realize how dangerous he was', 'I wish I could go back and do it over', or worst, 'I should have voted'. Well, this can't be another woulda, coulda, shoulda election," Clinton said.

"I wish Donald Trump had been a better president. But, sadly, he is who he is. America needs a president who shows the same compassion, determination and leadership in the White House that we see in our communities," Clinton said.

Under the theme "A More Perfect Union", the DNC also highlighted solutions for gun violence, climate change, immigration reform, economic issues and the role of women in political leadership.

Biden, 77, will deliver his acceptance speech Thursday night, the last night of the convention.

Senator Elizabeth Warren of Massachusetts, a progressive candidate who once led the field earlier in the contest, also spoke passionately on Wednesday, criticizing the administration's handling of the pandemic and its impact on schools.

"COVID-19 was Trump's biggest test. He failed miserably," she said.