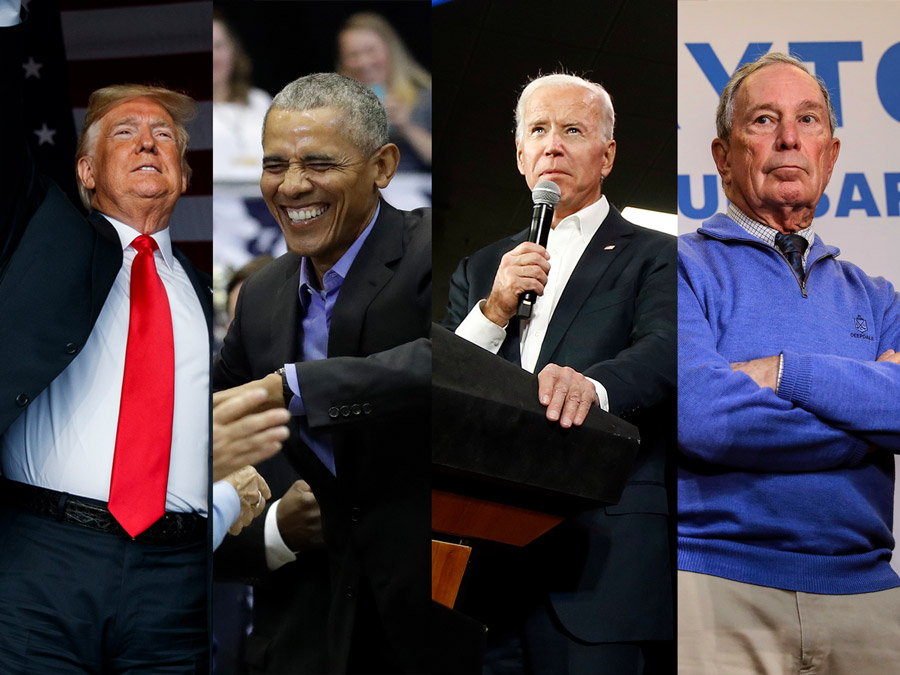 No longer reluctant to speak out, former President Barack Obama delivered a closing argument for Democrats that seeks a firm check on President Donald Trump's policies in Tuesday's midterm elections.

Obama and Trump offered competing visions for the country in a split screen of campaigning on Sunday, seeking to galvanize voter turnout in the fight to control Congress and governors' mansions.

Obama rallied Democrats in Gary, Indiana, on behalf of Sen. Joe Donnelly, D-Ind., who faces a stiff challenge from Republican businessman Mike Braun. Later in the day, the former president campaigned in his hometown of Chicago for businessman J.B. Pritzker, Democrats' nominee for Illinois governor.

Obama has taken on a more public role this fall after refraining from offering a full-blown counterpoint to Trump's policies, which have sought to dismantle Obama's legacy. Without invoking his name, Obama has accused Trump of lying and "fear-mongering" and warned Democrats not to be distracted.

Trump has punched back, accusing Obama of leaving behind a trail of broken promises on trade, the economic recovery and a promise during his presidency that patients could keep their doctors under his health care law.

Trump headlined Sunday rallies in Macon, Georgia, and Chattanooga, Tennessee, supporting Republican Brian Kemp, who is running for Georgia governor, and Rep. Marsha Blackburn, who is seeking an open Senate seat in Tennessee.

A look at campaign activities on Sunday: 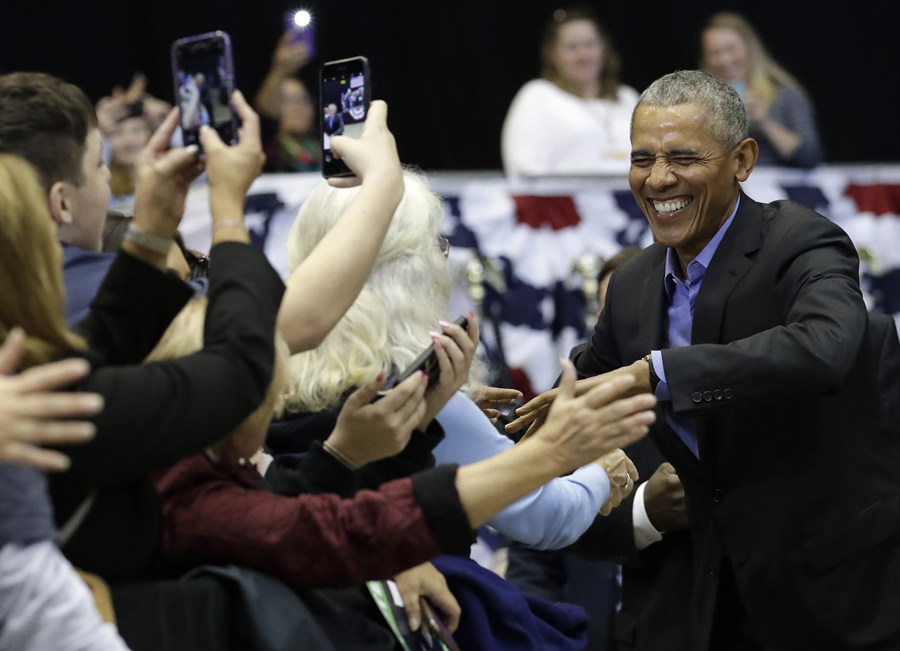 Obama praised Donnelly during a rally in northwest Indiana as someone who's honest and direct, telling voters, "You don't want a 'yes' man."

Obama's appearance in Gary was sandwiched between Trump's trips to Indiana on Friday and Monday to help Braun.

Donnelly has often sounded far more like Trump than Obama on issues. He angered some Democrats by embracing some of Trump's priorities, including a border wall with Mexico. But he has supported the Affordable Care Act, the health care overhaul signed into law by Obama.

The former president told thousands of cheering supporters that he and Donnelly don't always agree. But he said it was more important to elect a senator who will put what's best for his state over his party. 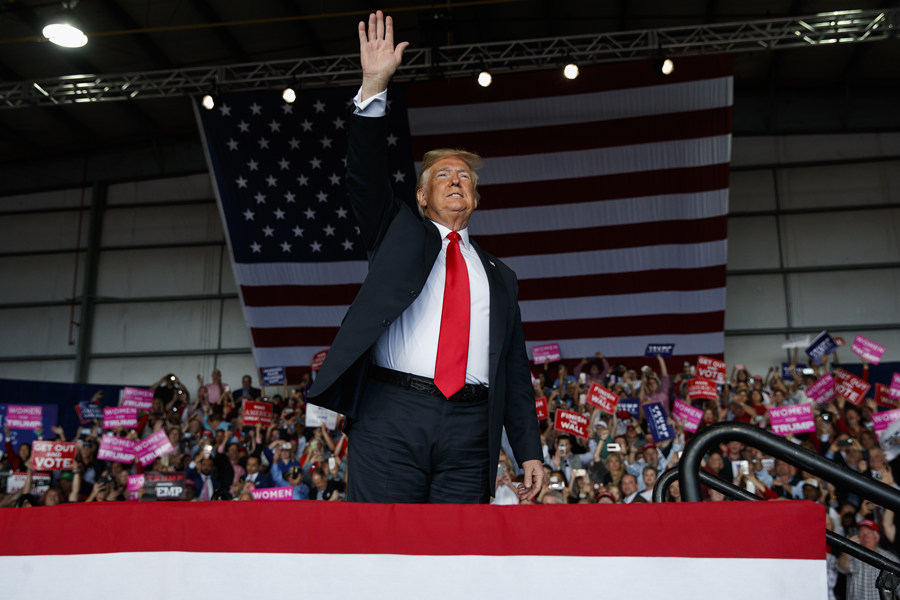 Rallying his faithful in Macon, Georgia, Trump praised Kemp as a "strong man" and "strong personality" and said Kemp would become a great governor for Georgia.

The president assailed Kemp's Democratic opponent, Stacey Abrams, as "one of the most extreme far-left politicians in the entire country."

The Georgia race has garnered attention from a list of high-profile backers, including Oprah Winfrey, who campaigned for Abrams last week. Abrams is attempting to become the nation's first black female governor.

Trump said Winfrey was a friend of his until he ran for president but he is now urging Georgia voters to listen to his endorsement instead of hers. 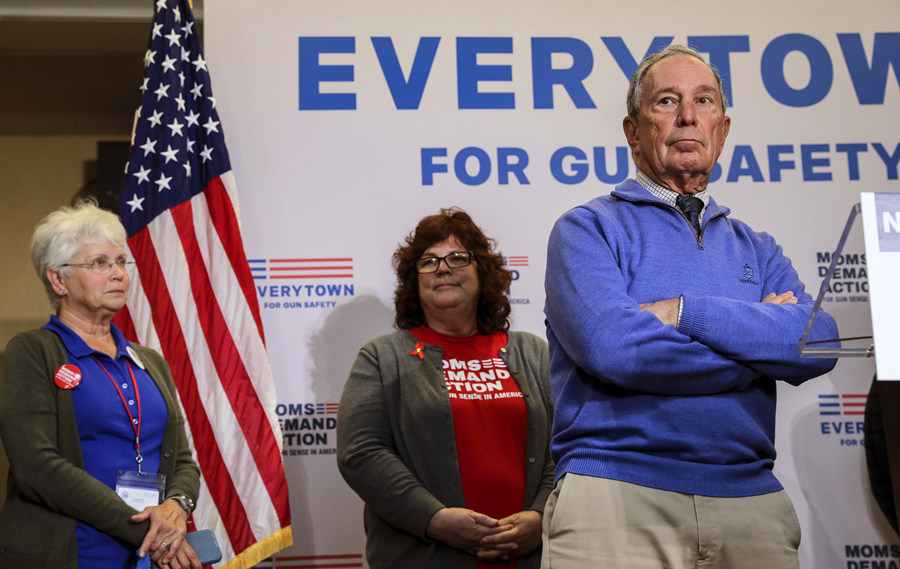 Former New York Mayor Michael Bloomberg is pumping another $5 million in national advertising into the final two days before the midterm elections, urging voters to support Democrats because of his concern about "the direction of our nation."

Bloomberg, the billionaire independent who is considering a 2020 presidential campaign as a Democrat, appears in the 2-minute ad airing Sunday during CBS's "60 Minutes." It will also air Monday on cable and broadcast networks.

Bloomberg says in the ad that the nation needs to support Democrats to "send a signal to Republicans in Washington that they have failed to lead, failed to find solutions, and failed to bring us together." 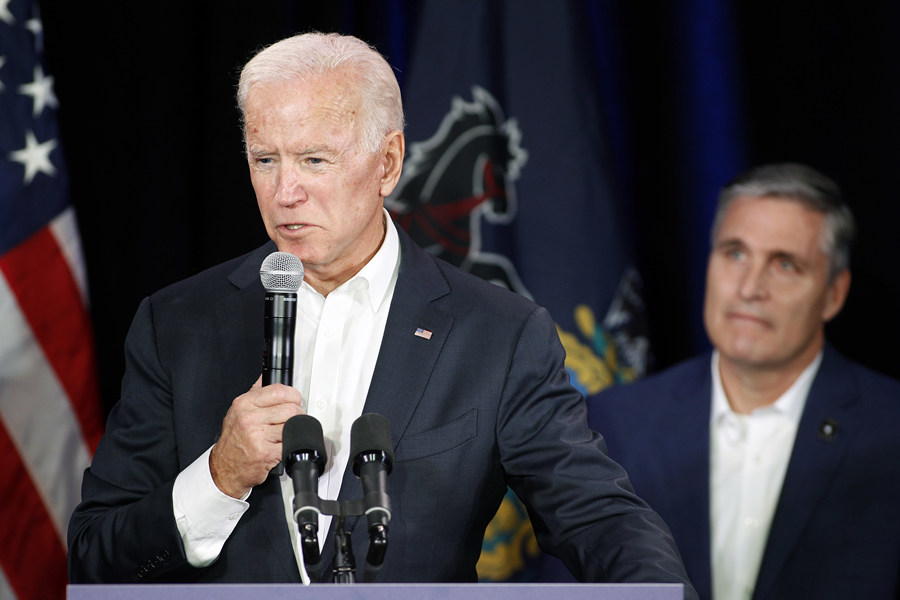 In Pennsylvania, a hoarse former Vice President Joe Biden accused the Trump administration of shredding the nation's "moral fabric" and a GOP-controlled Congress of waging a broad war on middle-class protections, from health care to Social Security.

Democrats, he said, must take back the country to reset the nation's moral compass.

"This is the United States of America," Biden said. "We can take it back."

Biden, campaigning in a tight congressional race in conservative central Pennsylvania, urged people to vote — "Don't boo, vote!" he told the crowd, quoting Obama — and said, "We are in a battle for America's soul."

Biden spoke to a crowd of more than 500 people at the Pennsylvania Farm Show Complex in Harrisburg to boost George Scott, a Democratic candidate for Congress challenging three-term Republican Rep. Scott Perry.

Biden traced a line from the mass killing in a Pittsburgh synagogue and the slaying of two black shoppers at a Kentucky grocery store last month to Trump's remarks after clashes between white supremacists and counterprotesters in Charlottesville when he blamed both sides for the violence.

"When hatred is given space to fester, it gives license to others to come out from the darkness," Biden said, accusing Trump of putting "fuel on the fire of intolerance."

The White House pushed back against claims that Trump's recent steps to secure the US southern border were motivated by the upcoming election.

Secretary of State Mike Pompeo said in an interview with CBS' "Face the Nation" that the president's moves had nothing to do with electoral politics.

"I've been involved in scores of conversations about stopping illegal immigration from Mexico and never once has there been a discussion of the political impact in US domestic politics," Pompeo said. "It has always been about securing the safety of the American people and securing our southern border."

Trump is sending up to 15,000 US troops to the border to stave off a caravan of migrants slowly making its way through southern Mexico, hundreds of miles from the border. Trump has also announced plans to try to end the constitutionally protected right of birthright citizenship for all children born in the US.

Republicans predicted that they would pad their two-seat Senate majority even though the party of a first-term president typically struggles in midterm elections. Democrats are defending 10 Senate seats in states Trump carried in 2016.

Sen. Thom Tillis, R-N.C., said Republicans would not only "hold the majority — I believe we're going to add to it." Republican National Committee Chairwoman Ronna McDaniel pointed to the recent October jobs report as evidence Republicans are delivering.

Sen. Mark Warner, D-Va., said that even if voters are motivated by a strong economy, "many people realize we need a check on this president." And Sen. Chris Van Hollen, D-Md., said the party still has a "very narrow path" to a Senate majority despite facing the toughest Senate political map in 60 years.

Warner, the ranking Democrat on the Senate intelligence committee, said that people should "go out and vote with confidence" but that the White House has "frankly held back" on ensuring the election will be secure.

The Virginia Democrat faulted the White House for opposing an election security bill that would have ensured that every polling station had a paper ballot to audit after the election. And he questioned Trump's decision to eliminate the role of cybersecurity coordinator on the National Security Council.