Federal officials are examining whether the employee who reported an explosion at Northeastern University may have lied to investigators and staged the incident, law enforcement officials said Wednesday. 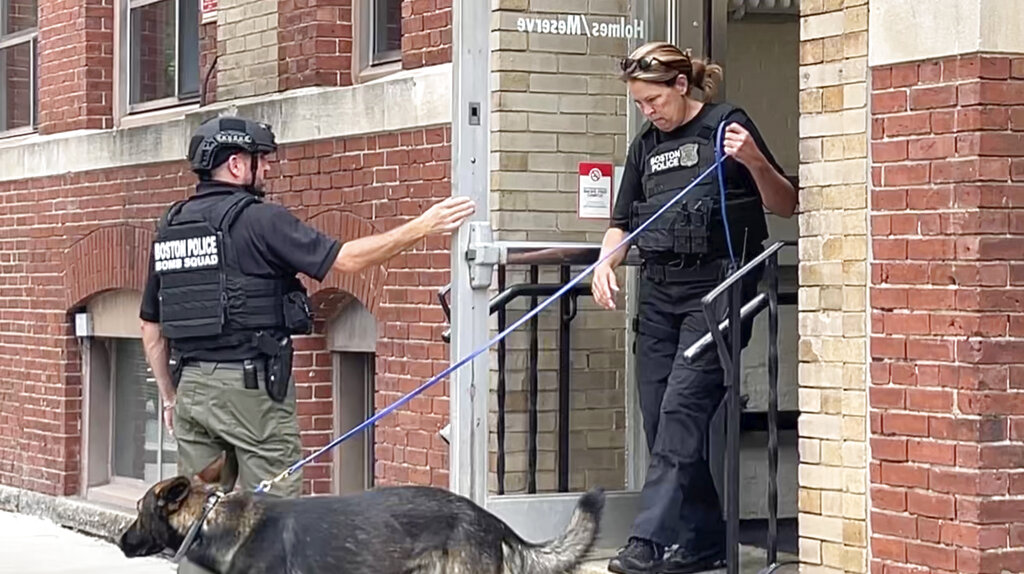 In a still photograph taken from video, a Boston Police bomb squad officer, left, and a K-9 unit officer, right, depart a building on the campus of Northeastern University, Wednesday, Sept. 14, 2022, in Boston. (Photo: AP)

Investigators identified inconsistencies in the employee's statement and became skeptical because his injuries did not match wounds typically consistent with an explosion, said one official.

The officials could not discuss details of the investigation publicly and spoke to The Associated Press on condition of anonymity.

The Northeastern staff member said late Tuesday the hard plastic case exploded on the campus in Boston, causing minor injuries, according to authorities.

In an interview with The Boston Globe, the employee denied staging the explosion, calling the event "very traumatic."

"I did not stage this … No way, shape or form ... they need to catch the guy that did this," he told the newspaper. He didn't immediately respond to an email Wednesday from The Associated Press.

The case contained a rambling note that railed against virtual reality and also referenced Facebook founder Mark Zuckerberg, a law enforcement official said. No explosive materials were found and they do not believe the package was sent through the U.S. Postal Service, the official said.

The official described the case as a "Pelican-style" case. Pelican is a company that makes hard cases designed to protect sensitive equipment.

A spokesperson for the FBI office in Boston declined to comment Wednesday, saying the investigation is "still very active and fluid."

Northeastern in a message posted on its website Wednesday said the campus is safe.

"Events such as the incident that took place on our Boston campus last night can create or heighten anxiety for many of us," said the post, credited to Provost David Madigan and Chancellor Kenneth Henderson. "We would like to underscore what was communicated to our community last night: Multiple law enforcement agencies have determined that the campus is safe and secure."

The campus opened normally for classes and other activities Wednesday. Counseling and other support services were made available for students, faculty and staff.

Despite reassurances from the school, many students remain concerned.

"Every time I go to a class or dining hall or anything in general, people are just talking about what's going on and what went on yesterday," student Lisbeth Martinez said Wednesday. "A lot of people are still anxious and obviously scared of the situation."

The package delivered to Holmes Hall detonated just after 7 p.m. Tuesday when a staff member opened it, the university had said in a statement. The staff member, a 45-year-old man, was taken to the hospital with minor injuries to his hand, police said. No name was made public.

Boston's bomb squad neutralized a second package near the city's Museum of Fine Arts, which is near Northeastern's campus.

Holmes Hall is home to the university's Immersive Media Labs, which according to its website includes technologies for design, development, and exploration of virtual worlds. It is also home to the creative writing program and the women's, gender and sexuality studies program.

Northeastern is a private university in downtown Boston with about 16,000 undergraduate students.

The case marks one of the first big scares in Boston since 2013, when two bombs planted near the finish line of the Boston Marathon killed three spectators and wounded more than 260 others.