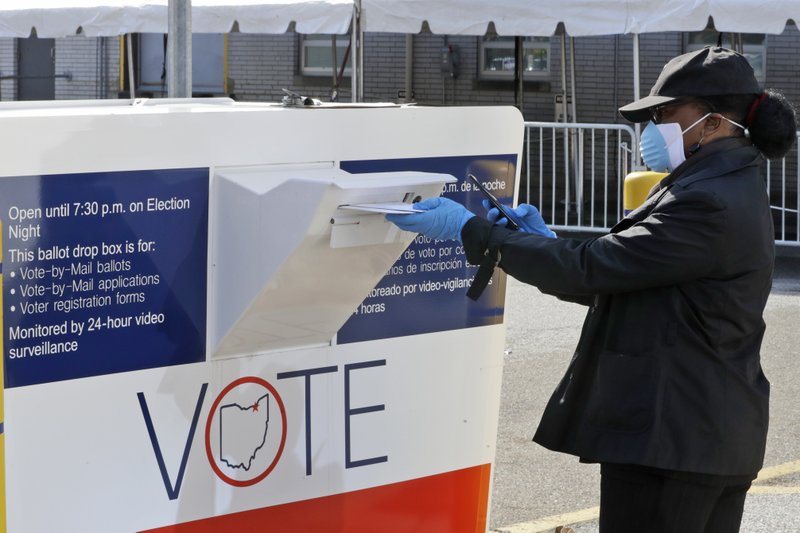 Marcia McCoy drops her ballot into a box outside the Cuyahoga County Board of Elections, Tuesday, April 28, 2020, in Cleveland, Ohio. The first major test of an almost completely vote-by-mail election during a pandemic is unfolding Tuesday in Ohio, offering lessons to other states about how to conduct one of the most basic acts of democracy amid a health crisis. (Photo: AP)

The first major test of an almost completely vote-by-mail election during a pandemic is unfolding Tuesday in Ohio, offering lessons to other states about how to conduct one of the most basic acts of democracy amid a health crisis.

The process hasn’t been smooth as state officials have navigated election laws and the need to protect citizens and poll workers from the coronavirus. Ohio’s in-person primary was delayed just hours before polls were supposed to open last month, prompting legal challenges and confusion.

Tuesday’s election replacing it requires voters to run at least three pieces of mail — an application, a blank ballot and a completed one — through the U.S. Postal Service.

With Joe Biden emerging as the presumptive Democratic presidential nominee, there’s little suspense in the results. Ohio’s vote is instead being closely watched as a case study for how to proceed with elections if the pandemic doesn’t ease. States have taken drastically different approaches, with Wisconsin proceeding with in-person voting earlier this month and New York saying Monday it would cancel its presidential primary, which was scheduled for June.

Some governors have suggested they would consider moving to an all-mail voting system for the November general election, something President Donald Trump has strongly opposed. The National Conference of State Legislatures says five states currently conduct all elections entirely by mail: Colorado, Hawaii, Oregon, Washington and Utah.

As he prepared for the results, Ohio Republican Secretary of State Frank LaRose warned the process could be bumpy.

“A lot of things will look like election night, but then some things won’t,” LaRose said in an interview last week.

There will still be some in-person voting on Tuesday. Ohio law guarantees that any voter who doesn’t receive a ballot they requested by the legal deadline has the right to vote in person, meaning they could appear at county boards if they don’t get one by Tuesday afternoon — or potentially sue.

Maryland was also grappling with how to vote safely on Tuesday as polling centers opened to conduct a special election to finish the term of the late Rep. Elijah Cummings.

But most of the focus was on Ohio, where the mail-in election is playing out at a time when support for such a process is rising. A new poll from The Associated Press-NORC Center for Public Affairs Research finds Democrats are now much more likely than Republicans to support their state conducting elections exclusively by mail, 47% to 29%. In 2018, about half as many Democrats were in favor, and there was little difference in the views of supporters from each party.

LaRose and Ohio’s Republican governor, Mike DeWine, have both been longtime supporters of increasing voting-by-mail options, but the political dynamics could change as the coronavirus redraws the political landscape.

Lynne Marshall, of Sylvania, Ohio, opened her mailbox Tuesday and was disappointed to see that her ballot had not arrived after a monthlong wait and countless calls to the state and local election offices.

She spent the next minutes agonizing over whether to cast a provisional vote in person at the election board and put her health at risk or stay home and skip voting for the first time that she can remember.

“I don’t know what to do,” she said. “What should I do? I’m just really disgusted with it all. Of course, I’ll feel guilty if I don’t vote.”

Jen Miller, the head of the League of Women Voters in Ohio said it will be impossible to know how many people stayed home because they didn’t get a ballot in time.

“I do suspect a lot of people are waiting to see if their ballot comes in the mail today,” said Miller, the organization’s state director. “We’ve had people waiting weeks and weeks.”

One thing that won’t be in doubt Tuesday is the presidential primary results since Biden is the only candidate left in the race. Still, early voting began Feb. 19, so Vermont Sen. Bernie Sanders could pick up Ohio delegates, despite suspending his campaign nearly three weeks ago.

Sanders has said he’d like to collect as many delegates as possible to influence the party platform at the Democratic National Convention, but he’s already endorsed Biden. The former vice president has suggested that a convention already delayed from June until August because of the coronavirus may have to be held entirely virtually,further defusing the possibility of a nasty floor fight.

Traditionally a general election battleground state, Ohio has shifted to more consistently Republican in recent cycles. Trump won it by a surprisingly high 8 percentage points in 2016, after Barack Obama, with Biden as his running mate, carried the state twice.