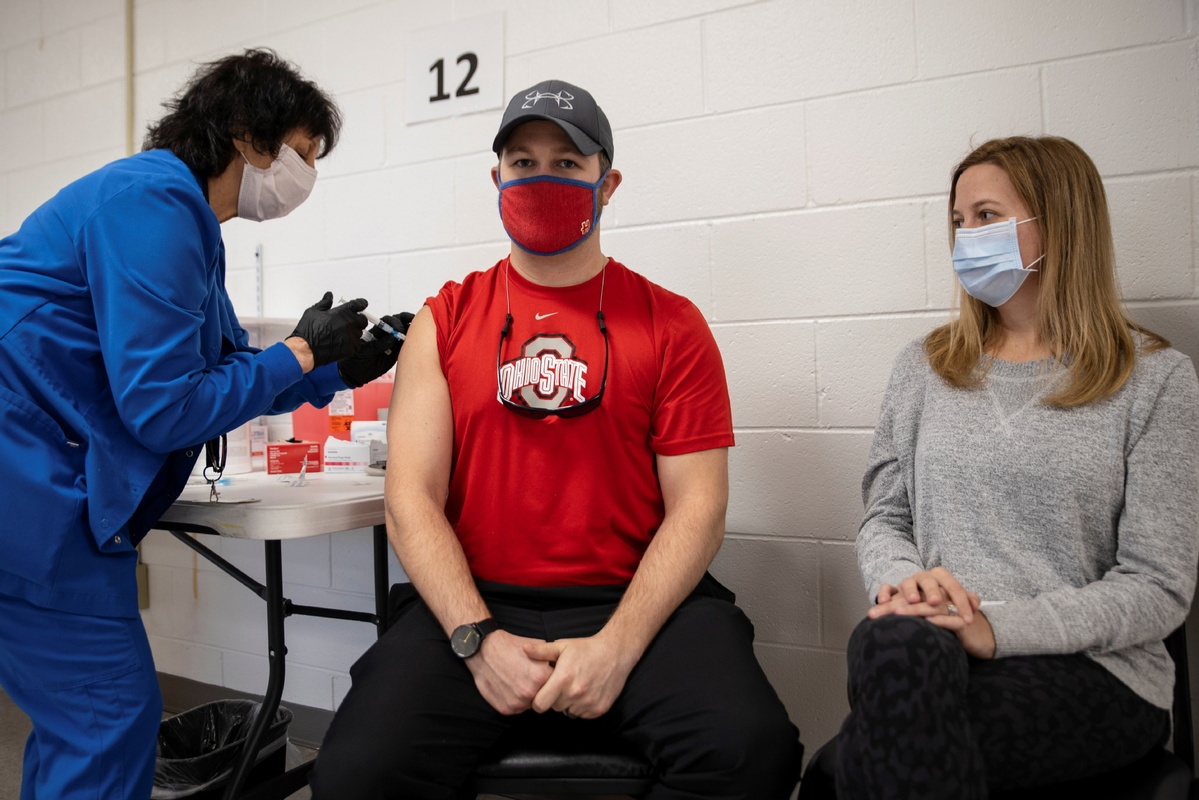 A man receives his coronavirus disease (COVID-19) vaccine at the Bradfield Community Center through Health Partners of Western Ohio in Lima, Ohio, US, March 29, 2021. (Photo: Agencies)

An effort by Ohio to have hesitant residents get COVID-19 vaccination shots is paying off.

One person won the state's first $1 million "Vax-a-Million" vaccination prize, and a teenager won the first full college scholarship to any Ohio college.

Abbey Bugenske was one of 2.76 million adults who signed up for the $1 million prize, which will take place on five consecutive Wednesdays.

"I was screaming enough that my parents thought that I was crying and that something was wrong," Bugenske, 22, said Thursday morning during a news conference. "I started yelling that I won a million dollars and I was going to be a millionaire; they told me to calm down and make sure it wasn't a prank before I really started freaking out."

Costello was one of 104,000 children ages 12 to 17 who entered the drawing for the college scholarship — the prize for entrants under 18.

Four more drawings for a million-dollar prize and college scholarships will take place each Monday in June.

"We're excited that this has inspired so many Ohioans to get vaccinated," said Governor Mike DeWine on Wednesday.

He announced the competition, which is funded by federal COVID-19 stimulus money, on May 12 as part of a nationwide effort to get people vaccinated.

Five days after the vaccination-prize rollout, the Ohio Department of Health said the campaign had driven a 28 percent increase in the vaccination rate of those age 16 and older.

There have been about 1 million coronavirus cases in Ohio. About 45 percent of the state's residents, or 5.2 million people, had been vaccinated against COVID-19 as of Thursday, according to the Ohio Department of Health.

California which has seen its vaccination rate decline, upped the ante on Thursday with its "Vax for the Win" program, state officials announced.

"It's our biggest 'thank you' yet to Californians who have received their COVID-19 vaccine. Ten winners will be selected on June 15 to receive $1.5 million each — prizes totaling $15 million! All Californians who have had at least one COVID-19 dose will automatically be entered," the initiative's website says.

Starting on May 27, the first 2 million people in Californians to start and finish their COVID-19 vaccinations will receive a $50 virtual card for online purchases or one to be used at grocery stores.

Colorado, Maryland and Oregon have held incentives to boost waning vaccinations. New Jersey and Connecticut are offering free beers to adults who get their shots, and West Virginia is offering a $100 state savings bond.

Nearly 166 million people — about half of US adults — have received at least one shot and nearly 133 million people — 40 percent of the population — are fully vaccinated, according to data published Thursday by the Centers for Disease Control and Prevention (CDC).

That's about 1.5 million more doses reported administered since Wednesday, for a seven-day average of about 1.6 million doses per day, the lowest seven-day average in about three months ago, since the end of February, according to CNN.