WORLD Oil from spill in Brazil washes up in Rio state

Oil from spill in Brazil washes up in Rio state 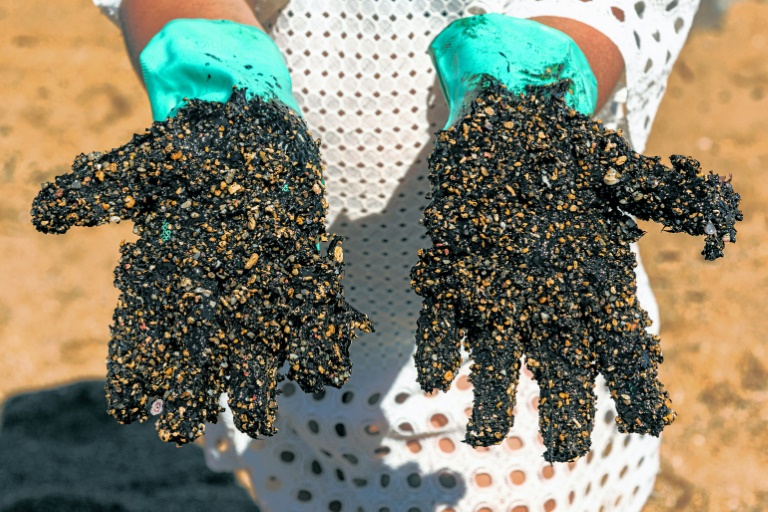 A volunteer shows his crude-encrusted gloves at Praia de Busca Vida beach in Bahia state during a cleanup operation on November 3, 2019. (Photo: AFP)

Oil from a spill that has contaminated a stretch of Brazil's coast was detected in Rio de Janeiro state, the navy said Saturday, as President Jair Bolsonaro warned the country was preparing for the worst.

Some 300 grams -- a small quantity of oil -- were found far from the region's most famous beaches, in the sand in the town of Sao Joao da Barra, as the spill moves southward.

The town is located about 300 kilometers (180 miles) north of Rio de Janeiro, Brazil's tourism capital, and far from the state's most emblematic beaches such as Copacabana.

"The samples analyzed are compatible with the oil found on the northeast coast," the navy said in a statement.

On Saturday, Bolsonaro said that "we still don't know how much oil is left in the sea."

"In the worst case, if an oil tanker unloaded all of its cargo into the sea, less than 10 percent has reached our shores, which is why we are preparing for the worst," he said, speaking outside a military ceremony in Rio de Janeiro.

Patches of oil have turned up along a 2,000-kilometer stretch of Atlantic coastline, after oil started tarnishing beaches in Paraiba state in late August.

It has since spread dramatically and reached Espirito Santo state, which neighbors Rio.

Brazil's environmental protection agency Ibama has identified more than 700 locations where the coast has been contaminated.

Workers and volunteers wearing rubber gloves are racing against time to clear beaches ahead of the country's peak tourism season.

According to the Navy, more than 4,500 tons of oil has been removed and more than 5,000 soldiers mobilized for cleaning operations.

The spill has proven deadly for dozens of types of animals, including turtles, and has also reached a humpback whale sanctuary off Bahia state, which has some of the country's richest biodiversity.

It is the third major environmental disaster to strike Brazil this year.

In recent months fires ravaged the Amazon rainforest and in January a mine dam collapsed in the southeast, spewing millions of tons of toxic waste across the countryside.

Early this month, the government named a Greek-flagged tanker as the "prime suspect" for being the source of the oil slicks.

The ship, "Bouboulina," took on oil in Venezuela and was headed for Singapore, it said.

The tanker's operators have denied the vessel was to blame.