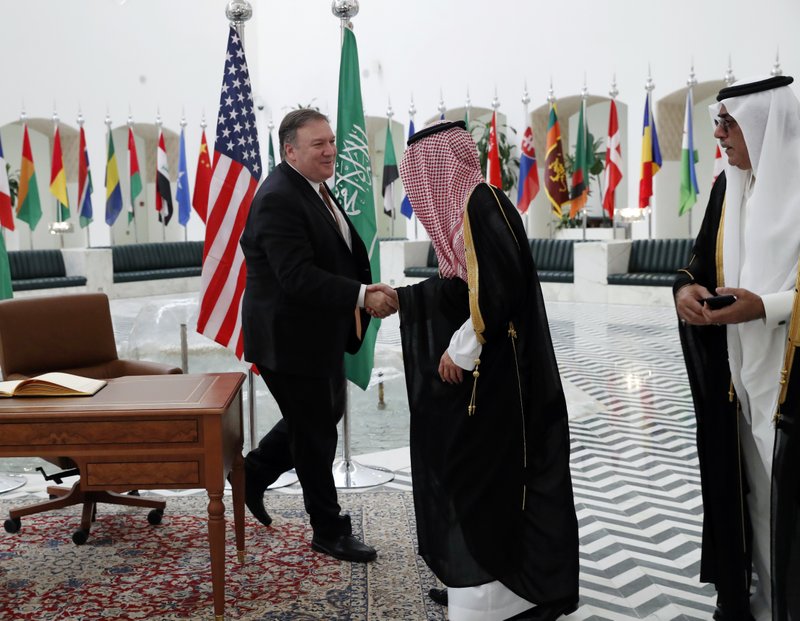 Saudi Arabia's status as the biggest oil exporter gives it the power to jolt the global economy — if it wants.

That was the kingdom's message when it warned Washington and President Donald Trump against imposing sanctions over the disappearance of Saudi journalist Jamal Khashoggi, a U.S. resident.

Trump, who bragged at rallies about his business dealings with rich Saudis, said over the weekend there would be "severe punishment" if evidence points to Saudi responsibility for Khashoggi's disappearance. On Sunday, the Saudi government threatened to retaliate against any punishment such as economic sanctions, outside political pressure or even "repeated false accusations."

Trump tempered his comments on Monday after talking to Saudi King Salman and suggested "rogue killers" may be to blame. He dispatched Secretary of State Mike Pompeo to visit the king. And Saudi Arabia's energy minister seemed to walk back Riyadh's threat the next day.

But if the United States were to follow through with sanctions — as some lawmakers such as Republican Sens. Mark Rubio of Florida and Jeff Flake of Arizona have urged — the Saudis could react by reducing oil exports. That would lead to a steep increase in prices, perhaps to $100 a barrel, in the view of some analysts.

Globally, the kingdom wields enormous influence over prices. It is the de facto leader of the Organization of the Petroleum Exporting Countries, which together account for about one-third of global crude production. The Saudis have more spare production capacity than anyone else; no other producer appears able to fill the void if Saudi oil were to disappear from the market.

That means Saudi Arabia could cause trouble for Trump ahead of next month's elections, in which the Republican party is trying to avoid losing control of the House of Representatives. Just announcing a production cut would cause an immediate price spike — a prospect that would deter significant U.S. sanctions.

"From Trump's point of view, given the mid-term elections are lurking, that could have an impact," said Paul Stevens, an oil expert at the Chatham House, a London think tank. "Simply stating that — threatening it — might be enough to tip the balance."

The Saudis have reason to step back from the precipice. Their economy still depends on oil, and the U.S. is the third-biggest destination for Saudi crude, according to ClipperData. Crown Prince Mohammed bin Salman has laid out an ambitious vision of diversifying the economy, but it is only a vision.

Energy analyst Phil Flynn said that if Saudi Arabia did anything to cause a price surge, "they would be shooting themselves in the foot. If they cut off supplies, it could put the world into a recession and that would lower the demand for oil."

Other analysts said an oil shock would accelerate efforts in consuming countries to switch to other forms of energy.

U.S. reliance on Saudi oil has declined as domestic production soared during the shale-drilling boom of the past decade. America has likely already passed Russia and Saudi Arabia to become the world's biggest oil producer, according to U.S. government estimates.

In July, about 11 percent of U.S. imports came from Saudi Arabia, compared with 45 percent from Canada, according to the U.S. Energy Information Administration.

Still, any disruption would hurt both U.S. and Saudi interests, and leaders of both countries want to ensure that the relationship survives, said Kevin Book, an analyst with ClearView Energy Partners. The U.S. views Saudi Arabia as a key ally in fighting Islamic terrorism and serving as a counterweight to Iran.

"Oil is part of the story, but the U.S.-Saudi relationship is forged on bigger things," Book said. "The relationship has had its ups and downs, but I don't think anybody in any administration would want to throw the baby out with the bath water, and certainly not throw out the oil."

For decades, Saudi Arabia has sent oil to the United States and the U.S. has sent fighter planes and other weapons to the kingdom. Trump has said repeatedly that he does not want to stop a proposed $110 billion arms sale to the Saudis — even though some in Congress say he should — because it would cost jobs in the U.S.

"We would be punishing ourselves," said Trump, whose first foreign trip as president was to Saudi Arabia.

The Saudis have suffered what they considered indignities from the U.S. without using oil as a weapon in the past. In 2013, the Riyadh government took the rare step of rejecting a U.N. Security Council seat in what was widely seen as anger over a muted international response to violence in Syria and a nuclear deal with Iran.

Three years later, the Saudis were unhappy but took no action when Congress — over President Barack Obama's veto — passed a law making it easier for families of people killed in the Sept. 11, 2001, terror attacks to sue Saudi Arabia.

In instances where the Saudi government has carried out its threats, the impact has been felt globally but without the desired outcome. The Saudis took part in the 1973-74 oil embargo against Western countries for supporting Israel and although that boosted global prices, it failed to achieve its goal of effecting political changes in the Middle East.