An oil spill in a creek in northeastern Kansas shut down a major pipeline that carries oil from Canada to the Texas Gulf Coast, briefly causing oil prices to rise Thursday.

Canada-based TC Energy said it shut down its Keystone system Wednesday night following a drop in pipeline pressure. It said oil spilled into a creek in Washington County, Kansas, about 150 miles (240 kilometers) northwest of Kansas City. 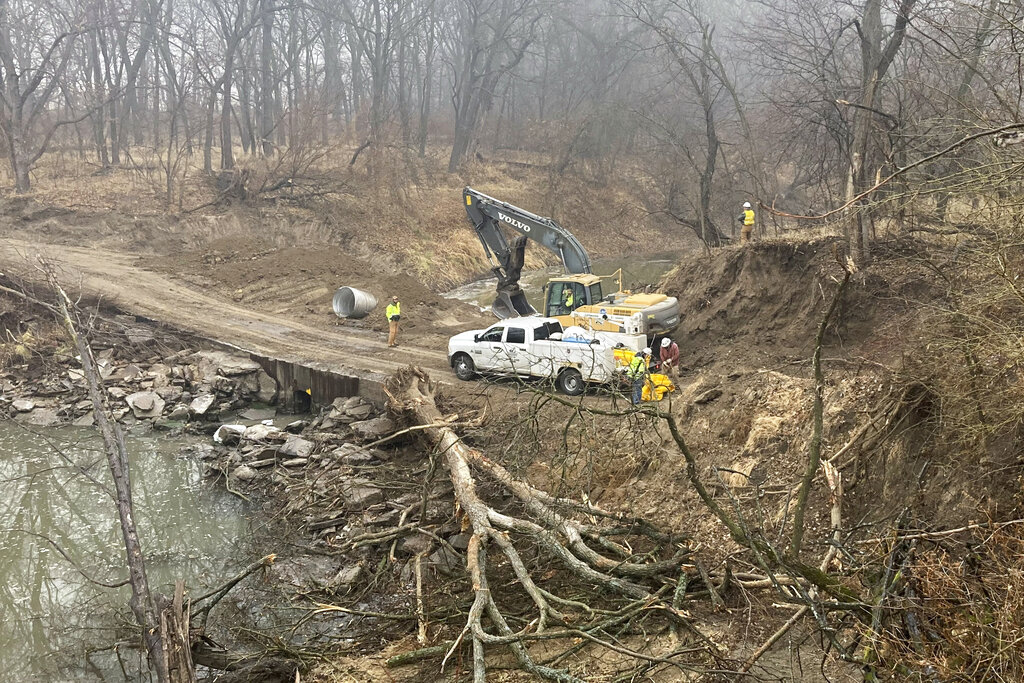 The company on Thursday estimated the spill's size at about 14,000 barrels and said the affected pipeline segment had been “isolated” and the oil contained at the site with booms, or barriers. It did not say how the spill occurred.

“People are sometimes not aware of of the havoc that these things can wreak until the disaster happens,” said Zack Pistora, who lobbies the Kansas Legislature for the Sierra Club's state chapter.

Concerns that spills could pollute waterways spurred opposition to plans by TC Energy to build another crude oil pipeline in the Keystone system, the 1,200-mile (1,900-kilometer) Keystone XL, which would have cut across Montana, South Dakota and Nebraska. Critics also argued that using crude from western Canada's oil sands would worsen climate change, and President Joe Biden's cancelation of a U.S. permit for the project led the company to pull the plug last year.

Janet Kleeb, who founded the Bold Nebraska environmental and landowner rights group that campaigned against the Keystone XL, said there have been at least 22 spills along the original Keystone pipeline since it began service in 2010. She said federal studies have shown the type of heavy tar sands oil the pipeline carries can be especially difficult to clean up in water because it tends to sink.

“All oil spills are difficult, but tar sands in particular are very toxic and very difficult, so I’m awfully concerned,” said Kleeb, who is also the Nebraska Democratic Party's chair.

But the U.S. Environmental Protection Agency said there were no known effects yet on drinking water wells or the public, and the oil didn't move from the creek to larger waterways. Randy Hubbard, the Washington County Emergency Management coordinator, said there were no evacuations ordered because the break occurred in rural pastureland.

TC Energy said it had set up environmental monitoring at the site, including around-the-clock air quality monitoring.

“Our primary focus right now is the health and safety of onsite staff and personnel, the surrounding community, and mitigating risk to the environment,” a company statement said.

Oil prices briefly surged at midday Thursday amid news of the spill, with the cost of a barrel of oil for near-term contracts rising by nearly 5%, and above the cost of oil contracts further into the future. That typically suggests anxiety in the market over immediate supply.

A U.S. Energy Information Administration spokesperson said the Keystone pipeline moves about 600,000 barrels of oil per day from Canada to Cushing, Oklahoma, where it can connect to another pipeline to the Gulf Coast. That’s compared to the total of 3.5 million to 4 million barrels of Canadian oil imported into the U.S. every day.

Past Keystone spills have led to outages that lasted about two weeks, but this outage could possibly be longer because it involves a body of water, said analysts at RBC Capital Markets in a note to investors. Depending on the spill’s location, it’s possible that a portion of the pipeline could restart sooner, they said.

“It’s something to keep an eye on,” said Patrick De Haan, head of petroleum analysis at GasBuddy, which tracks gasoline prices. “It could eventually impact oil supplies to refiners, which could be severe if it lasts more than a few days.”

The spill was 5 miles (8 kilometers) northeast of Washington, the county seat of about 1,100 residents. Paul Stewart, an area farmer, said part of it was contained on his land using yellow booms and a dam of dirt. The spill occurred in Mill Creek, which flows into the Little Blue River.

The Little Blue feeds the Big Blue River, which flows into Tuttle Creek Lake, north of Manhattan, home of Kansas State University. The EPA said the oil did not affect the Little Blue.

Dan Thalmann, publisher and editor of The Washington County News, a weekly publication, said crews were creating a rock path to the creek because recent rains made fields too soft to move in heavy machinery.

Chris Pannbacker said the pipeline runs through her family's farm. She and her husband drove north of their farmhouse and across a bridge over Mill Creek.

“We looked at it from both sides, and it was black on both sides,” said Pannbacker, a reporter for the Marysville Advocate newspaper.

Junior Roop, the sexton of a cemetery near the spill site, said people could smell the oil in town.

“It was about like driving by a refinery,” he said.