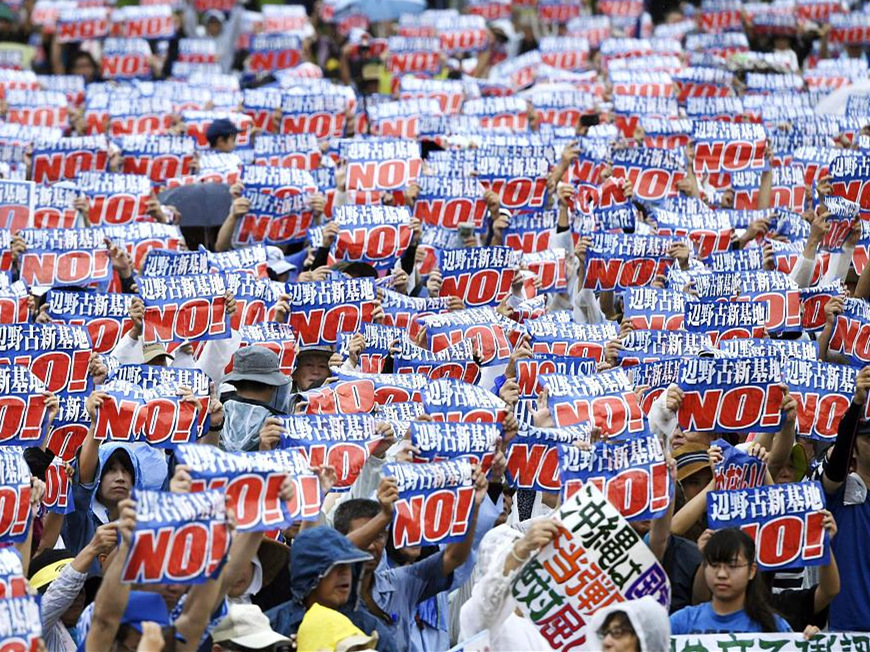 On August 11, 2018, about 70,000 people from Okinawa prefecture of Japan held a mass rally in Naha city to oppose the relocation of the Futenma military base to the Henoko coastal area of Nago city. The protesters demanded that the US troops stationed in Japan abandon the construction of a new base in the Henoko coastal area and immediately close the Futenma airport.  (Photo: VCG)

TOKYO, Sept. 5 (Xinhua) -- A civil group in Japan's Okinawa, having collected the signatures of some 93,000 people, demanded on Wednesday a local referendum to be held on the central government's controversial plan to relocate a US military base within the island prefecture.

Deputy Okinawa Governor Kiichiro Jahana, who took charge following the death of Governor Takeshi Onaga last month, said that he would convene a prefectural assembly meeting later this month on the referendum proposal.

According to the local autonomy law, citizens could request a referendum after collecting valid signatures from one-50th of all voters, which means 23,000 signatures in Okinawa.

However, whether the referendum could be held will still depend on the decision of the new Okinawa governor who is expected to be elected on Sept. 30.

Onaga, elected governor of Okinawa in 2014, was well known for his hard-line stance against the over-abundance of US bases and personnel in Okinawa, Japan's southernmost prefecture.

He was also a firm opponent of the central government's plan to transfer the US Marine Corps Air Station Futenma to the Henoko coastal area of Nago from a crowded residential district in Ginowan, Okinawa.

Onaga died on Aug. 8 at the age of 67 after cancer metastasized to the liver despite a pancreatic surgery in April.

Before he died, Onaga had ordered procedures to be started again to retract landfill work approval of the Futenma base relocation project, which was seen by the public as a last resort for the governor to stop the relocation plan.

The central government, however, has said that its intention to proceed with the relocation construction was unchanged.

Japan's central government had said that the relocation plan is "the only solution" for removing the dangers posed by the Futenma base to the crowded residential area of Ginowan without undermining the Japan-US alliance.

The Okinawa people, however, have called for the base to be removed from the prefecture, complaining of sufferings caused by aircraft noise, crimes committed by the US servicemen as well as safety concerns.