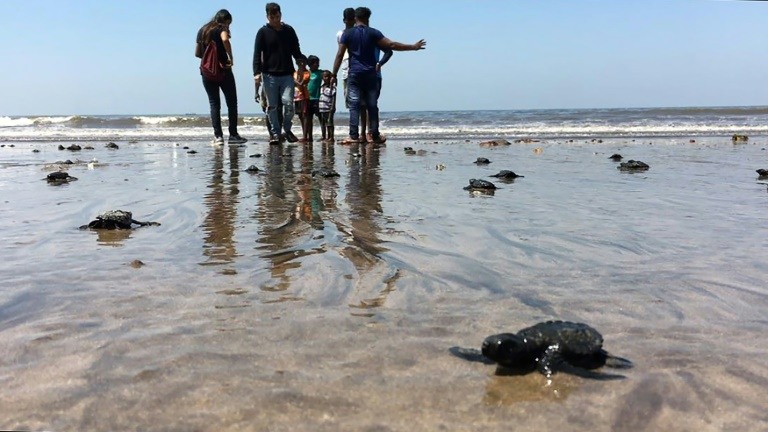 Olive ridley sea turtle hatchlings make their way to the Arabian Sea on Versova beach in Mumbai, as the species returns to India's financial capital for the first time in two decades after a major cleanup (Photo: AFP)

Tiny olive ridley turtles have hatched in India's financial capital Mumbai for the first time in two decades after a major cleanup of a beach, officials said Friday.

Dozens of the threatened species cracked out of their egg shells and slowly waddled their way into the Arabian sea off Versova beach on Thursday, delighting wildlife conservationists.

We found around 90-95 olive ridley hatchlings... and the volunteers safely released them to the sea," Prashant Deshmukh, an environmental officer with the Maharashtra state government, told AFP.

"The turtles have returned to Mumbai's coastline after nearly 20 years. This is big news and the clean-up drive seems to be yielding results," he added.

The turtles were spotted by environmental activist Afroz Shah and his group of volunteers who have removed thousands of tonnes of rubbish from Versova beach since starting a huge clean-up operation in 2015.

"Extremely elated the olive ridley turtles are back and it is a sign that things are improving. We need to do more to protect the ocean and other species including turtles," Shah told AFP on Friday.

Olive ridley turtles are known to navigate thousands of miles of open ocean to reach beaches, where they come ashore under the cover of darkness to dig shallow pits with their flippers where they deposit dozens of eggs.

The turtles are at serious risk from predators such as dogs and birds of prey during their 50-day incubation period beneath the sand.

Deshmukh said the forestry department would conduct round-the-clock surveillance and ban any excavation work on the beach to protect the young hatchlings.

With the majority of Mumbai's beaches notoriously dirty, owing to murky brown waters that regularly spew out garbage, residents took to social media to celebrate a rare good environmental news story for the teeming metropolis.

"Such amazing news! Flippers crossed that it's the first of many more!" wrote Bollywood actor Rahul Khanna on Twitter.

"When turtles turn-up to say thank you for returning to them what was theirs. you are a legend," tweeted filmmaker Shamsi Abbas.

The olive ridley turtle is also known as Pacific ridley. They are a medium-sized turtle species usually found in warm and tropical waters.