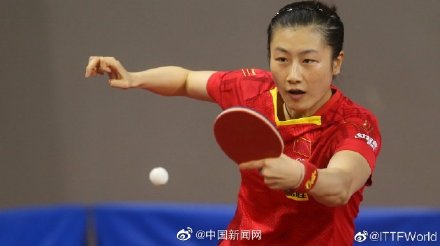 DOHA, March 7 (Xinhua) -- Olympic and world champion Ding Ning was the big name to be knocked out on Saturday after losing her women's singles semifinal to Japan's Ito Mima at the ITTF World Tour Platinum Qatar Open.

On the men's part, China secured three semifinal spots, as top-ranked Fan Zhendong and second seed Xu Xin both made it through with victories over European opponents while Wang Chuqin triumphed over Liang Jingkun in an all-Chinese matchup.

In the doubles play on Saturday, Japanese pair Mizutani Jun and Ito Mima rallied past their Chinese rivals Wang Chuqin and Sun Yingsha 11-8, 7-11, 11-4, 15-13 to lift the mixed doubles trophy.

Ma Long/Xu Xin and Wang Manyu/Zhu Yuling of China collected titles at the other two doubles events, as the men's duo beat England's Paul Drinkhall/Liam Pitchford and Wang/Zhu won over Japan's Kihara Miyuu/Nagasaki Miyu, both in 3-1.